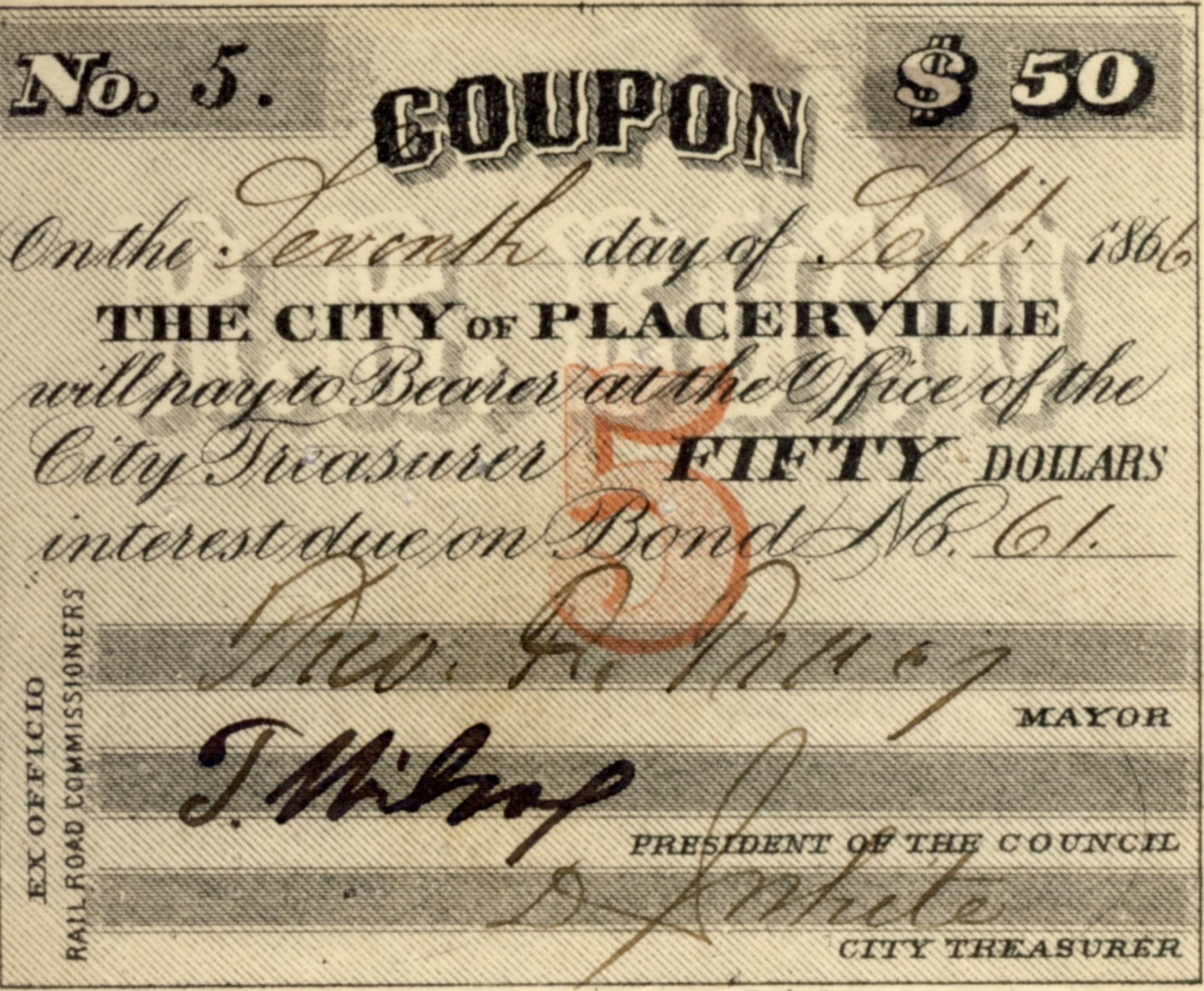 By June, 1865 the Placerville & Sacramento Valley Railroad had only reached Shingle Springs and, although it is now connected to the main road that carried nearly all of the freight and passenger traffic to and from the silver mines in Nevada’s Comstock, it was obvious that the railroad would not reach Virginia City by the 1866 Federal deadline.

The line had progressed only four miles in ten months while the toiling Chinese laborers of the Central Pacific were blasting out a mile a week over the “impassible” route towards Donner Summit.

Even in light of this lack of progress, the owners of the Central Pacific still feared that the rails of the Placerville & Sacramento Valley Railroad could still be extended over the Sierra and become a competing line, so they took steps to completely eliminate this problem.

In a questionable move, the Sacramento Valley Railroad’s President George F. Bragg finally convinced Lester Robinson and the bankers who held most of the railroad’s stock, that their problems were real and insurmountable. Though they were bringing in substantial income, there was no way additional financing could be obtained for construction or payment of their bonds. The railroad was on the verge of bankruptcy, Bragg told them.

On August 1, 1865, President Bragg purchased the entire stock interests of three other directors. Shortly thereafter, and in spite of the protests and claims of corruption in the press, he sold all of his stock to the principal stockholders of the Central Pacific. The Central Pacific took over control of the Sacramento Valley Railroad on August 16, 1865. The sizeable shops of the Sacramento Valley Railroad at Folsom were immediately dismantled and the equipment moved to Sacramento. In a final blow, Leland Stanford ordered the suspension of all passenger traffic to and from Freeport.

The 26.2 mile Placerville &Sacramento Valley Railroad, from Folsom Junction to Shingle Springs, had operated as its own company since 1864. Due to financial problems, on May 21, 1869 the railroad was foreclosed upon and on July 21, 1871 title was conveyed to William Alvord who, on the same day conveyed the title to the Central Pacific.

With the sale of the railroad the $500,000 in bonds that El Dorado County and the City of Placerville had issued passed to the purchasers, and they became a serious financial burden their citizens.

With the rapid loss in freight traffic through the County, due to the completion of the Central Pacific rails as far as Reno and a general reduction in all mining, the County and City were in a life and death struggle just to exist, let alone pay off the bonds which would mature in 1876.

In 1873, the holders of the bonds sued the County of El Dorado and the City of Placerville, to recover the entire amount due in principal and interest. The County defended the suit but lost in lower court. After much negotiation they were able to surrender the existing bonds for the sum of $200,000, which was paid in new bonds running twenty years, but only bearing five percent interest.

The City of Placerville had a simpler solution to the problem. When the telegraphed news of the bondholders winning the suit reached the City Council, they all simply resigned, leaving no one in charge or responsible for the payment.

The occasion of the arrival of the first passenger train brought out nearly all the residents of Placerville and the surrounding towns. With only five days advance notice, the city was cleaned up and preparations for the celebration had been made. As the 500 excursion passengers pulled into the station, they were greeted by the boom of cannon, the blare of brass bands, and the cheers of the thousands assembled there.

A large group of local citizens delivered welcome statements which were followed by an extended oration by Governor Waterman. Festivities continued with a large parade and finally concluded with a huge banquet.

Unfortunately, Colonel Charles Lincoln Wilson, the man whose dream created the Sacramento Valley Railroad, was not a part of the railroad when it finally reached Placerville. Way before the Central Pacific and then Southern Pacific took over the route, he had lost his seat on the Board of Directors of the Sacramento Valley Railroad, along with much of his investment, when in 1855 Lester Robinson attached the railroad through court action.