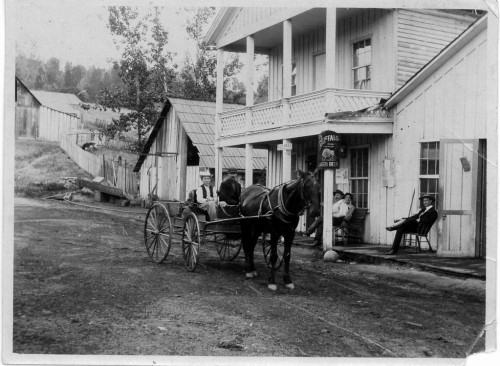 Not much was written about Fair Play and the surrounding communities during the early days of California. It was not because there was nothing going on in the southern part of El Dorado County during that time, but because most of the world’s attention was focused on the feverish mining activities nearer Placerville, Coloma and Sacramento, where the population was larger, the roads were better, communication was easier and, of course, where the newspapers were published. Because of this, we have only bits and pieces of information on the little, but very important towns like Fair Play.

The settlement of Fair Play and the many other communities in the area was a result of the discovery of gold in and along many of the nearby streams. This occurred only a few years after the first discovery of gold in Coloma as newly arriving miners found the good claims taken and set out to search for new, undiscovered deposits of gold. As in most other communities founded by miners, the gold soon gave out and many of the miners left to search for new deposits. But the region around Fair Play had attributes that much of the rest of the county lacked – like large stands of timber and deep, well drained, fertile soils. So, as time progressed the population remained fairly stable, the departing miners soon being replaced by farmers, ranchers and lumbermen.

The original settlement of Fair Play is attributed to two gentlemen, Charles Staples and N. Sisson, who arrived there around 1853. The story goes that some time after that the two apparently fell into a disagreement that grew into what must have been a not-too-gentlemanly fight. The fight ended when some of the other newly arrived residents appealed to them to “play fair.” Thus, we’re told, the town became known as Fair Play. Some time later, the name was shortened to one word – Fairplay – mostly for the convenience of various government agencies. But, that would change.

In its first few years the town grew by leaps and bounds as more and more rich deposits of placer gold where found in many nearby streams and ravines. Later, in the surrounding hills, mineable veins of copper ore were located.

In 1860 the population had reached that point that a post office was established in Fair Play with George Merkindollar as the first postmaster (he also owned the hotel that housed the post office). By that time the business section of town had grown from a few quickly erected tents to stores owned by Purrinton and Carr, A. Church and J. G. Carr, a saloon, butchershop, carpenter’s shop and a blacksmith. Mr. Merkindollar’s hotel and post office was later sold to M. N. Remich and then George Washington McKee.

Because of the quality of the soils for agriculture, by the 1870s numerous farms and ranches dotted the nearby countryside, taking advantage of the ditch water originally brought in by the miners. These farms and ranches provided fresh meat, produce and uncounted bushels of grain to the local towns and even communities many miles away.

The Fair Play School District was organized in 1890 with classes being held in private residences until a permanent school was built around 1902 on land donated by a John Barkley, the town blacksmith. The Fair Play schoolhouse that is now a private residence, about one-half mile south of the present town, is not the same one that shows up in many early photographs of the town. The original schoolhouse was very similar to the simple, one-roomed Mt. Aukum schoolhouse that is preserved several miles away on Mt. Aukum Road.

A fire would destroy most of the town in 1944 and, as a result, the post office that had been moved a distance away from the town in 1929, was closed and reopened in Somerset.
The store that had housed the last Fair Play post office would burn in 1956. One or two years later, the last buildings of the old town burned.

The bell in the tower of the Fair Play School would ring its last call to students in 1958 when Fair Play became part of the Pioneer School District.

Literally nothing remains of original Fair Play, except the cemetery. The town was located adjacent to the cemetery, about one-half mile east of the present town, on the south side of today’s Perry Creek Road.

As previously mentioned, over the years the original name for the town, Fair Play, had been shortened to one word, Fairplay. Wishing to start the process of returning the name of the town to its original spelling, the wineries and businesses of the area, with the assistance of the Somerset Postmaster, Karen Mickel, convinced the U. S. Postal Service to allow their mail to again be addressed to Fair Play (two words), instead of Somerset. At about the same time, the wineries obtained the designation of Fair Play as an American Viticultural Area because of its unique soils and climate.

The Fair Play area of our county continues to grow as an agricultural community with not only vineyards, but also Christmas Tree and flower farms, bed and breakfast Inns and restaurants.
Located between Placerville and the Amador County line, it can be easily reached by taking Mt. Aukum Road (E-16) south from Pleasant Valley Road.