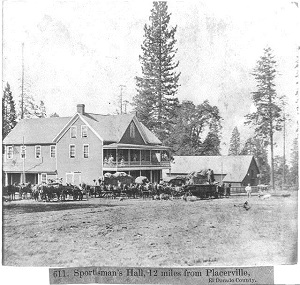 Many towns along the Mother Lode were named after early settlers who located there. These people were usually miners, farmers or ranchers who came to California before or shortly after it became a state and were the first to settle in an area. A few of the names that come immediately to mind are Georgetown, Jamestown, Sutter Creek and Kelsey.

But one town, Pollock Pines, was named after the people who actually created it, and they arrived here not during the Gold Rush, but early in the 20th century.

The part of El Dorado County that we now know as Pollock Pines was once just a spot along the Placerville-Carson Valley road that runs east and west over the Sierra Nevada. That is not to say that the area was uninhabited, quite the opposite is true.

Between Sportsman’s Hall and the Fourteen Mile House, which was located at what is now the parking lot at Safeway, there were two other stopping places for travelers along the road, the Illinois House (Twelve Mile House) and the Thirteen Mile House.

According to “The Pollock Pines Epic” by Marilyn Parker (1988), Sportsman’s Hall, at times called the Eleven Mile House (and sometimes Twelve Mile House), was originally owned by a D. C. Dealy, who in 1853 claimed one hundred and sixty acres at this location along the Placerville-Carson Valley Road, where he established a ranch and built Sportsman’s Hall.

The following year, he sold everything to John Blair, one of four brothers that had immigrated to America from Scotland.

John’s brother, James Blair, came west to join him about the time that silver was discovered in the Comstock Lode of Nevada. This discovery resulted in the Placerville-Carson Road becoming crowded with freight and passenger traffic to and from the mines.

Although the Blair brothers would become better known for J. and J. Blair Logging and Lumber Company, they took advantage of the rapidly increasing need for accommodations and enlarged Sportsman’s Hall to hold 150 travellers, also adding stables for 500 horses and corrals that would hold even more. In 1868 Sportsman’s Hall burned down and was immediately rebuilt to handle the traffic along the road.

With the completion of the railroad over the Sierra through Auburn and Truckee in 1869, traffic on the road became only a trickle of what it had been and the Blair brothers leased out the hall and returned to lumbering. For the next 140 plus years the ownership of Sportsman’s Hall passed through many hands. It still remains as one of the oldest restaurants in the Mother Lode.

Little is known about the Illinois (Twelve Mile) House, other than a reference in “The History of El Dorado County” by Paolo Sioli (1883) which mentions that it served groceries and meals all day and night.

Duncan McLean’s Thirteen Mile House was located at the site of the present Pollock Pines School. It burned in 1867.

The Fourteen Mile House became the George Holcomb House in the early part of this century. It’s location at the western terminus of Ogilby Road, near the Placerville-Carson Valley Road made it an important stage and mail stop.

Hiram Robert Pollock, his wife Anna and son Claude Earl arrived in this area around 1909.

H. R. “Hime” Pollock was an experienced lumberman from Michigan and he soon made his name well know in El Dorado County. He formed a partnership with Mr. DiGeorgi for the purpose of building a mill that would produce box grade lumber for the local fruit packing trade. Because of business problems, the partnership broke up and Hiram Pollock ended up with the unfinished mill and a lot of timber land.

Hiram borrowed money to complete the mill and he and his son, Claude Earl, worked hard to keep it going. Unfortunately, in 1932 it was completely destroyed by fire.

Left with only the land, Hiram looked around for a way to recoup his losses. He knew that the increasing number of people who were using the new State Highway to get to and from Lake Tahoe often inquired about property for summer cabins, so he and his wife Anna set out to answer their needs.

In 1935 the Pollocks started selling lots in a subdivision they created out of a piece of land that lay along the ridge, on both sides of Cedar Grove School. They called it Pollock Pines and the lots sold rapidly. People fell in love with the cool summer climate.

In May of both 1947 and 1948, Hiram and Anna Pollock filed additional subdivision maps creating more lots for the town that would retain their name.

Pollock Pines remained a quiet summer resort community for many years. Then, in 1959 SMUD started building its many dams in the Crystal Basin, several miles to the northeast. Employee housing was needed and, as a result, mobile home parks were rapidly built in Pollock Pines, further expanding the population.

Over the next several years, major subdivisions began to develop along Sly Park Road, between Pollock Pines and the new Jenkinson Lake that filled the meadow at Sly Park, once an important immigrant resting place along the Carson trail.

Although, like the Pollock subdivisions, these were originally planned and designed for seasonal, second homes, many people who built there soon sold their houses in the Sacramento Valley and Bay Area and became full-time residents of the community.

Over the past 60 years, Pollock Pines has grown from a very rural area into a large community with commercial centers and services of many kinds. Yet, in spite of this growth, it still retains its original rural flavor.

Anna Pollock passed away in 1949, followed two and a half years later by Hiram, who was 86 at the time. The town they started remains as a permanent monument to their memory.