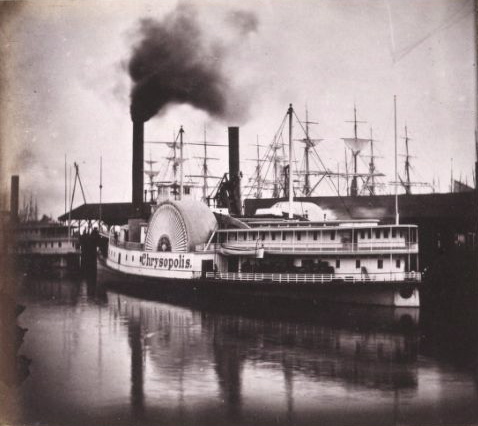 The agreement to bring the railroad to Placerville happened just a few months after Leland Stanford, now Governor of California, had lifted the first shovelful of dirt to start the building of the Central Pacific Railroad east from Sacramento. Unfortunately, what he did that day, October 10, 1863, would affect things seriously.

The Central Pacific’s rails were laid along side and crossed the earlier excavation and short trackage of Judah’s California Central near Roseville. The Central Pacific then continued its route on to Rocklin and Auburn.

It became apparent that the “Big Four,” Stanford, Hopkins, Huntington and Crocker, had gained the upper hand in the power play for the Pacific Railway financing, and they would be hard to stop.

By 1864 the rails of what had now become the Placerville & Sacramento Valley Railroad had only reached the small town of Latrobe, in southwestern El Dorado County.

Lester Robinson, now not only the engineer for the railroad but also a board member and major stockholder, along with the people of Placerville, still believed this route was a much better way over the Sierra Nevada than that proposed by the Central Pacific and set out to prove it.

Robinson challenged the owners of the Central Pacific to a contest of speed which they accepted.

On the day of the race, the steamer Chrysopolis would bring two bundles of San Francisco papers up the river to the terminus of each railroad. From there the challenge would be to see who could get them delivered to Virginia City, Nevada in the shortest period of time.
The Placerville & Sacramento Valley Railroad would pick up its papers in at its new terminus at Freeport and carry them by rail to Latrobe, there transferring them to the Pioneer Stage for the rest of the journey.

The Central Pacific would collect its papers in Sacramento, carry them to its end of track at Applegate, where they would be tossed onto the California Stage.

The owners of the Central Pacific knew that there was a possibility that the Chrysopolis might not be able to steam into the port at Sacramento, since the river was too shallow except at high tide, which would not occur at the correct time. In an openly dishonest move, the Central Pacific had a horseman waiting at Freeport to take their papers to Sacramento and save precious hours.

On August 22, 1864, at 11:15 P.M. the Sacramento Valley Railroad locomotive C. K. Garrison, pulling its normal complement of freight, mail and passengers, left Freeport and an hour and a thirty-seven minutes later arrived in Latrobe, 37 miles away. The Central Pacific’s locomotive Atlantic, bare except for its tender, crew and a Pony Express rider, left Sacramento at 12:04 A.M. on August 23 and made its 31 mile run to Applegate in only 42 minutes, setting the stage for the remainder of the race.

At one o’clock the next afternoon, the California Stage arrived in Virginia City with a total time of twenty-one hours for the papers from San Francisco. There was a very strong rumor that the Pony Express rider had carried the papers nearly to Virginia City and, at the last moment, hooked up with the California Stage. Nine hours later the challenging Pioneer Stage arrived at the same point, the exhausted driver explaining that the road from Latrobe had never been so crowded and that at every curve the road had been blocked by at least one big freight wagon.

The “Big Four” were known for not leaving things to chance, and the stakes here were too big for them to be defeated.

Viewing this as only a temporary set-back, the optimistic Robinson and his Placerville supporters formed the San Francisco & Washoe Railroad to build eastward to Virginia City, and sought legislation to financially assist them. The Federal Government agreed to give them aid, on the same basis as the Central Pacific received it, provided they could complete the line into Nevada by 1866. The Nevada Constitutional Convention also offered a subsidy to the first railroad to cross the state line.

Robinson argued to no avail before the Nevada Legislature that the Central Pacific did not intend to build a railroad to their State but only a wagon road, since their route was impassible for trains. He referred to their concept as the “Dutch Flat Swindle.” All of his arguing really made no difference, since the young State of Nevada had no money to give anyone, no matter what they promised.