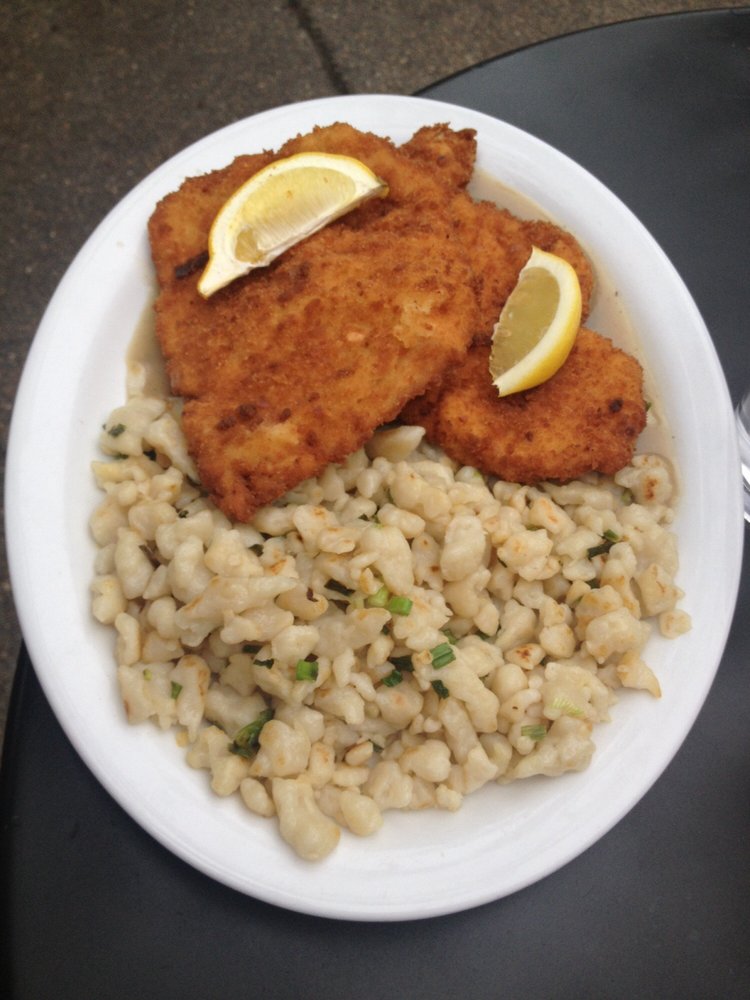 Every now and then a new restaurant goes unnoticed by me for a month or two, and then I spot it. That happened with this one, the Euro Bistro, which is located at 545 Main Street in Placerville, next to Town Hall and The Bagel Works.

Euro Bistro specializes in something different, food from Central Europe and especially the Czech Republic, and it is good, really good.
The owners are a delightful couple (I hope I get the spelling right) Zuzana and Zdenek Bartek and, yes, they are from the Czech Republic. They had a restaurant by this same name in the Bay Area for about 10 years and, before coming to Placerville, Zdenek worked as a chef at Hearst Castle.

To back up for a minute, if you don’t recall your history, in 1993 the country of Czechoslovakia, following the “Velvet Revolution” of 1989 and the Russian occupiers leaving, was peacefully divided into the Czech Republic and Slovakia.

The capital of the Czech Republic is Prague, sometimes called the “Paris of the East,” and the country is well known for its long history, ornate castles, native beers and food.

A group of friends and I spent way too little time in the Czech Republic about 20 years ago. On our drive from Budapest, Hungary, to Prague, we stopped for lunch at a restaurant called Marta’s Café which was in a large house in a small Czech town named Podivin. The food was wonderful and, because of this, I wanted to try the food at Euro Bistro to see how it compared.

My friend Russ Salazar and I dropped in for lunch one day last week and were greeted by a very nice lady named Dagmar, who was also from the Czech Republic and turned out to be a cousin of the owners.

When I saw Jagerschnitzel (also spelled Jaegerschnitzel), a breaded pork (or chicken) filet served with a mushroom cream sauce and spaetzle (a kind of soft egg noodle often pushed through a colander into boiling water) on the menu, I remembered fondly that is what I had that day at Marta’s. So I ordered it.

Russ chose one of the most common dishes found in that area of Europe, Beef Goulash, which came in a classic paprika sauce with dumplings on the side. He wanted to compare it to goulash he had tried elsewhere.

With our meal we also received bread, butter and a delicious salad made with fresh baby greens (including spinach), tomato slices, thin carrot slices, cucumber slices and olives. “This looks so good I’m even going to eat the spinach that I don’t like,” Russ told me.

When our entrees arrive, they were picture perfect. As is our normal routine, we divided them between us so we could both enjoy everything, and that we did.

The breaded pork loin was crunchy on the outside, moist and delicious inside, and it was not greasy. Both it and the spaetzle were complemented by the flavorful mushroom gravy.

Russ’ goulash was equally delicious and the beef was fall-apart good. Russ remarked that the slices of dumpling were perfect for sopping up all of the delicious gravy.

It was enough to satisfy a good appetite, but we still ended up ordering a serving of their house Apple Strudel with a scoop of ice cream. The strudel was full of shredded apple (not too sweet) and had a wonderful flaky crust. “I’m nor really a dessert person, but this is a lot better than Cos…’s,” Russ commented.

The menu at Euro Bistro begins with “Starters,” like potato pancakes, fried cauliflower, fried cheese, fried mushrooms, Spanakopita and salmon potato pancakes. Those are followed by several delicious sounding salads and soup (it was too hot for soup the day we were there).
It continues with a list of “Small Plates” that are available until 4 p.m. The list includes Chicken Gyro, sausage, spinach crepe, Chicken Paprikash crepe, Bohemian potato pancake and a sausage plate.

The “Czech Specialities” (lunch portions available until 4 p.m.) come with bread and butter and soup or a small salad. These dishes include Schnitzel, Jagerschnitzel, Goulash, Chicken Paprikash, Roasted Pork, Roasted Duck, Svickova (tender beef seasoned and marinaded in vegetables that are then pureed into a savory sauce) and a sausage platter.

For dessert, if you have room, you can choose from their Apple Strudel, Sweet Crepes, Fruit and Custard Strudel and a Chocolate Roladen.

If you want to add something, they serve lots of sides to go with your meal, like: dumplings, Spaetzle, fries, potato salad, cooked sauerkraut, red cabbage and even avocado. On top of that, every day they add several special dishes to the menu.

To go with your meal they have the normal sodas, etc., and three Czech beers on tap: Pilsner Urquell, Staropramen and Krusovice.
Euro Bistro is located at 545 Main Street in Placerville, and is open from 11:30 until 9, Tuesday through Sunday. Closed Monday. For more information give them a call at (530) 306-6670.

As a side note, when I stopped back to talk with Zuzana, the lady who delivers the mail walked in, and as she was leaving, stopped and said, “This place really smells good. I’m going to have to come back for dinner.”

Me too. Next time with more people so we can share more dishes.