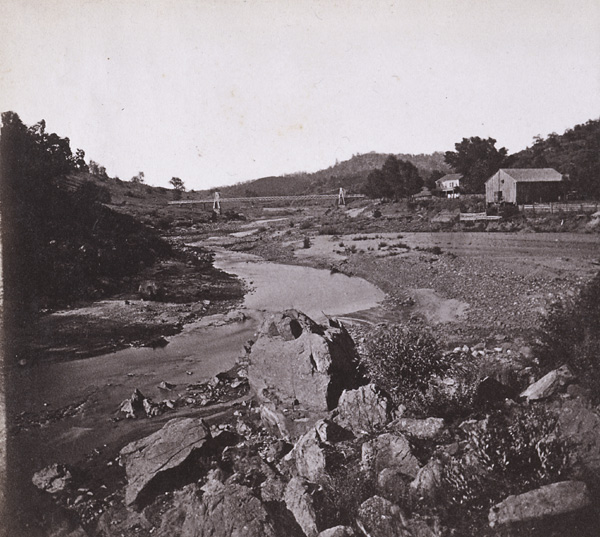 About nine miles south of the town of El Dorado is the town of Nashville, which for a time was known as Quartzville, Quartzburg and even Tennessee Bar. It is the one still remaining of a group of towns that existed near the Cosumnes River along the main road running between the northern mines and the southern mines (now Highway 49).

These towns, Nashville, Pittsburg Bar and Yeomet (which was also known as Saratoga, Yornet and Huse Bridge) were small communities located on flat pieces of land downstream from the confluence of the Middle and South Forks of the Cosumnes River.

The northern towns, Nashville and Pittsburg Bar were originally mining locations, while Yeomet, on the Cosumnes River, was the only nearby place where there was a ferry, and later a bridge, to cross the river.

A. L. Chilton arrived in Nashville in 1851 and immediately constructed a store and boarding house. Soon another store was opened by a Dr. Thurston and his brother Joel, who after a number of years, would move north to the town of El Dorado.

The Nashville School District was organized on October 5, 1869. The school building was located along the Cosumnes River, near what is now Highway 49. The school was closed in 1953 when it merged with the El Dorado School and later the Mother Lode Union School District.

The Nashville post office was established prior to March 5, 1852, with Elias DeYoung as Postmaster. On June 20, 1854, it was closed and less than a month later, on July 14, 1854, one was opened at Yeomet, which the Post Office renamed Yornet, the local Indian word for waterfalls or sounding rock.

Eustace P. Bowman was the first Postmaster at Yornet and served until the Post Office was closed and moved south to Jackson on June 8, 1861.
One would wonder why a Post Office in El Dorado County would be moved to an Amador County town. The answer is simple, Yeomet was part of El Dorado until the boundary was moved north from Dry Creek to the Cosumnes River and Amador county was created.

In 1854 that the State Legislature realized that people living between the Cosumnes and Mokelumne rivers were not being taxed by either El Dorado or Calaveras county. Apparently the separation from the two county seats was too far to make it convenient to collect taxes, or too difficult because of the necessary river crossings. They realized that this problem wasn’t going to go away so that year they formed a new county from portions of El Dorado and Calaveras counties.

Three miles to the east of Nashville, Dr, Duncon (Duncan?) kept a ranch as early as 1851. His nearby neighbors, brothers George and John McDonald, were gold miners. George would later represent El Dorado County in the State Legislature for two terms.

Just south of Nashville and north of the new county line was Pittsburg Bar. Like Nashville, the first miners in this area named the location for the place they had left.
One of them, Dick Butler, was a former superintendent of the U. S. Arsenal at Pittsburgh and in 1850 had served as the County Clerk for Sonoma County. He had left both of those good jobs to seek gold, driven to do so, some say, by “demon drink.” Butler was buried a few miles to the west, in the Sugar Loaf region, near the base of the very mountain from which the region was named.

The Grosh brothers were engaged in mining in the Sugar Loaf region, at a place known as Hise’s ravine. These two young men were reportedly quite adventurous, being best remembered for having been the discoverers of the celebrated Comstock silver lode near Virginia City, in Nevada.

One of them would die in Washoe (Nevada) as a result of a pick wound to his foot, while the other perished trying to cross the Sierra Nevada in the dead of winter.
When Henry T. P. Comstock learned of the death of the Grosh brothers, he claimed their cabin and the lands as his own, giving his name to the discovery.

Over the years Nashville and the other towns slowly declined, both because of the miners moving on to find greater riches and the conversion of the lucrative, privately owned ferries, toll bridges and roads into public ownership.

The several underground mines in the area: the Central or Inez, the German, the Lone Star, the Havillah, the Nashville and the Montezuma-Apex would continue to be worked on and off for many decades, the population increasing enough in the 1870s to justify the re-opening of the Nashville Post Office. But, mining would again go into decline and even the post office would close and move the mail to the town of El Dorado in 1907.

By the mid-twentieth century mining would effectively stop and the town of Nashville would be the only one of the group of communities that would remain, now consisting of private homes and ranches, a resort and the eternal, but presently closed, Nashville Cantina & Grill.