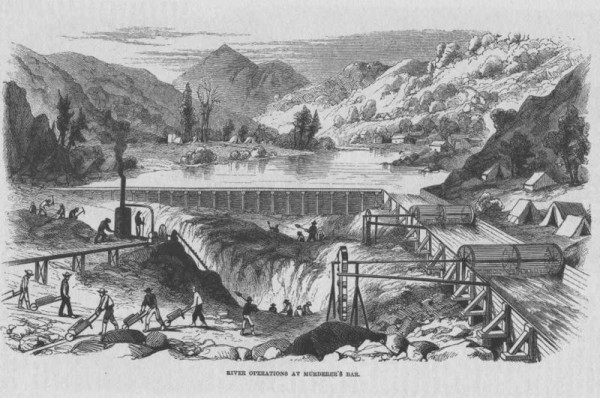 Among the names given to the mining camps of early California, none is more accurately descriptive than the one given a camp on the Middle Fork of the American River – a camp named “Murderer’s Bar.”

Although it sometimes shows up on maps at different locations, we do know it was some three or four miles up river from the Middle Fork and North Fork junction and a couple of miles downstream from Spanish Flat and Spanish Dry Diggings. We also know how it came to get this name.

The Middle Fork of the American River was one of the richest mining regions in California and it was estimated that at least ten thousand men were working there by the fall of 1849. During that time this army of miners extracted some 10 million dollars in gold from its gravel. Unfortunately, among the many hard working miners that came here, were a few who were less than honorable.

In the summer of 1848, a group of sailors arrived at Sutter’s Fort with a considerable quantity of gold dust. Among the men at the fort was a J. D. Hoppe, who was acquainted with the sailors and to whom they disclosed the source of their gold: the Middle Fork of the American River.

Mr. Hoppe engaged a group of seven men, one being Thomas M. Buckner, a former resident of Kentucky and Oregon who had arrived in California shortly after hearing of the gold discovery. The eight set out for what they called “Sailor’s Diggings,” where they discovered good quantities of gold.

Because they knew little about the area, they believed the trapper’s tales that is was impossible to over-winter in the Sierra Nevada. So, when the rains came they left.
Buckner decided to spend the winter in the hills behind Oakland, making redwood shakes and pickets. It was there he met Capt. Ezekiel Merritt, who had been very involved in the Bear Flag revolt at Sonoma in 1846.

In April of 1849 the two, accompanied by an Indian boy called Peg, set out in the direction of Sailor’s Diggings. Crossing the South Fork of the American River a few miles west of Coloma, and then proceeding up over the divide and down into the canyon of the Middle Fork, they came upon a waterfall and attempted to mine the large hole it had made in the riverbed.

Not having much success, and surprised that they had not seen any other white men but many signs of Indians, they carefully proceeded down river to the head of a large bar on the south, or El Dorado County side of the river.

With Capt. Merritt in the lead, the party rounded some rocks where they were startled to find evidence of a plundered camp, the hair (scalps?) of both white men and Indians and a large pile of ashes that contained burned bones.

Capt. Merritt immediately grabbed his rifle and slowly lead the group downstream where they encountered some sixty or seventy Indians who were on the hill above them, yelling and gesturing in a frightening manner. The miners stood their ground and soon the Indians, who were armed with only bows and arrows, left.

Returning to the location of the destroyed camp, Merritt took out his knife and cut into the bark of an alder tree the two words: “Murderer’s Bar”.

Deciding it was not safe to stay at this location, the men crossed the river to the Placer county side, where they established a camp that would be known as Buckner’s Bar.
Had the three stopped in Coloma they would have been forewarned of this massacre and the series of acts that led up to it.

A few weeks earlier a party of seven Oregonians had been prospecting in the area of the confluence of the Middle and North Forks of the American River. There, they encountered a large group of local Indians who appeared to be friendly.

Unfortunately, one or more of the miners decided to take improper liberties with some of the Indian women, which outraged the men of the tribe. A squabble erupted, the white men drew their guns and three of the Indian men were shot dead.

Immediately, the miners mounted their horses and rapidly rode a few miles up the river where they camped on the bank. The next day two of the miners left to prospect in a different direction while five stayed to work the river.

After an absence of several days, the two returned to find signs of a fight and that their compatriots had been murdered. Although this was obviously in retaliation for the shootings a few days earlier, the two angry miners struck out for Coloma, where they managed to stir up the miners to attack and kill several of Marshall’s Indian employees, thus starting what was later called the El Dorado Indian War.

By 1850 Murderer’s Bar had become a large village, mostly as a result of jointly owned water flume that had been built by a cooperative group of miners from New York Bar, Vermont Bar, Buckner’s Bar, Sailor’s Claim (Sailor’s Diggings?) and Murderer’s Bar.

The first stores were kept by E. C. Cromwell, from Michigan and a Mr. Moss, from St. Joseph, Missouri. The first hotel was built and run by a C. Cooledge. The first white woman to arrive here was Mrs. A. Harris, who later moved to Greenwood.

Over the next few years, the camp continued to grow, and even though it was a difficult place to reach, its population warranted a visit by the Lee & Marshall’s National Circus, which had previously performed at Rattlesnake Bar, several miles down river.

Unfortunately, the government did not seem to feel it warranted a Post Office, so miners had to work out their own way to get their mail from one of the nearby towns, such as Greenwood.

Soon, the gold would become harder to find and, since all supplies in the canyon were very expensive – having to be brought in on horseback – the miners moved on to try their luck on the North Fork of the American, the Yuba and Bear rivers.