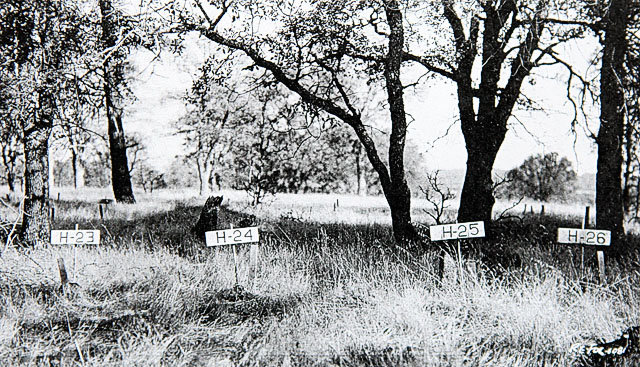 Negro Hill, a town on the South Fork of the American River about one-tenth of a mile east of the Sacramento County line, is just one of many early California mining camps named for the miners of African-American descent.

There are two towns by this name in El Dorado County, this one and another three miles northeast of Placerville, along with one each in Tuolumne, Calaveras and Placer counties.

There are also a number of towns in the Mother Lode with names like Negro Bar, Negro Gulch, Negro Flat, Negro Slide and Negro Bluff. According to Gudde’s “California Gold Camps” the presence of only one “blackamoor” in a camp was a good enough reason enough to give it this name.

The first mining done in the area of Negro Hill was by a company of Mormons in 1848. They worked on the east side of the hill, near the American River. Later in the same year, a group of Spaniards started mining on the south side of the hill in a place that would be called Spanish Ravine.

In the fall of 1849, August B. Newhall, from Lynn, MA, an African-American by the name of Kelsey, a Methodist preacher and others, started working a deep sand bank at the mouth of Spanish Ravine. The gravel in this area, located between the river and Negro Hill and near what would be called Little Negro Hill, yielded $300 dollars or more per day to the company of five men.

The deposits of gold on Little Negro Hill itself were discovered in the fall of 1849 by Cornelius Van Noy, George Denett, Thomas Burns, Platt Southard, M. Fogety, John Farley and John Donelly. They carried the dirt to the river and washed it in a “long tom” (a long sluice box) earning two or three ounces of gold each per day. Soon, three men, Messrs. Vosey, Long and French started a store and boarding house known as the Civil Usage House at this location. Shortly thereafter, a Mr. Fish built another store nearby and did a good business up until 1852.

In the spring of 1852, Conrad Benninger, Harvey Smith and Darius Clark started digging on a large flat, the second bench back from the river, and found more gold. Within a week most miners had moved to this location and had the whole area staked and claimed.

Here, two African-Americans from Massachusetts started a store, around which quite a large village called Big Negro Hill sprung up.

On another portion of the flat, some white miners built quite a town, the town which would become the historical town of Negro Hill.

Soon, Thomas Jenkins and Richard Rickard built a store and Thomas Bennett and William Trengove built a boarding house, both being the first in town. In the same year, 1852, Dewitt Stanford, a brother of Leland Stanford, built a grocery store at Negro Hill as did two brothers, Horace and Frank Barton. This was followed by another store built by Benjamin Avery (later a minister to China).

In the fall of 1852 or spring of 1853, the Chinese would arrive in this area, building a town on another part of the flat.

By the end of 1853 Negro Hill had a multi-racial and multi-cultural population of one thousand to twelve hundred inhabitants, stores of every description, and the usual dozen or more saloons and dance houses. Strangely, even with that large a population, it never had a Post Office of its own.

In 1853, Leander Jennings and Alexander Fraser brought water to Negro Hill by building a ditch from Salmon Falls, a distance of eight miles. In a short time, nearly the entire top of the hill had been sluiced off.

In 1855, this ditch was supplemented by one build by Messrs. Clark, Boyd, Richards and Eastman. Their ditch not only served Negro Hill, but other nearby mining camps known as Growler’s Flat, Jenny Lind Flat, Massachusetts Flat, Chile Hill, Condemned Bar and Long Bar. Because of this Negro Hill became the business center for the area.
Soon business declined as nearly all of the white miners left the area or took up farming, leaving the mining to the Chinese. Most of the good claims had been cleared of their gold and those that had not been mined, were too high up to be easily served by the available ditch water.

Although a significant majority of the time this large, racially diverse group of miners worked and lived together peaceably, the area was not without problems.
In 1852, at the time Jenkins and Richards were building their store, an African-American by the name of Andrew Jackson stole a gold specimen worth about $10 and some clothing from the residence of the blacksmith, Mr. Keith. Unfortunately, he was immediately captured and hanged by a mob from a tree.

Two years later, in 1855, a lot of drunken white fellows attacked the African-American quarters, killing one of them. A Mr. Drew and others were arrested and tried at Coloma, but were acquitted.

The towns of Negro Hill, Growler’s Flat (supposedly named for an English sailor who always “growled”), Massachusetts Flat, Jenny Lind Flat and the other nearby mining towns would ultimately be inundated by Folsom Lake.