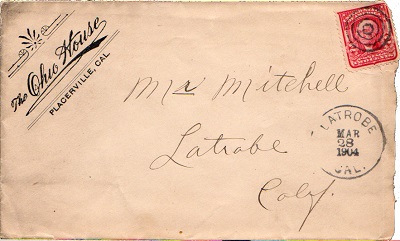 It’s hard to imagine that the small town of Latrobe, which is located in the most southwestern part of our County, for a short period of time was a “boomtown.” And, it was a direct result of the discovery of silver in the Comstock Lode at Virginia City, some 150 miles to the east.

In the early 1860s when the Comstock became the center of mining in western North America, the people of Placerville approached the Sacramento Valley Railroad demanding that rail service be extended from Folsom to their town to carry the heavy freight that was heading over the Sierra to Nevada.

The construction of the Central Pacific Railroad eastward through Placer County had commenced and they were concerned that a railroad would not pass through Placerville and extend on along the wagon road to Nevada as they desired.

The owners of the Sacramento Valley Railroad informed the delegation from Placerville that, if El Dorado County would grade the route from Folsom and furnish ties, they would supply the rails for ten percent County Bonds.

For this venture a new company, the Placerville and Sacramento Valley Railroad, was incorporated and the people of El Dorado County approved the issuance of $200,000 in ten percent bonds. The City of Placerville, also anxious for the railroad, pledged $300,000 in bonds towards this end (the railroad would not reach Placerville for another 25 years and Placerville, like El Dorado County, would ultimately default on the bonds).

Construction of the railroad from Folsom Junction towards Placerville began in late 1863 and the trains arrived at what would soon be the town of Latrobe in August of 1864. A station was immediately constructed to serve not only the traffic to the east but also to the south and the new County of Amador that had been created out of portions of El Dorado and Calaveras counties in 1854.

The Chief Engineer for the railroad, F. A. Bishop surveyed and platted the town into small lots and, while doing so, suggested the name of Latrobe for it in honor of Benjamin H. Latrobe, the civil engineer for the first railroad in the United States (There is some question whether Latrobe, Pennsylvania is named after him or his father, a famous architect of the same name, who designed the Bank of Pennsylvania and rebuilt the U.S. Capitol after the British burned it in 1814).

Latrobe was the eastern terminus of the Placerville and Sacramento Valley Railroad for only a moment in time since within a year the rails reached Shingle Springs, which replaced Latrobe as the freight terminus for everything being shipped eastward. But this didn’t stop Latrobe from growing since, for quite a few years, the town would control the trade of Amador County with eight daily stages carrying travelers and goods in all directions.

According to the “History of El Dorado County”, by Paolo Sioli (1883), the land of the town, some 240 acres, was owned by J. H. Miller who gave Bishop one-half of it for the survey work. Some 75 or 80 lots were sold at auction, all of which were occupied by the purchasers.

Miller had opened the first store a year before the railroad arrived, and soon sold out to W. Kirkland. Riebsam & Adams followed with another store and soon the town had six or seven stores, four hotels (Miller quite an entrepreneur, also built the first one of these) three blacksmith shops, one wagon and carriage factory, two drug stores, several butcher shops, a bakery, three doctors and a population of about 800.

The Latrobe post office was established on Oct. 11, 1864 with A. George Davis was the first postmaster. Service at the Latrobe Post Office was discontinued on May 31, 1921 and the mail moved to what was then known as the Shingle (later Shingle Springs) Post Office.

By the 1880s the population had dwindled to about 80 people with one general store, one hotel, a telegraph and express office, two blacksmith shops and one carriage and wagon shop remaining, along with a two-story public school building, that was used for all public assemblages, and halls built by the Masons and Odd Fellows.

For the next three quarters of a century, Latrobe remained a quiet, rural agricultural community with large family held ranches devoted mostly to the raising of livestock.
In the mid 1960s, the area to the north, known as El Dorado Hills, began to develop because of its convenient proximity to Sacramento due to the new Highway 50 freeway. That created increased pressure for development in the Latrobe area.

Although some of the large land holdings in the Latrobe area have been divided into smaller parcels, most of the citizens of the Latrobe area have resisted further development. The town that was once a busy commercial center with streets filled with freight wagons and stage coaches is again a quiet, rural community.