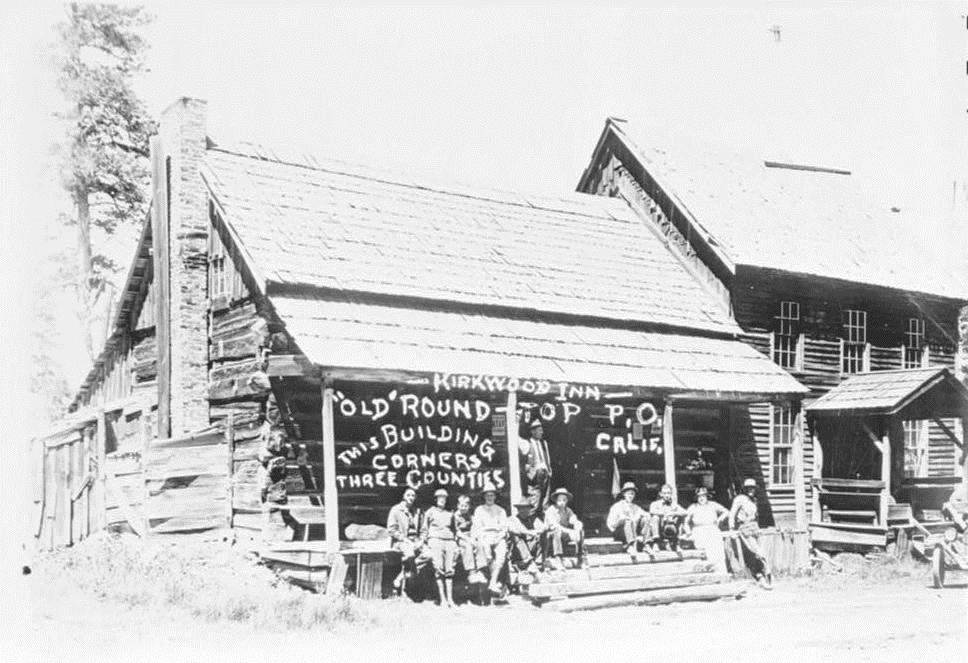 There were many inns or stations along the original Kit Carson emigrant trail over which the early pioneers who braved the treacherous trip overland into California traveled. As it was with other early roads, the inns and trading posts were located at very close intervals along this road, which, after significant modification, a portion of which would become a part of Highway 88.

Places with names like the Hope Valley Hotel, Hoboken Hotel, Shipley and Dupont’s at Tragedy Springs and Leak Springs Trading Post disappeared when this immigration route, much of which had been pioneered by a large group of Mormons heading eastward towards Salt Lake City, was soon replaced by the easier Johnson’s Cut-Off route along the American River Canyon to Placerville.

When the mines in the Comstock area of Nevada came into production, this road, which had become the boundary between El Dorado County and the newly formed Amador County, was improved as a route to Nevada from Amador County. It would be along this road, in a high mountain meadow, that a dairyman named Zack Kirkwood would summer his herd.

In 1861, the citizens of Amador county unsuccessfully attempted to issue bonds to improve a connecting road from a point about 25 miles east of Jackson to the immigrant trail. In May of the next year they were more successful and obtained the backing of the voters.

Eight citizens of Amador county were given the franchise to build the road and collect tolls along it. Bonds were issued at 12 percent interest to finance the road which was to be 16 feet wide with no grade of more than 18 percent. By August of that year the road reached Silver Lake. Just a couple of months later it connected with the immigrant road on a ridge just east of Tragedy Springs (Iron Mountain Road / Mormon Immigrant Trail intersection with Highway 88).

Freight wagons used what soon became known as the Amador-Nevada Road, Amador Wagon Road or Alpine Highway to haul Amador County produce and lumber to the Comstock mines, although most traffic going that way continued to pass through Placerville and up the American River Canyon.

In 1864 Zack Kirkwood decided that the increased freight traffic along the road warranted a new stage station and inn, which he constructed from local logs just north of the road, inside El Dorado County. This inn would serve travelers, immigrants and teamsters for many years and its floor would become well worn from the numerous dances and parties held in the bar. As simple as it was, it would end up outlasting all of the other stops along the road.

Kirkwood and his wife, Elizabeth, lived in a log cabin nearby and, during the summer, watched their dairy cattle graze in their large meadow. When, in 1864, Alpine County was formed out of a portion of El Dorado, Amador and Calaveras counties, the Kirkwood’s barn and milk house ended up in Alpine County and the bar at the inn was split in two by the line between Amador and El Dorado counties.

Kirkwood would entertain travelers for hours with stories about “fooling” the tax collectors by driving his herd of cattle back and forth between the three counties that merged on his property when they showed up.

On January 25, 1887, the Roundtop post office was established at Kirkwood’s place, with Zack himself serving as the first postmaster. The name for the post office came from the nearby peak if that name that stood some 10,380 feet high. On August 31, 1907, the post office was closed and moved to Jackson.

After Zack passed away, Elizabeth would close the inn and make it into her summer home.

One of the Kirkwood’s sons, Walter, managed the mountain property and, in the company of his mother, drove the cattle from the valley to the mountains in the spring and back in the fall. Their other son, George, married a Margaret Holtz and they had a daughter who married John Digitali, a member of another dairying family.

Years later the area, now known as Kirkwood Meadows, would become a world class ski resort. The Kirkwood Inn would again become a popular stopping place along what is now Highway 88.

Directly in front of the inn can be found the marker that Zack often talked about, the official marker where El Dorado, Alpine and Amador counties converge.