LATROBE: This post office was established on Oct. 11, 1864, when this small town, thirty-seven miles east of Sacramento City, was created as the eastern terminus of the Placerville & Sacramento Valley Railroad. A. George Davis was the first postmaster.

The Chief Engineer for the railroad, F. A. Bishop surveyed and platted the town into small lots and, while doing so, suggested the name of Latrobe for the new town, in honor of Benjamin H. Latrobe, the civil engineer for the first railroad in the United States.

There is some question whether Latrobe, Pennsylvania is named after him or his father a famous architect of the same name who designed the Bank of Pennsylvania and rebuilt the U.S. Capitol after the British burned it in 1814.
Service at the Latrobe Post Office was discontinued on May 31, 1921 and the mail moved to what was then known as the Shingle (later Shingle Springs) Post Office. 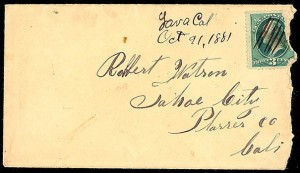 LAVA: The Lava Post Office, located thirty miles north of Placerville, near the present site of Volcanoville, was established on Sep. 9, 1880 with Jeremiah Saucerman serving as the first postmaster. The name came from the type of soil in the area. It was discontinued only a short time later, on Oct. 11, 1881, and the mail moved to Placerville.

LITTLE NORWAY: This high mountain post office, sixteen miles east of Kyburz and five miles west of Meyers, was established on Sep. 2, 1961, when the mail was moved here from the Vade Post Office (Phillips), three miles to the west. Don Peterson was the first postmaster. The Little Norway Post Office is now closed.

LOTUS: This post office, located two miles west of Coloma and ten miles northeast of Green Valley, was established on Jan. 6, 1871 with George W. Gallanar serving as the first postmaster.

An early mining town, Lotus was formerly known as Marshall and Uniontown, although it never had a post office by either of those names.
The present name of the town, according to some historians, was chosen because “the inhabitants of the community were as easy-going as the lotus eaters of the Odyssey.” The Lotus Post Office is still in operation.

LOUISVILLE: This early post office was established prior to July 28, 1851, the date when the first postmaster, George C. Blodgett, was confirmed by Washington, D.C.
The name, Louisville, had been given to this 1848 mining town, thirteen miles east of Auburn, by the miners working here, who were from the city by that name.
On Oct. 9, 1852, just a short time after being established, the Louisville Post Office was moved and its name changed to Greenwood.

LOVER’S LEAP – The Lover’s Leap Post Office was established on Oct. 30, 1919 with Annie M. Scherrer serving at the first postmaster. It was located between Strawberry Valley and Camp Sacramento and was named for the rock that rises a sheer 1,285 feet above the South Fork of the American River.

There is a legend that an Indian girl plunged from that height because her love was unrequited, thus, Lover’s Leap. Service at this post office was discontinued on July 31, 1929 when the mail was moved one mile to the east to Camp Sacramento.

MACKSVILLE – This is a phantom post office at an unknown location.
Some historical books mention a post office by this name but there is no supportive evidence in the archives of the Post Office Department in Washington, D.C. There may have been a post office at a location commonly known as Macksville with a different name.

MEEKS BAY – This seasonal post office was established on May 9, 1929 with Oswald Kehlet as its first postmaster. Its name comes from Stephen H. L. Meeks, a “mountain man,” who operated in the area of this present resort site on the west side of Lake Tahoe in the 1850s.