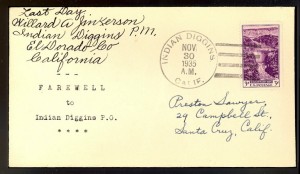 INDIAN DIGGINGS: This post office, four miles south of the town of Omo Ranch, in the southern portion of El Dorado County, was established on Nov. 22, 1853 with Jacob Wolf as the first postmaster. The name came from miners finding a group of Indians mining along the creek.

Service at the post office was discontinued on June 15, 1869 when it was moved one and one-half miles to the northeast and the name changed to Mendon.

The Mendon Post Office had been first established on Dec. 2, 1857 with J. Edmondson as postmaster. The community was generally known as Brownsville, but Mr. Edmondson wanted to name the post office after himself. The Post Office Department would not allow him to do that, so he rearranged some letters from his name and came up with Mendon.

With the closing of the post office, the name Mendon was dropped and the town was again called Brownsville.

JAY HAWK: This short-lived post office was named for the area which had been first settled by members of the ill-fated “Jayhawkers Party”, a group of 1848 gold seekers (not from Kansas, but from Missouri, since Kansas wasn’t a state yet). It was established on Aug. 29, 1860 with John S. Tipton as the first postmaster.

There is no specific location for the post office in the federal archives (ghost post office), but it is known that it was about ten miles southwest of Coloma and twelve miles northeast of Folsom City. On Dec. 26, 1863 the post office was discontinued and the mail moved to Folsom City.

JOB’S STORE: This was a phantom post office, for which there are no official records. The Aug. 2, 1858 issue of the “Sacramento Union” erroneously reported that the Postmaster General had appointed Mosses Job as the postmaster of a post office by this name near Lake Tahoe.

JOSEPHINE: Located fifteen miles northeast of Georgetown, the Josephine Post Office was named for the Josephine Gold Mine, which was nearby. It was established on Aug. 12, 1895 with Jerome C. Akley serving as the first postmaster. On Oct. 31, 1917, the post office was discontinued and the mail moved to Georgetown. 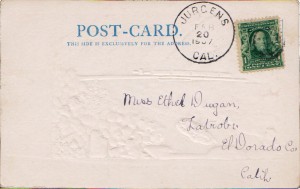 JURGENS: Named for its first postmaster, Annie G. Jurgens, this post office was located six miles southeast of Rescue. It was established on July 1, 1903 and discontinued on the last day of December in 1914. The mail was moved to the post office at Rescue.