In El Dorado County there were, at one time or another, over 100 post offices with some 120 different names. Some had a short life and some apparently never even existed at all, although history books make reference to them. The latter were appropriately called phantom post offices. Many others, once established, continue to operate until this day.

BIJOU: This early post office was established at this town on the south end of Lake Tahoe on September 11, 1888, when it was moved here from Rowland, about one and one-half miles to the west. The Rowland Post Office had been established on June 26, 1874, and was named for Bernard F. Rowland who developed this vacation and recreation resort and it’s first postmaster was Sophonia Rowland.

Bijou was named for the French word for “jewel” and was originally a lumber center, before becoming a vacation resort. The Bijou Post Office was discontinued on March 24, 1967, when mail service was taken over by South Lake Tahoe Post Office. Bijou’s first postmaster was Anthony W. Ransey. 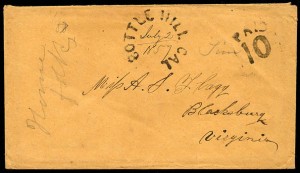 BOTTLE HILL: There are at least three stories behind why this mining camp near Georgetown, where a post office was established on May 28, 1855, was named Bottle Hill or Bottle Hill Diggings.

The first story contends that some miners paused here in 1849 while searching for gold and saw a bottle under a bush. Picking it up, they found it was full of whiskey, which they soon consumed. Believing it was an omen, they went to mining on the hill, starting this camp four miles north of Georgetown.

The second story mentions some miners coming across a pile of bottles at this location.

The third, and most likely story, says that the town was named after a nearby bottle shaped hill in the Hornblende Mountains.

The Bottle Hill Post Office, where Samuel M. Jamison had been the first postmaster, was discontinued on August 17, 1859 and moved to Georgetown.

CAMINO: The Camino Post Office, most likely named for the Spanish word for road, was established on June 22, 1904.

The community, seven miles to the east of Placerville, was at one time was known as Seven Mile House, although there was no post office by that name.

The Camino Post Office, which is still in operation, is listed as being four miles east of Smith’s Flat and two miles west of Fyffe (believed to be Sportsman’s Hall, although the distances are incorrect). The first postmaster for Camino was Margaret S. Hoff.

CAMP RICHARDSON: This summer or seasonal post office, located at the south end of Lake Tahoe, was named after the first postmaster, Alonzo L. Richardson and has a confusing history involving other post offices and name changes.

Originally, there was a post office called Lake Valley. It was officially established on September 17, 1861. However, the August 2, 1858 issue of the Sacramento Union reports a Lake Valley Post Office with Martin Smith serving as postmaster. It should be noted that this same issue of the Union listed another Tahoe basin post office, Job’s Store, with Mosses Job as postmaster and there is no official record of such a post office ever existing.

The “official” Lake Valley Post Office, which was at the location of the Pioneer Stage Line Company station known as “Yank’s Station”, was discontinued on December 26, 1863 when its name was changed to Taho, a corruption of the Washoe Indian word “tahooee” meaning “much water”, with Underhill Van Wagner as its first postmaster.

The Taho Post Office was discontinued on December 20, 1870 when its name was changed to Tallac, an Indian word meaning “large mountain”, and Ephraim “Yank” Clement designated as the postmaster. A few months later, on February 15, 1871, the name of the post office was changed back to Lake Valley.

The Camp Richardson Post Office was discontinued on October 9, 1964. It was reestablished as an Independent Rural Station of Tahoe Valley on June 1, 1965 and became a Rural Branch of South Lake Tahoe on March 24, 1967. It was discontinued on January 15, 1973.