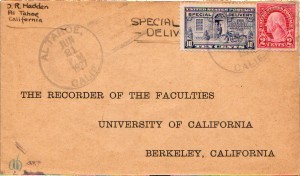 In El Dorado County alone there were, at one time or another, over 100 post offices with some 120 different names ranging through the alphabet from Alabaster to Zodok. Some had a very short life and some, like Coloma, the first post office in El Dorado County, continue to this day. Then there are a few, like Job’s Store, Lake Bigler and Macksville, that apparently never even existed at all, although mentioned in history books from the period. Because of this confusing information, these are often referred to as phantom post offices.

Because a majority of the early population of El Dorado County was made up of miners – a transient group if there ever was one – many post offices were established and then, moved, discontinued (closed) and even reestablished, all in a very short period of time.

If someone found gold in a different place over the mountain or up or down the river, the whole town might move overnight to the new location, always believing that there they would finally strike it rich.

In order to serve the miners, the local post office often just picked up and moved with them. If there was an existing post office at the new location, the two were combined. If none existed, the relocated post office simply reopened, sometimes changing its name and sometimes not. In fact, occasionally the name changed even when the post office didn’t move. All of this provides an interesting view of the history of El Dorado County, its post offices and the movement of its residents over the past century and a half.

ALABASTER: Named for the limestone that was mined in the area, this post office was established on March 23, 1883, having been moved to this location on the western edge of El Dorado County from Rattlesnake (Bar) in Placer County, were it was first established on November 1, 1854 with Thomas Woods as postmaster. The first postmaster at the Alabaster Post Office was William E. Donahoo.

On July 10, 1888, the post office was closed and moved to Newcastle in Placer County. Most of the Alabaster area is now part of Folsom Lake Recreation Area.

AL TAHOE: Located at the south end of Lake Tahoe, two miles west of Bijou, the name of this post office was derived from two things, the name of the lake and the diminutive of the first postmaster’s given name – Almerin R. Sprague. It was first established on August 11, 1908 and changed to a branch of the Bijou Post Office on October 12, 1963. On August 10, 1964 it was made an Independent Branch of Bijou and on March 24, 1967, after the incorporation of the City of South Lake Tahoe, it became a Station of the South Lake Tahoe Post Office.

On April 9, 1920 the Uno Post Office was discontinued and the mail moved back to Aukum. Because much of the mail destined for Aukum went instead to Auburn, the U. S. Post Office Department officially changed the name of this post office to its present Mt. Aukum on October 28, 1961.

The location for this town named for the nearby peak is officially listed as five miles north of Oleta, the original name of the post office at Fiddletown in Amador County. Aukum, often spelled Aurum, Oakum or Orcum, is apparently derived from a Miwok word, which may be the word Ochum, one of the names they gave their dwellings. The first postmaster at Aukum was Lydia A. Wrigglesworth (Wigglesworth?)

AURUM CITY: Named for the Latin word for “gold”, Aurum City was not a city at all, but a gold camp two miles to the southeast of the townsite of El Dorado. The post office at this camp that was often spelled “Auram” on maps of the time, was established on July 6, 1852 and discontinued on November 22, 1853 when it was moved to the town of El Dorado, which was also known as Mud Springs. The first postmaster at Aurum City was John S. Bostick.

Sources for this story include, “History of California Post Offices, 1849-1976”, researched by H. E. Salley (1976); “The Gold Rush Mail Agents to California and Their Postal Markings”, by Theron Wierenga” (1987); “California Town Postmarks, 1849-1935”, by John H. Williams (1997); “Short Stories Regarding The History of South El Dorado County”, by D. A. Wright (undated); the “History of El Dorado County”, by Paolo Sioli (1883), reprinted and indexed by the El Dorado Friends of the Library (1998); and the archives of the Mountain Democrat (on microfilm and computer accessible at the El Dorado County Main Library).