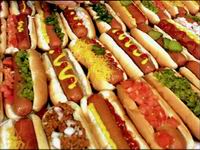 “Laws are like sausages, it is better not to see them being made.”
Otto von Bismarck

We are very lucky in having quite a number of places in El Dorado County that serve great hot dogs: Shoestring, Hangtown Hot Dogs, Buttercup Pantry (even deep fried), Old Town Grill (a circular dog), Skeeters in Pollock Pines and Ruffhaus Hot Dog Co. in El Dorado Hills, just to name a few. However, now and then I go outside the area just to compare.

About three months ago I wrote about a visit my friend, Russ Salazar, and I made to try several hot dogs in the Sacramento area. It was not the first time, as a few months before that we had traveled to Capitol Dawgs, at 1226 20th Street in Sacramento, where we had enjoyed several of their offerings.

I gave Capitol Dawgs an “A” for variety. They have eight kinds of dogs from regular to turkey and veggie, most of which you can have grilled or deep fried and served 25 or more different ways.

We tried a “Prop 51 Dawg” (Chicago style), “Delta Dawg” (West Virginia style with mustard, chili, onions and cole slaw) and the “Governor Dawg” (their own Texas Tommy style with a deep fried American and Swiss cheese stuffed beef frank wrapped in bacon, cheddar cheese, cheddar cheese sauce and tomato). They were all good (Salazar was not wild about the cole slaw on the dog), but I need to return to try several more.

The Wiener Works is located at 5207 Madison Avenue, near Auburn Blvd. For over 20 years it has been in the same location. They take cash only, are a bit pricy, have no WiFi and, as someone commented, really haven’t given the place a thorough cleaning since they opened. On the plus side, the food is great, they steam their dogs in beer and, I’m told, they either make their own sausages or have them made for them.

They have lots of different sausages in different sizes, but we stayed small and ordered a chili dog and, something different, a red cabbage (cooked) and cheese dog, both of which we liked.

Parker’s of Santa Cruz is located in Roseville at 1604A Douglas Blvd (by Office Depot). Their dogs are “Old Fashioned Foot long 100% Beef” and more reasonable than those at Wiener Works.

We ordered a “Pick-Me-Up Chili Dog,” and a Ruben Dog. When we got the food, we commented to each other, “Who puts all these beans in the chili for a chili dog?”

The dogs were solid and good, the buns were good and the kraut on the Ruben dog was tasty and not so juicy that it soaked through. But, shouldn’t a Ruben dog have Russian or 1000 island dressing, not just kraut and cheese?

Sonic – America’s Drive-In” is also in Roseville, at 913 Pleasant Grove Blvd, and is a real drive-in, with carhops on roller skates (some of them). They also have some outside tables, which is where we chose to sit.

Their specials at the time were Wholly Guacamole Dog and the Chili Cheese Fritos Coney. We ordered one of each and asked for water to drink (25 cents – but it was a big cup and came with ice, a cover and a straw). The dogs (and the napkins) are a bit skimpy, but what do you expect for under three bucks and two bucks respectively? Both the dogs were okay (the Wholly Guacamole Dog was best), but more than a bit salty and soft. Overall they were worth the cost.

Last week we added to our list and visited two new places for dogs: Burgerocity and The Wienery.

Burgerocity is located at 157 Iron Point Road in Folsom, next to the Folsom Premium Outlets. They specialize in fresh, Certified Hereford Beef burgers (which we also tried), but we were there to try a hot dog. We selected a Chicago Dog and, to accompany it, their Texas Chile Fries.

The Chicago Dog had a nice firm hot dog, but the bun needed to have been warmed, since both it and the burger bun were cold (the burger could have also used a bit more sauce). The fries were very good, even though the chili had a few beans (we think they use Delores Chili like Tommy’s in Southern California). A real plus for the place is both pump catsup and mustard for your fries. Give them a call at 916-351-5777 or visit www.burgerocity.com for more information.

The Wienery is located at 715 65th Street in “East” Sacramento, tucked away in the Elvas Shopping Center. The restaurant has been there for 45 years, 29 as a hot dog place (counter with stools and a few tables). Their motto is” “We still cut the mustard.”

They use a long, Casper-like, casing dog that, along with the buns, is steamed. We split a Windy City Dog and a Chili Dog, both of which were very good. The Windy City Dog was their version of a Chicago Dog and the Chili Dog came open faced and is served on a real plate with a real knife and fork (grab lots of napkins).

They also have daily specials and soup. They used to make hot dog gumbo (a family recipe), but don’t anymore.

For more information and directions (you will need them) call 916-455-0497 or visit www.thewienerysacramento.com.