On the north side of Highway 50, just to the west of El Dorado County, there is a sign saying that you are traveling on the “William Alexander Leidesdorff, Jr. Memorial Highway.” Few people know of this person, but he was one of the Founding Fathers of California, and likely of African descent.

The name William Alexander Leidesdorff is not as familiar as many of the others we know from the era when California was still controlled by Mexico. He was an astute businessman who came to California in 1839 and by 1841 had settled in Yerba Buena (later known as San Francisco).

He constructed and opened the first hotel in that city, served as its treasurer, opened its first school and even served as Vice Counsel for the United States.
Soon after his arrival, he became a Mexican citizen which allowed him to acquire a huge land grant. His 35,000 acre cattle ranch, which was known as “Rancho de Los Americanos,” would lie to the east of John Sutter’s Fort at “New Helvetia” and contain today’s City of Folsom.

In 1848, just after the discovery of gold at Coloma and the acquisition of California by the United States, Leidesdorff died of typhus and was buried at Mission Dolores in San Francisco. He was 38. 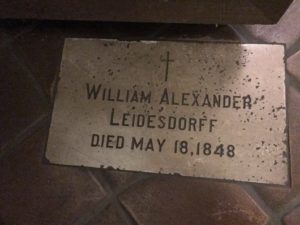 In memory of this early pioneer, there is a five block long street in San Francisco named for him.

That much we know for sure. The rest of the story about him comes in at least two versions.

A substantial majority of those who have written about Leidesdorff, place the year of his birth as 1810 and the place of his birth in the Danish West Indies (often St. Croix). His mother was an unmarried mullato woman and his father was either a Danish sailor or a Danish man involved in the sugar cane industry.

As a young man Leidesdorff traveled to the eastern and then southern part of the United States where he was befriended by a New Orleans plantation owner and became wealthy.

In his late 20s, he fell in love with a French woman. Unfortunately, his mixed racial background came to light and her family forbid the marriage. She, we are told, died of a broken heart.

Leidesdorff ran away to sea and in 1839 arrived in California. We know what happened from there on. But, let’s go back and look at a different version of Leidesdorff’s early life.
The 12 volume “Jewish Encyclopedia,” published between 1901 and 1906, has a significant discussion about William Leidesdorff (or Leidesdorfer) that differs from this account.
According to it, he was born not in St. Croix in 1810, but probably in Szathmar, Hungary about 1802 . “He was the son of Mordecai Leidesdorff. (His cousin Yitl (Henrietta) married Akiba Eger, and their daughter married Moses Sofer (Schreiber),” it also states).

He left his home when about fifteen years of age, and his family never heard from him again. The encyclopedia then states, “A tradition became current in the Eger and Schreiber families that he had ‘gone to America’ and ‘become a great man.’”

He went to San Francisco (Yerba Buena) in 1840, but his history before his appearance there is obscure.

In Jamaica he passed as a native of Danish extraction. On leaving that island he went to New York, and subsequently to New Orleans, in which latter city he held the office of ‘Captain of the Port.'”

That, you can see, is much different from the first version and from there the story gets even more interesting.

The generally accepted version of what happened following Leidesdorff’s death has Capt. Joseph Libby Folsom going to St. Croix and buying all of Leidesdorff’s holdings including his San Francisco properties, from his mother for $75,000.

When the rest of Leidesdorff’s family heard about gold being discovered at Negro Bar, they believed that they had been taken and filed suit in a California court, claiming that they had been swindled and that not all of the legal owners of the property had sold their share to Folsom. Unfortunately for them, there was an 1850 California law that would not allow blacks, or any other non-whites for that matter, from testifying against whites in a court of law.

The version provided in the “Encyclopedia” is similar to this, but adds a few important points. It indicates that Leidesdorff died without a will and that Captain Folsom was appointed administrator of his large estate. Folsom visited Jamaica and “found some ‘relatives’ – even a woman who claimed to be Leidesdorff’s mother – and purchased the claims of all these people.”

But they obtained no standing in court. The uncertain condition of the probate laws, together with the fact discovered that William Leidesdorff, though he had held federal offices, had never been a citizen of the United States, and the additional fact that these Jamaica ‘relatives’ had sold titles to Captain Folsom which the courts could not approve, created so much confusion regarding the estate that, in 1854, Governor Bigler, in a special message to the senate, recommended the escheat of the estate (reversion of the property to the state), then worth a million and a half dollars, and suggested that proceedings be commenced for its recovery (“Journal of the Senate of California,” 1854).”

The “Encyclopedia” continues, “Another reason why the courts refused to admit the title of the Jamaica relatives was that there were ‘other heirs, who had never conveyed away their rights in the estate’ (Sweasy, “Early Days and Men of California”). These ‘other heirs’ lived in Europe.

“While Leidesdorff passed as a Christian and was buried in a Roman Catholic churchyard, he had never been known to be identified with any church. Some of his intimates claimed to have known that he was of Jewish extraction.

He is said to have been a man of fine appearance, ‘swarthy’ (Sweasy), and of an irascible temperament. He never spoke of his relatives; he never married; and, though conducting a great establishment, he practically lived alone.

The following facts appear in connection with his estate: (1) The claims of his Jamaica ‘relatives’ were thrown out of court, their evidence of relationship being summarily rejected. (2) No Danish family of the name of Leidesdorff ever appeared to claim the estate of William Leidesdorff of San Francisco. (3) Since 1854 the descendants of the Leidesdorfers, and the Eger and Schreiber families of Hungary, through legal representatives, have continued to contest the escheat of the estate, and have established their claims to the satisfaction of many eminent attorneys, though there is at the present time (1904) not the remotest chance of their recovering anything, the statute of limitations covering and protecting every title obtained from John L. Folsom and others who acquired possession.”

Whether one of these versions is true and the other wrong, we will probably never know. As with many stories, including some of those that are daily reported in the news, the truth may actually lie somewhere in between. One would think that after a century and a half we would be able to sort out historical facts about early California from fiction or rumor. Unfortunately, even though there were newspapers and books being written and published as this occurred and many of the early settlers were well educated, literate people who kept meticulous journals, that is not always the case.