It is February of 1898, one hundred years ago, and the firemen in Placerville are concerned about the tower that holds the fire bell in the plaza on Main Street. For twenty years this wooden bell tower has served its purpose well, holding the bell that often called all of the City’s volunteer firemen, day or night. But, the wood in the 25 foot high tower is rotting and the whole thing, bell and all, is in serious danger of falling down.

This wouldn’t be the first time there has been concern about Placerville’s famous Bell tower and, as we will see, far from the last.

The first bell tower at this location was erected in 1865, to hold a bell that had been cast in England, some five years previously. On July 16 of that year, the City had agreed to allow a tower for a fire alarm bell to be constructed in the plaza and appointed a committee to look into the matter. The committee must have done its job well, because only one month later they were discharged, having accomplished their duties. On September 4, 1865 a report to the City’s Council states that the tower is painted, erected, the bell installed and a horse watering trough placed at the base. Total cost, $391.12.

Thirteen years later, on August 31, 1878, a contract was made with Rider & Young to tear down the old tower, clean up the site, build a new wooden tower 25 feet in height, give it three coats of paint and hang in it the bell. On September 16, the citizens were called upon to contribute proportionally to help pay the contract price of $149.50. As mentioned before, twenty years later the firemen would be concerned that this tower might have become more of a danger to the citizens of Placerville than a benefit.

On February 26, 1898, the Fire Department’s chief engineer, John Wonderly, was told to estimate the cost of a new, 50 foot steel tower to replace the existing wooden one.

Around August 6 of that year, the Fire Department contracted with the El Dorado Foundry for a steel tower, the height to the bottom of the bell frame to be 35 feet, putting the bell 15 feet higher than before – tall enough to overcome the muffling effect of the surrounding buildings. The base for the tower was to be 11 feet square, with angled posts and cast iron ornaments, and placed on a concrete foundation. 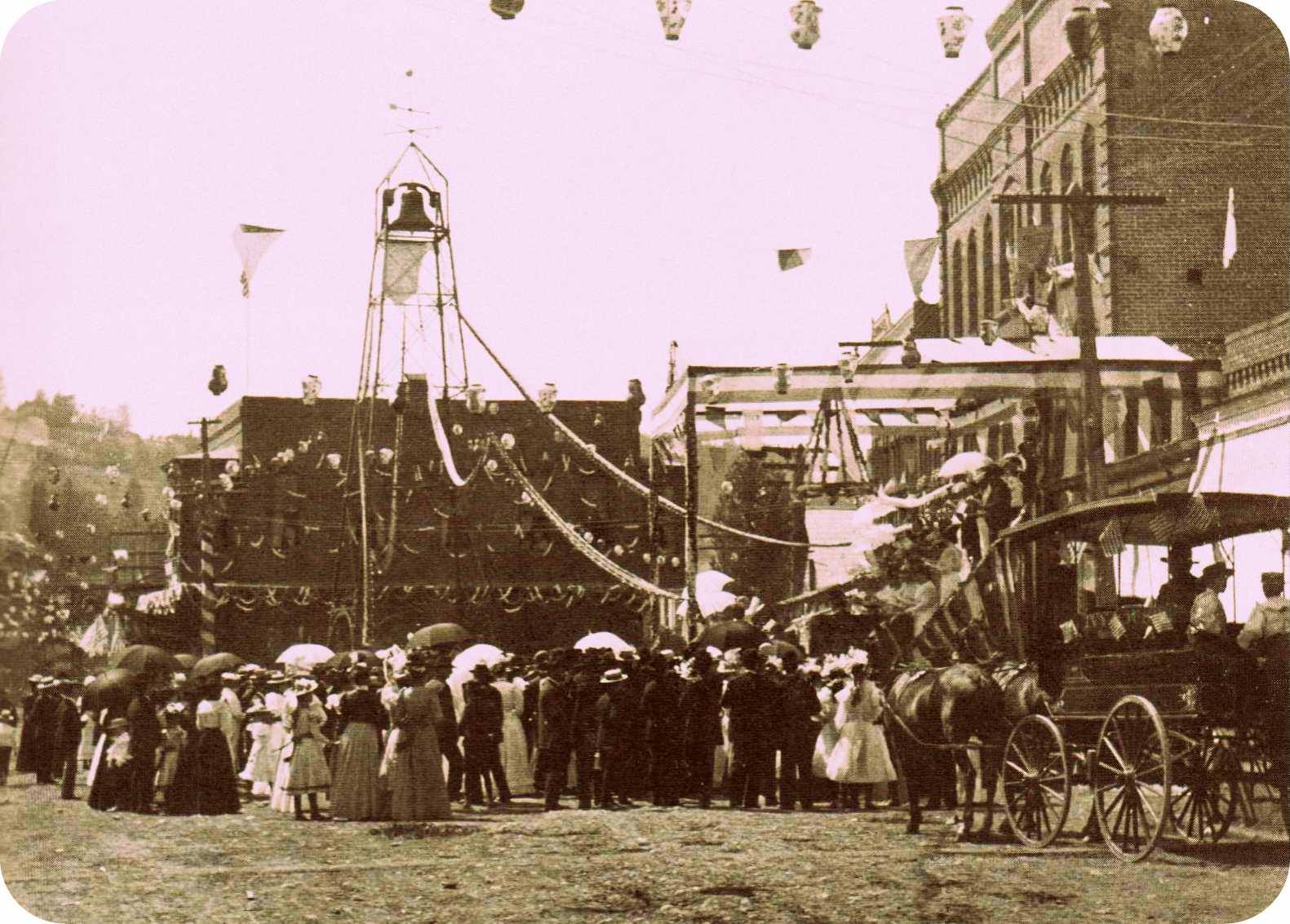 Celebration at the Bell Tower

The Mountain Democrat of September 3, 1898 reported that the new steel tower was complete and being “tastily” painted. It was also noted that during the construction, half the population of the town turned out to “boss the job and give advice free of charge.” The article went on to say that Morton & Sons are placing a concrete drinking fountain in the center of the base (the water cooled by a coil suspended in the cistern under the tower) capped with a miniature bronze fireman holding aloft a red globe containing an electric light. Atop the Bell Tower is to be a large weathervane and at its base, the usual wooden horse watering trough. The cost of this fine structure was $300, half of which was contributed by the League of Progress.

At noon on Thursday, September 8, 1898, as a part of a three-day California Admission Day ceremony, the bell in the tower was rung three times, announcing to the world that the task was complete and the Bell Tower was being turned over to the citizens of the City.

During the next century several changes were made to the Bell Tower. Around 1911, it was even disassembled and moved to Cannon Hill, where electrical difficulties in ringing the bell developed. So, it was soon moved back to its original location. Unfortunately, sometime during the move the bell was damaged and many of the ornamental supports were lost. It was probably during this period in the Bell Tower’s history, that a new, electrically activated bell was installed, the 1865 bell being removed and placed to rest proudly in the park on Bedford Street across from the Court House. 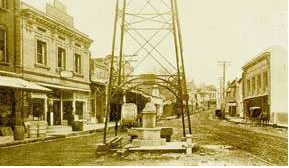 By the 1930s, the drinking fountain, horse watering trough and even an added bandstand had disappeared, and the space under the Bell Tower had become a shady parking place for a City Police patrol car. Added to one of the supports was a police telephone that, when called, lit a red light on the tower and at each end of the block to summon the police. Soon, all of this would be removed and the Bell Tower would become just another part of the downtown landscape.

Over the next few decades, the Bell Tower began falling into disrepair and becoming a “tawdry billboard”, according to the late historian Claire Freeman. It became just a place to hang various signs and announcements, along with miscellaneous decorations. Then, in April of 1965, something happened that again focused attention on this historical landmark – a car ran into it and nearly tipped it over. All at once the Bell Tower became the center of discussion among the citizens of Placerville. It was in very bad shape and the question of the day became: “Should it be renovated or torn down and replaced with something else?”.

The Placerville Business and Professional Council immediately started things moving by suggesting to the City Council that the Bell Tower was a landmark and should be retained and fully renovated. Unlike the committee of 1865 who were able to make immediate decisions, the town pondered the issue for some three or more years with numerous pro and con discussions about whether the Tower should be retained or “replaced with a meaningless but pretty Hollywood type decoration”. 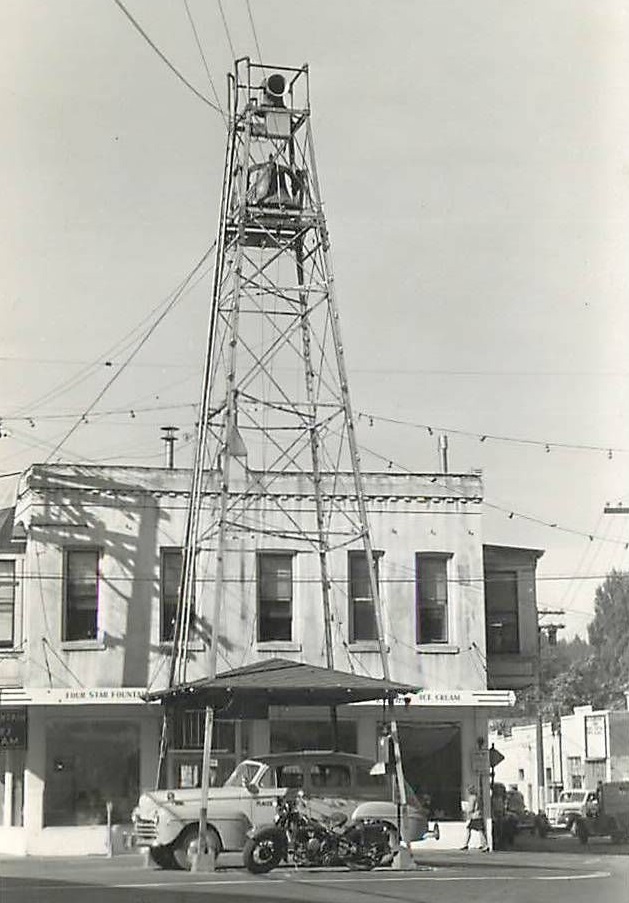 Most of the oldtimers continually pointed out that fire had was still the scourge of the Mother Lode and that Placerville had literally burned to the ground as the result of two fires in 1856. They believed the Bell Tower was still needed to call the fire department’s volunteers and, by all means, should be retained for that purpose.

Even though the Bell Tower openly continued to deteriorate, interest in what to do with it waned. Fortunately, the Mountain Democrat, in several editorials, urged the citizens to get on with a decision one way or another, before the Tower fell down by itself – perhaps on someone.

Under pressure from various groups and organizations that wanted to preserve the Bell Tower, in 1968 the City Council took action – of a sort – and passed the problem onto the Hangtown Chamber of Commerce. Under the chairmanship of Barbara Luther, a committee began to explore the problem and things finally began to happen. The Chamber of Commerce’s recommendation was a new plaza with a modified version of the Bell Tower and other accessory items.However, according to the July 10, 1969 Mountain Democrat, local historical groups, the Placerville Volunteer Fireman’s Association and downtown merchants, such as Florence Sweeney and George Duffy, inundated the City Council with requests to renovate and keep the Bell Tower. Mr. Duffy, whose front door is just a few feet away from the Bell Tower, bluntly told the Council that he objected to replacing it with any “Mickey Mouse fountains and other such incidentals.”

After listening to all sides, the City Council voted 3-0 to retain and renovate the Bell Tower, clearly stating that it would no longer be permitted to serve as a fixture on which to attach signs promoting various community and commercial activities.

Things were finally moving forward and the City’s Mayor, Forrest Van Vleck, appointed a committee to report on the renovation activities. With much help from the community in general (including a large amount of voluntary supervision as in 1898) and the firemen in particular, the present design with protective rock planters around the base, iron railings and an internal wooden roof, was accepted in late 1969 and the project was completed the next year. In late 1970 the siren was installed above the bell and the magnificent Bell Tower was again complete. 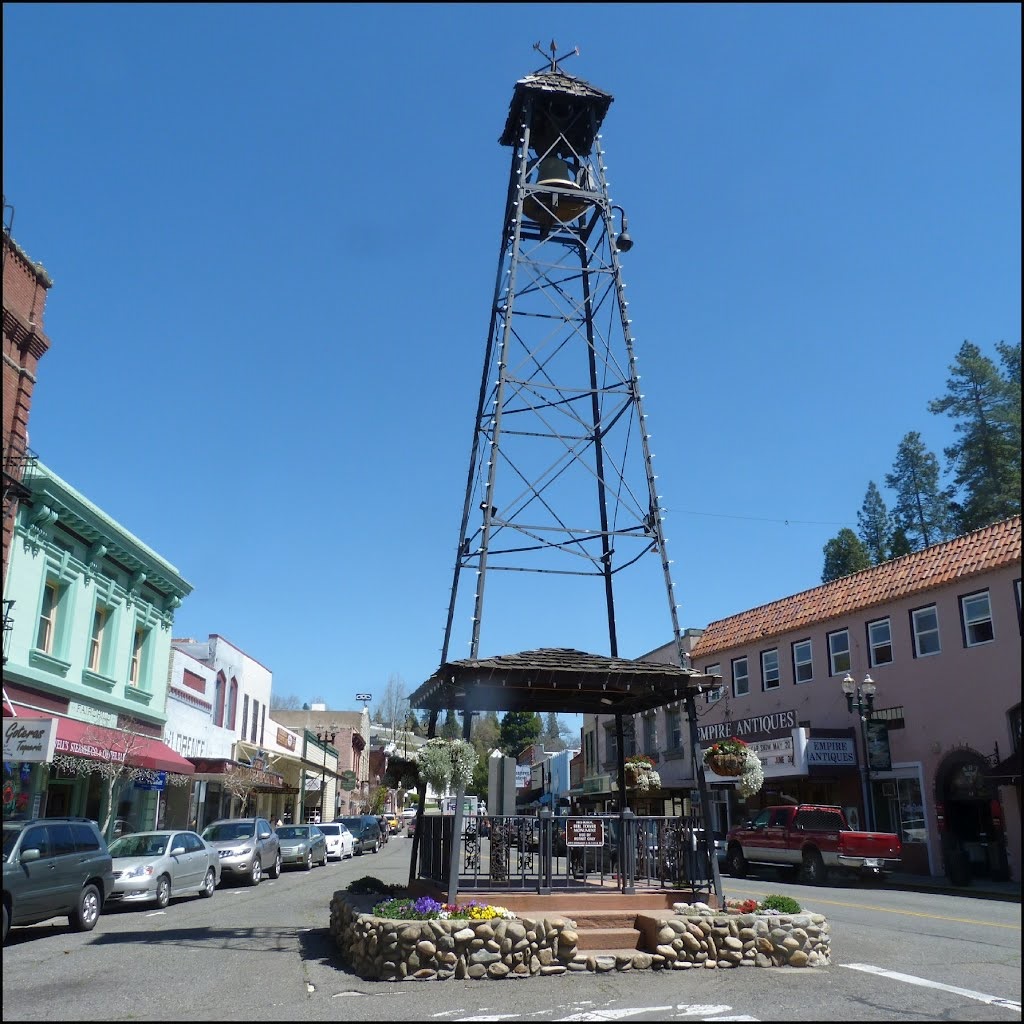 On September 8, 1998, our metal Bell Tower will be celebrating its 100th birthday – its centennial. In spite of being moved back and forth, damaged by cars, and several times a controversial subject, it has survived in its magnificence.

Let me be the first to wish you a happy 100th birthday, Bell Tower. May you not be forgotten on this wonderful occasion during this sesquicentennial celebration of our founding. May the citizens of Placerville all take the time to pause from their busy schedules and thank you for the hundreds, if not thousands, of times that you have called them to help each other in times of danger. May you forever stand magnificently in the City’s plaza.

Much of the information contained in this story came from the Heritage Association and a 1976 article by the late historian Claire Freeman. This article, along with numerous historical clippings, were graciously loaned to me by another Placerville historian, Marilyn Ferguson. Most of the photographs were courtesy of Steve Crandell, Hisorical Prints in Placerville.

← El Dorado County – Its Changing Boundaries
Where Did That Road Name Come From? P – Q →