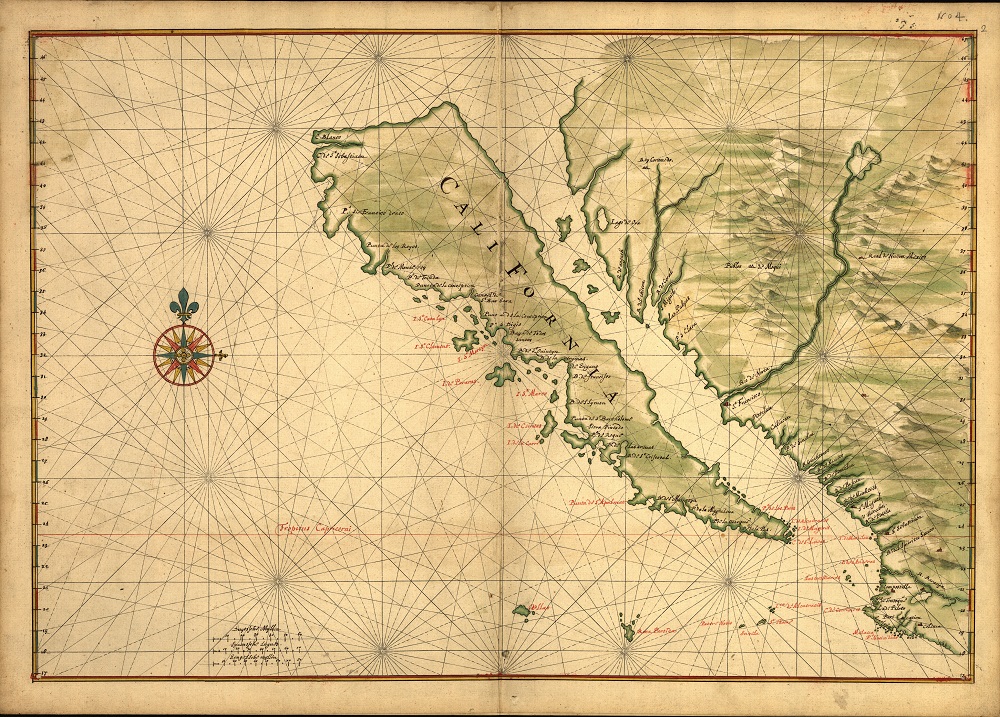 1650 map by Nicolas Sanson showing California as an island.

The names that are given to states, counties, communities and even the streets on which we live, come from many sources. Some have complicated mythical origins (with numerous variations), others reflect the location from which the first settlers came, while even others are given out as respect for a local citizen or famous person. In the State of California we find all of these.
The origin of the name California itself goes back many centuries to the early exploration of the New World. Then as now, people believed that just over the horizon were unexplored lands of untold wealth and beautiful people. As a result of this, in the Fifteenth Century, Garci Rodriguez de Montalvo, a Spanish writer, created an island called California lying on the right-hand side of the Indies and very close to the Garden of Eden.

As explorers returned to their ports, they told great tales of places such as California, pointing out that had they more ships and men they could have conquered the natives and brought back even more treasure in an attempt to encourage the financing of a new trip. Needless to say, the story about this mystical place grew way beyond the truth.

The Island of California itself, it was believed, was inhabited by a group of fierce, Amazon like and very beautiful black women. Their ruler was the most beautiful of them all, a queen named Calafia.

They were magnificent in their armor and weaponry of pure gold, the only metal found on the island.

They often sailed off in mighty ships to raid other lands, where they gathered treasure and captured men. Some men they kept, albeit temporarily, to insure that their race would not die out. Any male children born as a result of these unions were immediately killed as were most of the men they captured, other than the very few they felt they needed.

Although earlier maps of the New World showed California as a portion of a larger continent, in 1525 one Henry Briggs produced a map that included Queen Calafia’s land, depicting it as the Isle of California. Almost immediately there were new, more accurate maps disagreeing with Briggs’ work, but for a century or more other cartographers continued to copy his map. Myths are often more powerful than the truth.

It is sometimes said that the armor clad lady on the Seal of the Great State of California represents Queen Calafia. However, the lady is actually Minerva (Athena), the goddess of wisdom.

The name El Dorado, which was given to our County by the first California Legislature on February 18, 1850, also has its roots in myth.

Again it was the early explorers who brought back the tales of a place of untold riches – especially gold – in the tableland of Bogota.

This time the land was ruled by an Indian chief who, during special religious rites, had his body covered with oil and then rubbed with gold dust, thereby “gilding” him.

The search for this wondrous land of gold named El Dorado – “The Gilded One” – was the driving force behind many of the early explorations of northern South America, and later, Mexico. The story was so widely believed that in 1537 it was reported that the location of El Dorado had been found.

When gold was discovered in California, it was nothing more than a continuation of the search for “El Dorado” that brought the thousands of gold miners to that location.

The actual words “El Dorado” did not appear on a map of California until 1848 when the legend “El Dorado or Gold Region” was lettered along the Plumas River and the South Fork of the American River by Charles Preuss, the cartographer for the explorer John C. Fremont. Immediately the word became firmly attached to the gold bearing region of California.

There is a wonderful, flowery description of El Dorado County in the April 30, 1850 issue of the Alta California, a pioneer San Francisco newspaper. As a service to its readers, the newspaper published a list of the newly created twenty-seven California counties and the derivation their names. The derivations are believed to have been written by Mariano Guadalupe Vallejo, perhaps the most powerful man in Mexican California and a member of California’s first senate. The work was then translated into English for publication. It is apparent that Vallejo liked El Dorado County.

“EL DORADO – The far-famed fabulous region of genial clime and never-failing verdure, where gold and precious stones are as common as rocks and pebbles, where wines gently flow from fountains, where wheat spontaneously grows overtopped with tiny loaves of bread, and pigeons fly already roasted, where nature has converted the rudest things into harmony of shape and appearance and where, in fine, a creature of the genus malieris, full of symmetry and grace, trips about in natural loveliness the most beautiful of God’s creations. Francis Orreliana, a companion of Pizarro, first spread the account of the supposed existence of this province in South America.

“It is so universally known how and when the discovery was made that has caused the star of the west to spring up as if by magic, giving it the appropriate epithet of “golden” and will eventually revolutionize the world, that more than the passing remark that gold was discovered in this county as Sutter’s mill, is here deemed unnecessary. The county derives its name from this circumstance.”

Originally the State Legislature had considered naming the county Coloma, after the discovery site itself. Perhaps is was Vallejo’s words that caused them to change their minds and call it El Dorado.