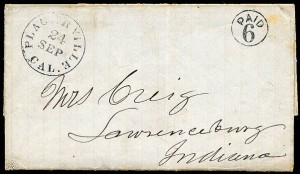 PLACERVILLE – This Gold Rush post office was established some time prior to Apr. 9, 1850, the date that the first postmaster, Thomas C. Nugent, was appointed by the Post Office Department in Washington, D.C.

The name comes from the gravel (placer) mining that took place in the area. The town was also known as the Ravine City, Old Dry Diggin’s and the infamous Hangtown, but no records show a post office by any of those names. The location of this post office is “officially” forty-four miles northeast of Sacramento.

The Placerville Post Office, although it has changed its location several times, is still in operation.

PLEASANT VALLEY – The Pleasant Valley Post Office was established on Mar. 23, 1864 with John B. Hass serving as the first postmaster.

The discovery of the area called Pleasant Valley is attributed to Henry W. Bigler who, on June 18, 1848 arrived in this area with two companies of the Mormon Battalion trying to find a new route to Salt Lake City, since the Truckee Route was impassable due to snow.

On Dec. 31, 1917, the post office was discontinued and the mail moved to Placerville

POLLOCK PINES – This post office was established on Apr. 28, 1936 with Mrs. Alice P. Grout serving as the first postmaster.

The name stems from an early land developer, Hiram Robert Pollock, who arrived here with his wife Anna and son Claude Earl, around 1909. A lumberman by trade, he borrowed money and built a saw mill. When the mill was destroyed by fire in the early 1930s Hiram and Anna Pollock started selling lots in a subdivision they created out of a piece of land that lay along the ridge, on both sides of Cedar Grove School. They called it Pollock Pines. The Pollock Pines Post Office is still in operation.

Pomins was a vacation resort located one and one-quarter miles south of McKinney (Placer County) and nine miles north of Emerald Bay. The post office was discontinued on Nov. 30, 1942 and the mail moved to Chambers Lodge (formerly McKinney) in Placer County.

QUINTETTE – The Quintette Post Office was established on Aug. 7, 1903 with Frederick H. Douglas serving as the first postmaster.

Located twelve miles to the east of Georgetown, on Wentworth Springs Road, Quintette it was named for John J. Quinn who had received the original land grant for this piece of forest land in 1889. Almost immediately he sold the land to the Barklage brothers who actually started the community of Quintette, which was supported by a logging camp and the Blue Bird Mine.

RANDALL – The post office at Randall was established on Mar. 27, 1917 at a site on the South Fork of the American River, seven miles east of Pacific (House). The first postmaster and operator of a resort at this location was Albert B. Randall, thus the name.

Service at the Randall Post Office was discontinued on Aug. 14, 1937 and the mail moved to Pacific. Randall’s resort was known as Whitehall, although there was no post office by that name.