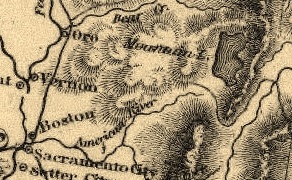 Because of its location in the remote and relatively inaccessible portion of the Sierra Nevada range, Lake Tahoe apparently escaped “discovery” by all but the local native population up until 1844.

It was on Valentine’s Day of that year that Captain John Charles Fremont and his party were near Carson Pass, atop Steven’s Peak or Red Mountain, on their exploration of the west. Looking north, Captain Fremont spotted a large lake which he named “Lake Bonpland,” after a fellow-explorer. However, the  topographer of the party, Charles Preuss, only noted it on his maps as “Mountain Lake.”

The lake would be known as Mountain Lake for several years and then Lake Bigler, after a California governor who, in 1852, led a rescue party to aid some stranded emigrants near the lake.

Naming it after a politician did not set well with some, so about 1861, when there was a strong movement to establish place name all through California, there was a movement to name the lake Tula Tulia, which some believed to be its real Indian name. Finally, in 1862, when all the dust settled, the name Tahoe (a Washoe Indian word meaning “big water”, “high water”, or “water in a high place”) prevailed (Mark Twain, in his book “Innocents Abroad,” disagrees with the meaning of the word Tahoe and contends it means “grasshopper soup”). It should have ended there, except in 1945 someone noticed that the proper procedure had not been followed in 1862 and the lake was still officially Lake Bigler. A quick act of the California legislature corrected that.

Direct exploration of the Lake may have taken place in the winter of 1844 by the Stevens-Townsend-Murphy emigrant party, a group that followed an old Indian trail over the mountains near the lake. This route would be substantially improved by John C. “Cockeye” Johnson, a rancher, Indian fighter and later a California State Assemblyman.

Johnson’s Cut-Off, as the road would be known, followed the general route of today’s highways 50 and 89, but took a more precipitous route, climbing directly from the valley to Echo Summit on a twenty-five percent grade road. In spite of the fact that there were places where the oxen had to be unhitched and the wagons hauled up the mountain by block and tackle, many parties of emigrants used this route, rather than follow the Carson Immigrant Trail to the south.

By 1855 the need to have a good road from Sacramento to the eastern border of California became very apparent and the California Wagon Road Act was passed by the legislature. Surveyors selected Johnson’s road and, in 1857, work on improving the road started, using monies provided by the counties, since the promised state appropriation had failed passage.

By the 1860s there had been many improvements to the road from Sacramento to Lake Tahoe. With the discovery of silver in the Virginia City area, this road became the most important freight route supplying the mines and, by 1869, it was considered the best highway in the country. Only a few years later, in 1896, this road became California’s first State Highway.

The first white settler in the Lake Tahoe basin was a Martin Smith, who arrived there in 1851. He was soon joined by a Vermonter, Asa Hershel Hawley, who arrived from Placerville in the spring of 1854, and homesteaded 160 acres four miles to the south of Smith, on which he built the Elkhorn House.

The miners in and around Virginia City needed wood to shore up the mines and to burn in the large steam engines that powered their equipment. The high desert of Nevada had only pinon pines and the Indians, because they needed the pine nuts for food, were able to get the trees protected by the U.S. Government.

The next nearest large supply of timber was at Lake Tahoe and soon the lumberjacks arrived in the Tahoe basin. The trees were cut, hauled by teams of oxen to the lake and assembled into large log “booms” which were towed by boat to Glenbrook. There the pine and fir were milled into lumber and the other trees cut into 42 inch lengths to fuel the giant steam engines. Everything was then carried out by train over Spooner summit to a point where it was loaded on a flume that carried it to Carson City. From there it was placed on cars and hauled to Virginia City. Needless to say in a short time nearly all of the timber in the Tahoe basin was gone and the lake was thick with leftover bark and branches.

Although the landscape was desolate, the fish in the lake are reported to have thrived because of the insects and other small creatures that washed from the thousands of logs hauled across the lake. The lake was fished commercially and its bounty graced the menus of many fine restaurants as far away as Reno and San Francisco.

As mining waned, and the need for timber was substantially reduced, the valley slowly began to repair itself and the lake slowly cleared. As the roads leading into and out of the valley were improved and the motorcar became commonplace, Lake Tahoe soon became not just a recreational area for the few able to afford the trip, but one accessible to everyone.

Much of the information for this story came from “Lake Valley’s Past”, compiled by Lorene Greuner, “Tales of Tahoe”, by David J. Stollery and “The saga of Lake Tahoe : a complete documentation of Lake Tahoe’s development over the last one hundred years,” by Edward Scott. All of these books and many more on this subject, are available at the El Dorado County libraries.