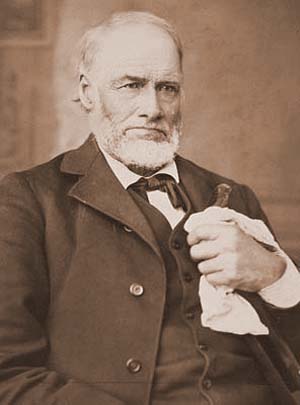 On top of a hill in Coloma, I’m told,
lies the grave of the man who discovered the gold.
James Marshall’s his name and his fame has spread wide,
although the attempted his secret to hide.

A sawmill he built by the river so wild,
and the great trees which stood, became lumber they piled.
The mill and the land were John Sutter’s to hold,
but he’s not the one who discovered the gold.

While checking the millrace Marshall bent and moved sand,
and picked up some flakes which he held in his hand.
To his workers he said, “I think a gold mine I’ve found,”
a secret they thought, but the word got around.

He packed a small can with the nuggets he got,
and took them to Sutter, to see what he thought.
The words that came back made him shiver like cold,
“It appears to me sir, you’ve discovered some gold.”

The word spread like fire throughout all the land,
it’s there for the taking, just reach out you hand.
And to John Sutter’s land, which he only had claimed,
they started to come the vast riches to gain.

From the east they first started and westward they went,
from the north, from the south, from the far orient.
Up the river they came miners brazen and bold,
to the place where the man had discovered the gold.

First by hundreds, then thousands up the river they came,
followed closely by more, each to stake out a claim.
By foot and by horseback and by wagon they sped,
“To Coloma!,” the cry, “It’s just straight ahead.”

It was littered with great ships, the Golden Gate bay,
as their crews left for riches, they all ran away.
They’d come ‘round the horn jammed from topdeck to hold,
bringing men towards the place he’d discovered the gold.

They divided the land, Sutter’s land don’t forget,
each man worked his claim the vast riches to get.
They moved the great river, it’s gravel laid bare,
to get at the gold, it was just lying there.

But soon their luck faded, fewer riches they took,
thus some of he brave ones went elsewhere to look.
So outward they spread, miners both young and old,
away from the place he’d discovered the gold.

But a few hearty souls took a long look around,
and saw there were riches not deep in the ground.
Like great stands of timber and fields to be plowed,
a land to be settled and of which to be proud.

So they planted he fields and the timber they cut,
where once there were tents, their houses sprung up.
Their families came west, as the wagon trains rolled,
to the land where the man had discovered the gold.

The merchants they prospered as more people moved there,
by railroad or wagon, o’er the Sierra with care.
They came west with purpose and talents in need,
to make blossom these towns, which were growing, indeed.

Some towns that they started great cities became,
as more and more settlers moved across the great plain.
They made California a land to behold,
it honors the man who discovered the gold.

On top of his grave, in Coloma, is set,
a statue of Marshall, so none will forget,
the man who came west, many years long ago,
and started the rush to the valley below.

His arm is outstretched and it points slightly down,
towards the river that winds through the center of town.
He seems to be saying, to all young and old,
“There!, that’s the place I discovered the gold.”