In El Dorado County there were, at one time or another, over 100 post offices with some 120 different names. Some had a short life and some apparently never even existed at all, although history books make reference to them. The latter were appropriately called phantom post offices. Many others, once established, continue to operate until this day. 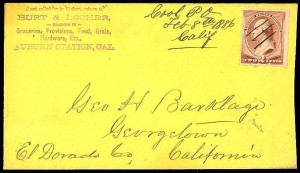 COOL: There are two schools of though about how this community in Cave Valley, six miles south of Auburn and at the northern intersection of Highways 49 and 193, received its name. Some say it was named for P. Y. Cool, an early miner, while others insist it simply was a reference to the weather.
The Cool Post Office was established on Oct. 20, 1885, with Henrietta Lewis serving as the first postmaster. It remains in operation to this day. 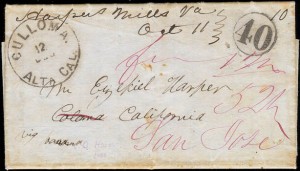 CULLOMA: This is the name first given the Coloma Post Office. The postmark included “Alta Cal” until statehood, and a short while afterwards. The name is derived from the name of a nearby Native American village. 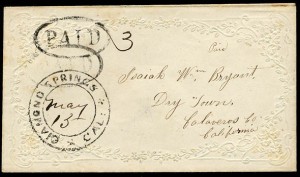 DIAMOND SPRING / DIAMOND SPRINGS: This early mining location is most likely named for the crystal clear spring at this important intersection of the Carson Immigrant Trail with the main north-south road through the Mother Lode (now Highway 49). However, some believe it was named for the diamond like, clear quartz crystals found there.
Four miles south of Placerville, the post office was established here on Oct. 17, 1853 with Chauncy N. Noteware as the first postmaster. Since the town was alternatively known as Diamond Spring and Diamond Springs over the years, on July 1, 1950, the Post Office Department officially changed the name to Diamond Springs, at least for post office purposes.
This post office has been in continuous operation since it was first opened and, during the short life of the Pony Express, served as a station for it. 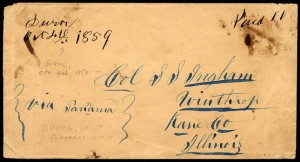 DUROC: This post office was originally known as El Dorado Ranch. The El Dorado Ranch post office was located half way between Mud Springs (El Dorado) and Clarksville, being eight miles from each on the main east-west immigrant road, according to the application filed in Washington, D.C., although the exact location is unknown (a “ghost” post office).
The proposed name for the post office established at this location on June 19, 1857 was Deer Creek, although El Dorado Ranch ended up being the actual name. Lyman A. Hoyt was the first postmaster and on Sept. 14, 1858 the name of the post office was changed to DuRoc, the name likely coming from the name of a French family in the area.
The first postmaster at the DuRoc (later Duroc and even later Durock) Post Office was Theron Foster. On Nov. 23, 1864, about same the time the railroad reached Shingle Springs and the traffic on the road decreased substantially, the post office closed. A portion of the old road still from Shingle Springs to Cameron Park still has the name Durock and there is a monument to the Pony Express  near the bend in the road where it turns into Cameron Park Drive . 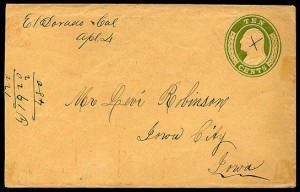 EL DORADO: This early post office was originally known as Mud Springs, a name given this location because the thousands of immigrants traveling along this part of the immigrant trail watered their stock here, muddying the spring and the surrounding land.
The Mud Springs Post Office was established prior to Nov. 6, 1851, the date it was approved in Washington, D.C. Darwin Chase was the first postmaster. On Dec. 15, 1855, the name of the post office was changed to El Dorado with George W. Critchfield serving as its first postmaster.
Named after the Spanish word for “The Gilded One”, because of the number of rich gold mines in the area, the El Dorado Post Office has continuously operated since it was first established.