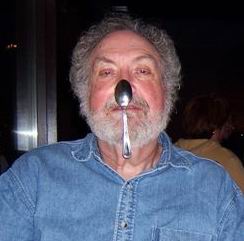 There are a number of places that I have written about and then later get the opportunity to try something new. Then there are places that have specials I want to try.

Rather than try to create a whole new article about them, I am going to group them together under the “Out and About” heading.

Some time ago I wrote about a unique local business called Farmer’s Delicatessen and its owner and very talented chef, Christine Ondrus-Lykos. She had given me several cooked and then frozen entrees to try: Lamb Meatballs in Red Wine Gravy, Ragu Bolognese and Csirke Paprikás (Hungarian Chicken Paprikash). They came with reheating instructions and preparation ideas and were fantastic. If you recall I ate the entire Ragu Bolognese in one sitting.

She has recently added a couple of new items, Lentil Soup and Rosemary Focaccia.

The Lentil Soup I tried with a dollop of sour cream and the next time added some sausage. Both ways it was wonderful. The taste was great and the vegetables in it were cooked just right. How she does it, I don’t know.

The Rosemary Focaccia? Well I have eaten a lot of focaccia made by a number of local bakers and hers is the best. I had a hard time saving some for later.

A lot of what she makes is gluten free and/or vegetarian. Ask her about that.

She sells her entrees and other goodies, including Greek Meatballs, Baklava and more at Folsom’s Sutter Street Farmer’s Market every Saturday through spring from 8 a.m. until 2 p.m., or you can order them by calling her at (530) 748-9165. Delivery is available.

JACK IN THE BOX

Russ Salazar and I tried the Blazin’ Chicken Sandwich at Jack in the Box. It was actually quite good and not that hot even though it had Ghost Pepper sauce and sliced jalapeños on it. Salazar liked it enough to go back a couple of days later to have another.

Since we had some coupons, we also tried a Jumbo Jack and a Monster Taco. The Jumbo Jack is a good deal if you have a coupon and the Monster Taco was about twice the size of their regular tacos. The taco filling was a mixture of beef and beans, which didn’t impress me, but Salazar really liked. He said that is the way it should be.

My son-in-law and I tried the Buffalo Blue Cheese Burger at Carl’s Jr. when I was in Sacramento. It was good, but I wish they could have taken more care when they made them. The sauce was all on one edge of the bun, the blue cheese was all on the other edge. This is one of the problems with fast food restaurants.

Locally I tried the Buffalo Blue Cheese Crisscut Fries and although they were good, I wasn’t terribly impressed. They could have been hotter, temperature wise, my usual problem with fries. (I send regular fries back about 90% of the time because they are not hot enough)

Russ Salazar and I dropped by the Subway on Broadway in Placerville to try three of their newer sandwiches: the Sriracha Chicken Melt, Sriracha Steak Melt and Jalapeno Turkey Melt (they were specials and may no longer be on the menu).

We added Provolone cheese to all of them (Pepper Jack might have been better) and to the turkey melt, chipotle sauce. We also added a few vegetables, but not enough to cover the taste. They were a bit dry, so we should have also added some mayonnaise.

The sriracha sauced sandwiches were very good, but not very hot (spicy). We both really liked the jalapeno turkey sandwich because it brought a nice warmth to your tongue, but wasn’t too hot. The chipotle sauce helped.

The nice lady who runs the restaurant told us that they are always happy to provide more sauce in a small cup if we want to add some to suit our taste.

A week later I went to the Subway on Fair Lane in Placerville and ordered a Sriracha Steak Melt. The lady fixing my sandwich added pepper jack cheese and a lot more sriracha sauce. It was really good and quite spicy. I guess it matters who makes it and where you get it.

Since we no longer have a Burger King around here (a long story), I stopped by one in Sacramento to try their new “Satisfries” which they claim have 40% less fat and 30% fewer calories.

I told the nice lady at the counter that I wanted to try them and she said that if I didn’t like them, they would replace them with something else. She said some people just don’t like them, adding “They are kind of like school cafeteria fries.”

Since it was around lunch I added a value drink (smaller than small) and from the $1 menu, their new BBQ Rib Sandwich.

The fries were crispy on the outside and soft on the inside, but a bit bland with a hint of something like baking soda. They were okay (pepper and ketchup helped). I think if I really wanted to save on fat and calories I would just eat the regular fries less often.

The BBQ Rib Sandwich was something else. A small piece of overcooked meat of some kind on a bun with barbecue sauce, two pickles and one ring of onion. I sent the first one back because it was burned and dry. The second one was better.

It looks nothing like the picture, but then it only cost a dollar.