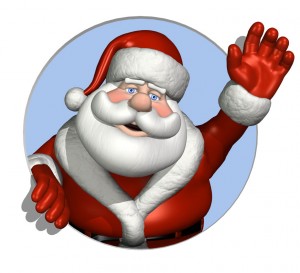 Hi there again. So you want to know more about the man in the red suit this year. Well, I’ll call Cal Worthington and ask him (just kidding – HO, HO, HO).

Last year Santa told you about some interesting things that happened to him during all the years he has been delivering presents and now you would like to know if Santa has ever met a famous person on Christmas Eve. Added to that, you also want to know what Santa does the other 364 days of the year when he is not delivering presents. I don’t know, that is a lot of information and Santa is busy. But, I guess I can take the time to tell you a little bit more. First Santa will tell you what he does after Christmas.

For a few weeks after Christmas, Santa and the elves work on designing the next year’s toys and making sure that all the equipment in the toy factory is working perfectly. But first the elves have to fix any toys that Santa broke during his Christmas Eve deliveries. Like Santa, the reindeer seem to be getting spryer each year and like to make loops when Santa wants they to fly straight. Each time they do some fancy flying a few toys get broken, but if Santa and his helper elves didn’t always fasten their seat belts and tie the load of toys down real good, there would be toys, elves and Santa all over everywhere.

Santa thinks it is Blitzen who is causing all the problems. The elves tell me he wants to be called Fred instead. Somehow “On Dasher, Dancer, Prancer and Vixen, Comet, Cupid, Donder and Fred” isn’t real poetic. Oh well, we’ll see.

So, with all the chores done it is time for Santa, and Mrs. Claus, to head south for a bit of sunshine. No, we don’t take the sleigh and the reindeer, they can only fly on Christmas Eve. So, we drive over to the airport and fly out, like everyone else.

I am sure you are wondering why the other people on the airplane don’t recognize Santa. Well, as I told you last year, Santa himself is a “jolly old elf” who can change his size (how else would Santa get down a small chimney). But, without the Santa Suit and with the beard trimmed and maybe colored a bit, Santa looks just like a normal person who likes to eat.

Both Santa and Mrs. Claus love spending some time on the beach right after Christmas. We have to go somewhere where it is warm in January, like South America or Australia, but it is worth the trip.

Of course, Santa always takes along a lot of sunblock so that he doesn’t get sunburned (I know, then I wouldn’t need a red suit – HO, HO, HO). A sunburn always ruins a vacation, don’t you think?. But, before going to the beach,  Santa has to take care of the wind burn he gets from flying around the world in his sleigh.

Some of Santa’s elves think he should wear a ski mask to keep the wind from drying out his skin, but if you came down the stairs on Christmas Eve and saw a man in a ski mask, you might think it was a robber and call the police. Then Santa would end up in jail.

No, Santa will endure the wind on his face rather than miss Christmas. After all, that is what gives him the red cheeks and red nose that he always has in pictures (Mrs. Claus thinks that makes me cute). Besides, when he is on vacation, Santa gets to have a facial to take care of the dry skin and Santa loves to be pampered.

After some time on the beach, Santa heads back to the North Pole to check on the elves and see how things are going. Then, in the early summer, Santa plants a garden so that he and Mrs. Claus can have fresh vegetables  (Santa has a greenhouse at the North Pole so the plants don’t freeze). With that done, Santa and Mrs. Claus usually head out to visit a fair or a theme park.

Did you know that a few years ago, Santa actually visited several county fairs?

Mrs. Claus really loved the quilts and spent quite a bit of time looking at them and other handmade goods. Santa sneaked away and rode on the Tilt-a-Whirl. Santa loves carnival rides, and also ate his fill of tacos, hamburgers, corn dogs and cotton candy.

Santa didn’t try any of the carnival games, because someone who can go up a chimney with a “nod and a wink” can easily knock over milk bottles without throwing the balls and that wouldn’t be fair. Besides, Santa has a factory full of stuffed animals and Mrs. Claus would probably be very unhappy if he brought more home.

Well, from mid-summer on Santa has to start getting ready for Christmas Eve. In fact that is why Santa is so busy right now. There are lots of things to do, but I think Santa has just enough time to tell you one story about a Christmas Eve many years ago when Santa met someone famous.

If Santa recalls correctly, it was in London, England on Christmas Eve 1842. Hurrying from house to house as Father Christmas  and covered with soot from the coal fires that the Londoners used to keep warm, Santa happened into the home of the Dickens family.

Leaving the presents, Santa was about to depart when he spied a candle burning on a desk in the corner of the room. Now, unattended fire of any kind is bad, so Santa carefully tiptoed over to put the candle out. As Santa got close he saw a man with his head on the desk. He seemed to be sleeping so Santa tried not to wake him, but he tripped over a toy left lying on the floor and made quite a crash.

The man awoke with a start and Santa froze, hoping not to be seen. It was Mr. Dickens himself, who was working on a new story. He looked at Santa and said, “Father Christmas, you are probably the only one who can help me. I am writing a story about a man who hated Christmas and I am stuck.

“How do I convince someone to believe in Christmas and all the joy it brings to everyone, especially since Christmas seems to be losing its meaning to everyone?”  “Well,” Santa said, “since I am a few minutes ahead of schedule,  maybe I can help you.”

Mr. Dickens was delighted and he told Santa all about “A Christmas Carol” his new story with Ebenezer Scrooge, Bob Cratchit and Tiny Tim. Mr. Dickens and Santa talked about all kinds of ways to make people believe in Christmas, but it was Dickens who came up with the idea of Scrooge being shown Christmas past, present and future to make him believe.

The next year, what did Santa find when he visited the Dickens’ house but a copy of Dickens’ new book set beside some cookies and milk. Santa loves presents too.

Speaking of cookies and milk, as Santa said last year, he gets lots and lots of treats left for him by the children and he loves all of them. And, sometimes children even leave something for the reindeer, like dog biscuits, carrots or maybe some oats, and, believe me, they appreciate it.

However, if you get up on Christmas morning and find that Santa or the reindeer did not take what you left, don’t feel bad. Santa cannot eat all of the cookies and things that are left, and often just grabs one now and then. The same goes for the reindeer or the elves that often accompany Santa. But, that doesn’t mean you shouldn’t stop leaving them. Whether or not Santa or the reindeer eat what you have left for them, he still feels the love that left them there.

Whoops, there is a problem with the toy train assembly line, the freight cars are smoking and the engines are all running backward. So I have to finish now and go make sure that all of the toys are ready on Christmas Eve. But, I am glad that I was able to answer you questions and share some of my memories with you.

Remember, love each other, take care of each other and be good. Oh, also remember its soft chocolate chip cookies and milk that Santa likes.

Have a Merry Christmas……