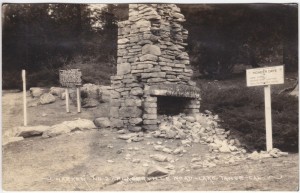 In the early days of California, there were more than forty stations or travelers stops located along the portion of what would ultimately become Highway 50 between Placerville and Echo Summit. Some were large structures and some as small as one roadhouse, toll house, blacksmith shop or simply a cabin or shack with meals and a room to rent.

Many of these were originally established to provide badly needed supplies and services to the exhausted emigrants arriving in California during the early years of the Gold Rush.

Even more were added a few years later when the road became crowded with the endless line of coaches and wagons hauling freight and passengers over the summit to the mines at Virginia City. In fact, it is reported that within days of the discovery of silver in Nevada, there was a shack, tent or bench at every wide place in the road, from which people were selling all kinds of goods.

Over the years most of these places, and even their locations, have disappeared from maps and memories, leaving only a few with names like Fresh Pond, Pacific House, Whitehall, Kyburz, Strawberry and Phillips.

To understand the history behind the rapid appearance and disappearance of these stations along this historic road, one must first take the time to look at the complex history of the road itself. A road which, in a relatively short period of time, went from being not much more than a trail to the major highway it is today, connecting Sacramento to the southern end of Lake Tahoe and points east.

Who knows who first established and traveled this route. The local Indians were well known to have migrated east and west with the seasons and likely made the first passable trail along an existing animal migration route. However, this way across the Sierra Nevada would not become well known until a new connection between Mormon Station (Genoa, Nevada) and Placerville was pioneered through portions of the American River Canyon by John Calhoun (Jack or “Cock-eyed”) Johnson in 1848 (some argue 1852).

Johnson reportedly made several trips carrying the mail between these two towns and in looking for a shorter route, established what was then not much more than a walking trail, which just happened to pass by his ranch, where he sold provisions and feed for livestock. Within a short time the first of some 300,000 emigrants would use this route to enter California and the trail would rapidly become a road.

This road, appropriately called Johnson’s Cut-off, followed the old highway from Placerville to just east of Pacific House. From here it crossed the South Fork of the American River on a bridge built by one William Bartlett (possibly with Johnson’s money) and then climbed upward to Peavine Ridge. It then followed the ridge to a point on Wright’s Lake road, just south of the Lyons Creek crossing, where the Georgetown road turned off towards Onion (Union) Valley.

From there the road followed old Highway 50 to what was originally called Johnson’s Summit, but has been relocated and is now known as Echo Summit. From there it dropped down the steep grade into Lake Valley and then over Spooner’s Summit, and down Kings Canyon to Carson City. The route was rough and difficult so, almost immediately it was modified by others to make it more usable.

On May 1, 1851 mail contractors Major George Charpenning (Chorpenning?) and Absalom Woodward left Placerville with the “Jackass Post” following Johnson’s Cut-off. Upon reaching Lake Valley they turned south over what was later known as Luther Pass (Highway 89) into Hope Valley and then east to Mormon Station.

Around 1855 the Bartlett Bridge washed out and was replaced by a new bridge a little further east, downstream of Riverton. Anthony Richard Brockliss (Brockless?), who built this new bridge, then constructed a road parallel to and below Johnson’s Cut-off, to Silver Fork. His new toll road – Brockliss Grade – replaced a difficult portion of Johnson’s Cut-off along Peavine Ridge.

Six years later, a gentleman named Ogilsby would create his own bypass of Johnson’s Cut-off and Brockless Grade, by building a new toll road – Ogilsby Grade – from the east end of what is now Pollock Pines to Whitehall.

Sources for this story include: “History of California”, by Theodore Hittell (1897); “California Gold Camps”, by Erwin Gudde (1975); “California Place Names”, by Erwin Gudde, 3rd Edition (1974); “The Wrights Lake Story” by the Historical Committee of the Wrights Lake Summer Home Association (revised 1994); “The Saga of Lake Tahoe”, Volumes I & II, by E. B. Scott (1973); “History of California Post Offices, 1849-1976”, researched by H. E. Salley (1976); “Mother Lode of Learning – One Room Schools of El Dorado County” by the Retired Teachers Association of El Dorado County (1990); “I Remember…, Stories and pictures of El Dorado County pioneer families”, researched and written by Betty Yohalem (1977); “History of El Dorado County”, by Paolo Sioli (1883), reprinted and indexed by the El Dorado Friends of the Library (1998); and the archives of the Mountain Democrat (1854-Present).