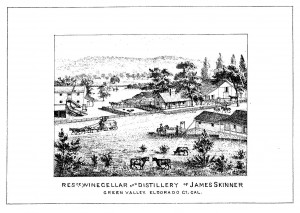 Just to the east of the New York House was the beginning of the Hopkin’s Toll Road, which was a mile and a quarter long and better maintained than the county road. Along it, on the north side of the road was a log cabin in which a Mrs. Powell kept a roadside hotel. It is close to where the Live Oak Schoolhouse was later built. Just to the east of it, on the south side of the road was large two-story frame building knows as the Wakasha or Walkershaw House.

Mr. and Mrs. Joseph Taylor, the aunt and uncle of Austin Taylor Leachman (Leachman House), operated the Wakasha House, which was one of the main stops for travelers going to the Mother Lode. It, like many early hotels in the Mother Lode, was built and assembled on the east coast, disassembled and shipped around the Horn to California. It was the Taylors who offered a job to young Mary Sullivan, who soon thereafter, met Austin and married him.

The origin of the name is unknown, but some say it strangely commemorates the Paiute chief called Walker-aw, who misdirected a group of the Bennett-Arcane party (also known as the Sand Walking Company or Jayhawkers) through Death Valley to the gold fields. The Jayhawkers ended up a few miles to the east, near Rescue.

About a mile further along the trail, on the eastern edge of Green Valley was the Green Springs House.

Located on the south side of the road, the Green Springs House was built by Rufus Hitchcock, who had been connected with the Sutter’s Fort Hotel. He would run the place until 1851, when he died from smallpox. It was then purchased by William Dormody, who ran it until he died in 1876. His widow, Sarah F. Dormody then took over what would become a favorite location for wedding parties.

About a half-mile east was the Pleasant Grove House. Standing on the north side of the road, it became, in 1860, the first Pony Express remount station east of Folsom and a place where their horses were re-shod.

In 1864 William Wallace Rust purchased it from Ira Rounds Sanders. Later it was managed by his son-in-law, John Fleming and John’s wife, Louisa Rust Fleming.

Although the hotel is gone, much of the Pleasant Grove Ranch buildings still stand on the property, a site commemorated by a monument placed there in 1937 by the Placerville Parlors of the Native Sons and Daughters of the Golden West.

Just one-half mile to the east of the Pleasant Grove House was a store and stopping place built by Frederick Rohlfing. This important stop was south of the main road and east of an old crossroad that led south to Bass Lake, Clarksville and the Mormon Tavern (old Highway 50).

One mile further east is the Green Valley House, owned by Frederick Engesser, an emigrant from Germany. In 1868 he built the two story frame building on the south side of the road (between what is now Cameron Park Drive and Cambridge) and it soon became a very popular stop for travelers.

The Engesser family owned Green Valley Ranch for many years and the building was only torn down a few years ago, after being offered to various preservation organizations for relocation. When a shopping center was built on this and adjacent properties, a number of grape vines, fig trees and pioneer roses, one with two eleven inch “trunks,” were destroyed.

The Green Valley House is mentioned as having had a post office, which was later moved to Rescue. The record on this is confusing because the major book on post offices (“History of California Post Offices, 1849-1976”, researched by H. E. Salley (1976)) says Green Valley was on the road between today’s Rescue and Lotus.

A short distance to the east, on both sides of the road (adjacent to and east of Cameron Park Drive) was the Skinner Winery, one of the first in El Dorado County.

It was built by James Skinner, a weaver and carpenter who emigrated from Scotland in 1842, taking employment in the manufacturing of silk. In 1852 he emigrated to California, planting a large vineyard in 1860-61. Mr. Skinner engaged in the manufacture of wines, brandy and vinegar at this location, building a large, two story distillery and an wine cellar capable of storing 15,000 gallons.

The wine cellar is now the location of a nursery, the winery having been torn down several years ago, only a portion of which has been rebuilt as a “monument” on the southeast corner of the two roads.

A major source for this article is a book called “The Early Inns of California 1844-1869,” by Ralph Herbert Cross. Copies can be found in the rare book section of the El Dorado County main library.