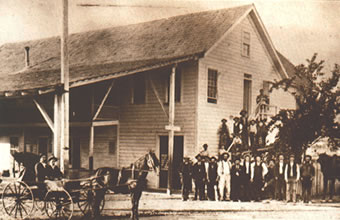 Located just three miles east of downtown Placerville, the town known at various times as Smith’s Flat, Smith Flat and Smithflat, was not only an important stop along the Placerville wagon and stage road, but also a mining town of some renown. It is believed to have been named after a pioneer farmer or rancher named Jeb Smith, who was the first person to settle there, although there is little evidence to support that belief.

The first hint of the richness of the diggings in the area of Smith Flat occurred in 1849 when a miner, while searching for new diggings, leaned over and picked up a nugget or two. Hearing of this new find, flocks of miners rushed to the area rapidly staking out their claims.

Since this led to conflicts between miners, mining laws were soon drawn up for what had become the Smith’s Flat mining district.

These laws specified the size of the claims, the number of claims one miner could hold (two, one by location and one by purchase or two by purchase), and provided numerous rules on staking, recording and working claims. To reduce the possibility of fights among the miners, the mining laws even outlined the means by which a jury of miners would be selected to settle any difficulties.

As was usual in these mining camps, for the first few months or so the gold was easy to find, and many miners “struck it rich.” However, soon these surface deposits were depleted and most miners left for new diggings, with a few staying to form partnerships. These partnerships, or “companies” as they were more commonly known, provided the manpower needed to start serious exploration into the ground.

Soon they discovered that much of the area was underlain by an ancient (Tertiary) riverbed – rich in gold.

One such deposit known as the Deep Blue Lead, a major tributary of the ancient American River, was traced from White Rock Canyon, south through Smith’s Flat and then further southwest to Cedar Ravine.

From 1888-96 and 1916-19, one Smith’s Flat mine, the Rogers Gravel Mine (later called the Benfeldt Mine), was very active, having been developed by a 750 foot inclined shaft with drifts. The cemented gravel was brought to the surface and put through a ten-stamp mill and then a one hundred and fifty foot sluice. Once the gold was removed, the remaining gravel was lifted by a forty-four foot diameter tailings wheel and piled off to the side.

These ancient river deposits, consisting of the Blue Lead and Gray Lead channels, would continue to be mined up through the 1930s, if not later, at several locations in the area. These locations included the Hook-and-Ladder (Toll House Mine), Carpender and Kumfa (Kum Fa) mines, among others.

Being on the Placerville wagon and stage road, Smith’s Flat was the perfect location for a hotel and toll station (the road being privately owned and maintained until taken over by the County of El Dorado in 1886 and later the State).

At this location, in 1853, was built the Three Mile House, now known as the Smith Flat House, probably the best preserved frame building of its size in the Mother Lode (unfortunately, the nearby toll house building was razed by the State, when U.S. 50 was realigned).

Built over the entrance of the Blue Lead Mine, the Smith Flat House originally consisted of a general store, post office, bedroom, dining room and dance floor, all downstairs, with more bedrooms above. There was also a barn that could stable 40 horses for the many teamsters and travelers that passed this way.

Just as the number of California emigrants passing through Smith’s Flat began to decrease, silver was discovered near Virginia City in Nevada. Immediately the traffic reversed and the road became the most crowded road in the state as thousands of freight wagons carrying supplies and equipment passed by on their way over the Sierra Nevada to the mines.

Because of this traffic, in 1863 a blacksmith’s shop was added next to the Smith Flat House, followed in the 1890s by additional improvements to the building including a kitchen, pantry, laundry, more bedrooms and a saloon and cardroom.

Over the years, the Smith Flat House has had many owners and many uses. It became the community center in which a post office was established on January 31, 1876, with George B. Raffetto serving as the first Postmaster. On September 7, 1895, the Post Office would change the name of Smith’s Flat to one word, Smithflat, to avoid confusion with several other “Smith” towns in California.

Because early postmasters were politically appointees, the Post Office probably moved around a bit with the party changes in Washington D.C. However, it ended up spending most of its last years in the Smith Flat House.

First organized April 8, 1858, the Smith’s Flat School continued to serve the local students until July 1, 1951, when it was consolidated with the Placerville Elementary School to become Placerville Union School District.

When the new Highway 50 was built in the 1960s, Smith Flat Road was no longer part the main road to South Lake Tahoe and traffic along it nearly ceased. Thus, there was no longer a real need for a hotel, or for that matter most other businesses, in Smith’s Flat.

Many buildings fell into disrepair and some were abandoned. The Smith Flat House, with its basement saloon, became a restaurant under a series of operators until it closed for several years. Recently it has been completely renovated and now includes a center for health, along with dining and live entertainment, events and catering.

For a while the City of Placerville considered the annexation of Smith’s Flat into its incorporated boundary.

What the future will bring for Smith’s Flat, no one knows for sure. But, the town and the Smith Flat House have a history of surviving and should continue to do so.