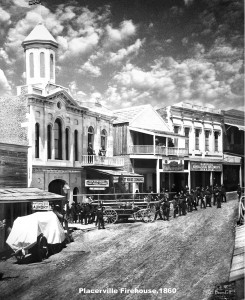 On September 9, 1850, California officially became a State. Feeling that Hangtown was an inappropriate name for a community, the legislature pondered naming it either Ravine City or Placerville, with the latter winning out. As a result of the change in the status of California, things began to settle down and become more organized in the town of Placerville.

Everyone knew that with statehood, immigration would increase. With more people the possibility of fire would increase substantially, and fire was the scourge of the mining communities.

The early buildings were all built of wood and canvas; wood was the only source of heat and oil lamps provided all of the light. In a crowded town like Placerville, fire was everywhere, waiting to spread and the citizens were concerned.

Prior to 1853 fires were fought by whoever was around, using whatever they had handy. Obviously it was a poor system, especially if a fire started to spread.

On June 23, 1853, a group of the town’s young men met at White’s Hall, and set out to form a volunteer fire department to protect life and property from the ravages of fire. The group soon organized the Neptune Hose Company No. 1., and adopted the motto: “We’re ready!”

The next order of business was to have a carriage built and purchase fire hose. A Mr. Alfred Bell generously advanced the necessary funds for the equipment, a debt that was paid back by a benefit performance of the Lee & Marshal Pioneer Circus, which raised some $900 for the group.

The first home for this fledgling company was on Maiden Lane (later Centre Street and now Stagecoach Alley), but it was not a good location.

Later, when the town was incorporated, the company applied for and obtained an appropriation to purchase a house and lot on Main Street. Unfortunately, the great fire of July 6, 1856 destroyed the building, along with all of their hose, furniture and fixtures. To make matters worse, the Town Council, a few days after the fire, sold the now empty lot to a Mr. Dorsey. For a year the Neptune Company had no home for their carriage and considered disbandment.

Fortunately, by 1858 they were able to raise enough money by subscription to purchase a home on Coloma Street, change their name to Neptune Engine Co. No. 2, and order a new fire engine from Hunneman & Co. in Boston.

Just prior to that, on April 13, 1857, another engine company was organize under the name of the “Mountaineer Engine Co. No. 1.” They soon purchased an engine and 250 feet of hose from Engine Co. No. 1 of Sacramento. When the equipment arrived, they found that Confidence Engine Company No. 1 was so deeply carved into the side of the engine that it would be impossible to remove it. Being people who knew how to solve problems rapidly, they simply changed the name of their company to match that on the engine.

After 12 years Confidence Engine Company No. 1. was forced to cease operations. They had received little financial support from the City and were deeply in debt. The citizens would not allow this to happen and gave a festival which raised $396.35. This, and generous subscriptions saved the company. The word “Confidence” is still on the front of the City Hall, a reminder of the days when they were headquarters in that building.

On April 24, 1857, “An Act to incorporate the Town of Placerville” was amended to give the Council the powers to “levy and collect taxes…regulate tippling houses, dram shops, gaming and gaming houses…disorderly houses of all kinds including houses of ill-fame…”, among other things.

On March 7, 1859, the original incorporation was repealed and “An Act to incorporate the City of Placerville was adopted and approved by the State. The description of the land to be included in the city reads as follows:

“All that tract of land, in the County of El Dorado, lying within the boundaries and limits hereinafter mentioned – that is to say: Commencing at a large pine tree west of Frederick A. Bee’s private dwelling, north sixty-five degrees east to another pine tree on the east bank of a ravine, distance two hundred and twenty-four rods; thence south thirty-four degrees east to a large pine stump, distance one hundred and twenty rods; thence south thirty-five degrees west to a tunnel on Coon Hollow and Hangtown Hill, distance two hundred and eight rods; thence north forty-four degrees west, distance town hundred and thirty-six rods, to the place of beginning, is hereby declared to be a City, and shall hereafter be known by the name of the City of Placerville.”

There were few significant changes in the government of the City of Placerville until the early 1870′s. It was at that point that the City, with little money in its coffers, lost a lawsuit filed by the bondholders of the Placerville & Sacramento Valley Railroad. As a result, the City government effectively closed down for a quarter of a century.