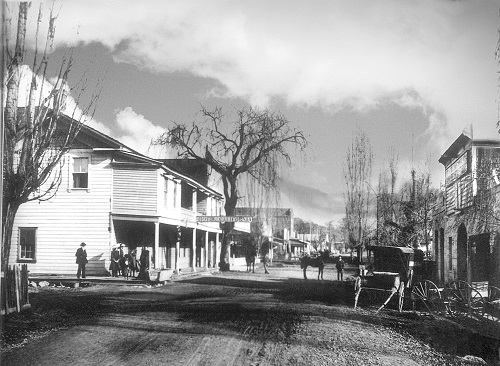 Before we leave Forty Mile House, just west of Frenchtown Road, we should note that the original 1848 – 1849 Carson Emigrant Road passed a hundred and fifty feet or so south of the existing Mother Lode Drive (old Highway 50).

About one-hundred yards west of where the original road crossed the Latrobe road (now  Frenchtown Road), was located a small grave of a young girl who died here after a long overland journey across the plains and mountains to California and only forty miles from Sutter’s Fort. Unfortunately, the wooden fence and marker that her grieving parents erected at her final resting place were destroyed by a brush fire many years ago.

About a half mile east of the Forty Mile House was the Mountain House, which stood at Greenstone (Road?), the intersection the main road and the road to Latrobe.

This roadhouse marked the eastern end of Johnson’s or Davidson’s toll road, which was several hundred feet north of the present Mother Lode Drive. There is some indication that Mr. Davidson may have run this roadhouse, but that is all that is known about it.

Three quarters of a mile further east was the Kingsville House, at a place known also as Kingvale or Kingville (across from Taeger’s Firewood just east of Summit View Subdivision).

In 1853, the proprietors of this roadhouse claimed they were “erecting the largest building in the state”, a statement that seems to have little factual information to support it.

In 1862 another proprietor, Withers King, prepared an advertisement for the newspapers offering it and the ranch, consisting of about 600 acres, for sale. He also offered for sale the nearby Slate Creek House and 50 acres, about which little is known.

A short distance further the road turned to the northeast and, after nearly a mile, reached the Lone Tree House, built by Young Gray in 1852. This roadhouse stood at the intersection of the main road and a road that branched off towards Placerville (El Dorado “Y”?).

Some three-quarters of a mile along the main road (now Pleasant Valley Road) to the southeast was a house built by James Askew in 1861. This house, on the south side of the road, became the headquarters for his stock ranch and dairy farm and later, was run as a roadhouse by Jeremiah Nichols.

A few hundred feet later, the road enters the townsite of El Dorado, once known as Mud Springs because the immigrant’s road weary animals muddied the spring water while attempting to slake their thirst.

The first stop in this early mining town was the (Old) Mud Springs House, built as a trading post and hotel for the immigrants by James Thomas in the winter of 1849. Thomas’s three buildings, five log cabins, stables and two large corrals would be the cornerstone for this town which, by 1851, was home to some 500 miners. Later hostelries included the Nevada House, which stood on the south side of the road at the eastern end of the town.

A popular gathering place, the “ball of the season” on the 4th of July in 1855 was held there. It is said that the event was so large that at least one hundred and ten ladies attended, a very large number in a time when the population was substantially male. It is believed that in 1860, the Nevada House became an early remount station for the Pony Express.

By 1862, O. B. Wescott and Richard Atmore managed the place as a stop where stagecoaches traveling from Nevada to Folsom, changed horses. In 1870, it was under the management of an Irishman named Dennis Higgins.

Another establishment in Mud Springs was the Oriental Hotel, a two-story frame house constructed about 1852. Over the next two decades the place had several proprietors: Charles Boyd, an Englishman named William Henry Pavey, Mr. and Mrs. Harvey and W. H. Pallet.

Pallet’s widow married a Richard Pitzer, changing the name to the California House. Then it became the Hill Hotel and finally Mr. Hill’s private residence.

While under the management of the Harveys, it was intentionally set fire to by a local doctor, Dr. Schultz.

The elderly Dr. Shultz had been the only doctor in the town until a much younger doctor, named Dr. Proctor, opened his business in the Oriental Hotel, thereby taking most of Dr. Schultz’s patients. Dr. Schultz attempted to solve the problem by lighting the hotel on fire, hoping it would wipe out the competing doctor’s business and the doctor himself. The fire was rapidly extinguished and, needless to say, Dr. Proctor survived.

Dr. Schultz was tried by a jury and ended up in San Quentin for his arsonous act.

The last place of note in the townsite of Mud Springs was the Temperance House, which existed during the heyday of mining. It’s claim to fame is a marriage which took place there on November 19, 1854.

After knowing each other for only one hour, Judge E. Ballenger, of Buckeye Flat, and Mrs. Zerelda E. Deering, of Diamond Springs, ceremoniously became man and wife. The newlyweds together, it is said, totaled five hundred pounds in weight and ninety years in age.

Note: A major source for this article is a book called “The Early Inns of California 1844-1869”, by Ralph Herbert Cross. Copies can be found in the rare book section of the El Dorado County main library.