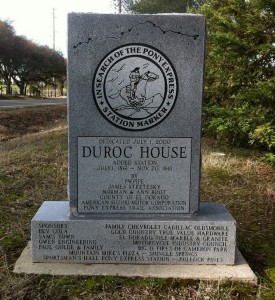 Up the hill towards Placerville and to the east of the Margaret Tong’s Railroad House at Clarksville, was Samuel Freeman’s place and the Atlantic House. Nothing is known about these two stops other than the fact that they were at the junction with a road heading north which passed by Bass Lake, a reservoir for the Diamond Ridge Water Company. This road, which has its northern termination at Green Valley Road, would become today’s Bass Lake Road.

About a mile and a half east of the Atlantic House was the Ohio House (a fairly common name for hotels and inns), located on the north side of the road just west of Deer Creek (just east of today’s Cambridge Road).

In 1858, Sebastian Zimmerman purchased this land, which had on it only a log cabin built in 1849. There he erected several buildings including the hotel. Until the railroad reached Shingle Springs in 1865, the Ohio House was a very important overnight stop for teamsters.

About a mile further to the east was another one of the inns about which little is known, Daniel Hate Holdridge’s Deer Creek Hotel. Strangely, only a half mile further was a place much is know about, the DuRoc House.

The earliest record owners of this inn that stood at the top of a hill on the south side of the road, were Lewis and Sarah Ann Holdridge. They owned it in 1857 and 1858, and sold “the DuRoc house and ranch” to E. S. and Maria Hanshett. Later it was acquired by Theron and Mary Foster, Foster at one time being a member of the California Assembly.

On November 20, 1860, Frederick Gustavus Crawford, a teamster who was a frequent visitor to the DuRoc House, married Theron and Mary’s daughter, Mary Lanette Foster. In 1867 he joined Theron in operating the inn.

After helping Theron plant a vineyard, Crawford would move to Davisville and then Willows, where he and Mary Lanette built and ran hotels. One of these hotels, the Crawford House in Willows, was rated by some as one of the best appointed hotels in northern California.

On June 19, 1857, a post office was established at a location known as El Dorado Ranch with Lyman A. Hoyt as the postmaster. The name for the post office had been originally proposed to be Deer Creek, but the Post Office Department selected El Dorado Ranch instead.

On September 14, 1858, they changed the name of the post office to Duroc and appointed Theron Foster as postmaster. The post office would be discontinued on November 23, 1864.

The name Durock, a phonetic spelling of DuRoc, remains on a portion of the original Carson – Emigrant Road, which was Highway 50 before the present freeway was built.

A little more than two miles east of the DuRoc House is the town of Shingle Springs, named for some clear springs and a shingle making machine erected here by some immigrants, among whom were Henry and Edward Bartlett.

In 1850 one of the Bartlett brothers built the Shingle Springs House (later known as the Locust House) on a hill south of the road at the west end of town. The lumber to build the hotel is said to have come from the east coast by ship around Cape Horn.

Only a short time after it was constructed, the Shingle Springs House was sold to Humphrey Taylor. Some time later it became a general store kept by E. M Hiatt, a gentleman from Missouri, who then sold it to Daniel Tompkins Hall.

Hall opened the town’s first U. S. Post Office in this building on February 3, 1853 with himself as postmaster. After several other owners, it was remodeled and became known as Mary’s Inn.

Just east of the Shingle Springs House was a log cabin called the Missouri House, which was built by R. S. Wakefield in 1851. A year later Wakefield built the Planters’ House on the same site. It burned down in 1863 and was immediately rebuilt.

After Wakefield died of smallpox, his widow married Daniel Hall and they ran the place for a number of years. Finally it was sold to John Russi, who owned it until it burned in 1933.

A mile east of Shingle Springs proper was a mining camp known as Buckeye Flat. Since Shingle Springs had no stores until 1857, the miners in the area had to travel there for supplies.

Named for the first settlers, some men from Ohio, Buckeye Flat had three stores, kept by Henry Kingsley, Henry Yealing and Fred Heldman, and one hotel, which was owned by a Mr. Rockwell. Now only a named spot on old maps, it’s demise started when the first store in Shingle Springs opened near the Planter’s House, much closer and more convenient to the mines. Buckeye School is located in Buckeye Flat.

Less than a mile further east along the road was the Forty Mile House. It and several barns were located on the south side of the road, just north of the head of Forty Mile Creek.

There is not much information about the Forty Mile House itself, other than it was active in 1853 and may have been run by a Thomas Davidson, who owned a nearby toll road. However, there is an interesting tale about it.

The story goes that a teamster who had slept in a little cabin near the barns, woke to find that his poke, filled with $50 gold slugs, was missing from beneath his pillow. A thorough search turned up nothing and the upset teamster left, believing he had been robbed. Later, it was found that a packrat had been taking items from the cabin and hiding them in a hole under an oak tree. There is no record as to whether or not the gold was recovered or is still there.

Ultimately, the Forty Mile House burned and the barns were torn down. The site became today’s Forty Mile Ranch.

Note: A major source for this article is a book called “The Early Inns of California 1844-1869”, by Ralph Herbert Cross. Copies can be found in the rare book section of the El Dorado County main library.