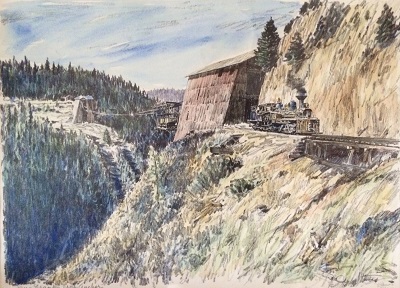 Development of the Camino area began in the 1860s and involved two Scottish brothers whose names remain famous in the local timber industry, James and John Blair. They are credited with being the first to start a lumber company in the area which, for many years, bore their name. For a while they also maintained the Sportsman’s Hall, that now historical spot which both the drivers of freight wagons to the famous Virginia City mines and the Pony Express used as a stopping place.

The town proper, which is located just a few miles east of Placerville on the ridge between the South Fork of the American River and Weber Creek, did not really develop until sometime around 1895 when the American River Land and Lumber Co. bought out the Blairs. They had timberland and lumbering operations in the Georgetown Divide area, on the other (northern) side of the South Fork of the American River, including an area that would be called Pino Grande. They had nine and a half miles of railway and equipment to transport the logs from the forest to the American River. From there they floated the logs down the river to the first electric driven sawmill in the United States, next to the Folsom Powerhouse. However, the river almost dried up in the summer and because of that and the rocky nature of the canyon, many logs ended up stuck and never made it to the mill.

Their land holdings and the mill were later acquired by T.H. McEwan who organized the El Dorado Lumber Co., moved the mill from Folsom to Pino Grande and established a drying yard in Camino.

It was McEwan who built the famous cable tramway across the canyon of the South Fork of the American River, transporting the lumber from the Pino Grande mill to the end of what is now Cable Road in Camino.

The cable system it was installed in 1901 and operated for nearly half a century, carrying the lumber around a half mile from one side to the other. A narrow gauge railroad took the rough cut lumber from the mill to a tower on the north side where the carriage was loaded, moved across the gorge and unloaded in a tower on the opposite side onto the narrow gauge railroad which took it to the mill in Camino.

During its history the cable tramway also hauled supplies to Pino Grande and sometimes even people. Because of its unique character, it was also used as a location in a few movies, including one featuring an early movie dog named “Strongheart,” after whom a dog food was named.

In the early 1900s McEwan built the railway from the Camino yard to Placerville in order to get his lumber onto the trains of the Southern Pacific, which had arrived there in 1888.

After closing for a short time, in 1915 the mill and holdings were taken over by the C.D. Danaher Pine Co. and later, in 1918, were merged with the lumber interests of John Blodgett. The combined units then began the Michigan California Lumber Co.

Later Michigan California Lumber Co. was acquired by Sierra Pacific Industries. Unfortunately, downturns in the economy and increasing regulations on timber cutting made the mill unprofitable and it closed. The mill still remains as the center of this small foothill town.

Through these successive stages of development the town continued to grow until it became a thriving lumber community. However, lumber, though extremely important in the development and economy of Camino, was not all the activity there was during that time.

When the railroad arrived in Placerville in 1888, fruit growers had the opportunity to expand their market substantially and orchards began to expand in response to that. Because of its excellent, fertile soils and pleasant ridge-top climate, the Camino area became one of the largest pear growing districts in El Dorado County.

Because of the increasing lumber and fruit business, the Camino Post Office was established on June 22, 1904. It is still in operation and was originally listed as being four miles east of Smith’s Flat and two miles west of Fyffe (believed to be Sportsman’s Hall, although the distances are incorrect).  The first postmaster for Camino was Margaret S. Hoff.

With the “pear decline” of a number of decades ago, most of the pear trees were removed and replaced with other trees, like apple and stone fruit, but that was not all.

In the 1970s winegrape vines also began to fill some of the fields and wineries started developing in and around the Camino area. Vineyards were not entirely new to the area, but had been let go during Prohibition.

Now Camino is home to nearly a dozen premium wineries and hundreds of acres of vineyards. These wineries have become “world class” and are successfully competing with the more famous wine producing areas of California and even the world.

In response to the new agricultural production Camino became the geographical center of Apple Hill, a grower created organization promoting direct produce and product sales to the public. Now hundreds of thousands of visitors come to the area in the fall and early winter for fruit, wine, fruit products and Christmas trees.

Because agricultural pursuits have rapidly become the leading industry of the area, the county recently recognized and protected it as an important Agricultural District.

On a drive through town, along Carson Road, one can still see the remnants familiar to a lumber town, like the small houses adjacent to the mill and the nearby shopping area. Within the center of the town are restaurants and stores, and the Camino Hotel.

Outside of town, generally towards the north, the countryside is filled with orchards, Christmas tree plantations and vineyards. Scattered among these are the wineries, a micro brewery and many owner operated fruit stands, bakeries, gift shops and restaurants where you can purchase freshly picked fruit, wine, and, during the season, a cut-to-order Christmas tree. Most of the orchards and tree farms have picnic areas and some even have train rides or fishing ponds to entertain the child in all of us.

Born from lumber and nurtured by agriculture, Camino has become one of the loveliest areas in beautiful El Dorado County.

Sources for this story include: “Transactions of the California State Agricultural Society during the Year 1894.” California State Printing office (1895); “History of El Dorado County”, by Paolo Sioli (1883), reprinted and indexed by the El Dorado Friends of the Library (1998); the archives of the Mountain Democrat (1854-Present); and the wonderful people at the reference desk of the El Dorado County Main Library.

For more information on Pino Grande, see: “Pino Grande: Logging Railroads of the Michigan-California Lumber Co.,” by R.S. Polkinghorn, which was originally published in 1966 with later revisions and printings.