It started out that I wanted to go to Cash & Carry, which is located on Richards Blvd. in Sacramento. They carry a certain brand of hot dogs that I wanted to check out. My friend Russ Salazar was up for it, so he picked me up and we headed that way.

Well, you know we can’t go to Sacramento without making a stop or two to sample food, so prior to meeting up both of us came up with a place we wanted to visit but hadn’t before.

We ended up with two that were on our way, both highly rated “retro” places: Suzie Burger and Nationwide Freezer Meats. 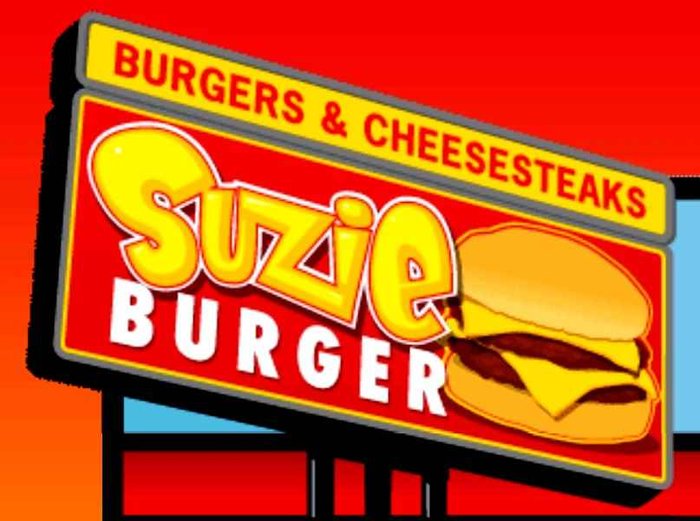 Our first stop was Suzie Burger, which is at 2820 P street, the corner of P and 29th. It appears to be in an old gas station and has been there for a long time. The front area of the old station is one dining area, the garage bays are a larger one and there are even several tables outside. In between the two dining areas is the kitchen.

Parking is limited, but you can park on the street. We found a spot where the old gas pumps had been located and walked in.

They have a very large menu, but feature burgers. We decided to try a simple cheeseburger and something that was on special that day, Philly Cheesesteak Tater-Tots. We placed our order and found an empty table in the larger dining area. In a few minutes they called our number.

The burger was very good with lots of pickles and a thin layer of coleslaw, along with all the other regular items. The coleslaw was a surprise that really added a bit of texture and moisture.

Russ and I both liked the Philly Cheesesteak Tater-Tots, but Russ thought they would come with slices of grilled meat, rather than crumbled hamburger. We both grumbled a bit about the meat being overcooked, but we ate every bit of them.

Our next stop was Nationwide Freezer Meats at 1930 H Street, which is at the corner of H and 20th. Although not always at this location, it has been around as a meat market or restaurant since the 1960s.

They have some interesting murals on the walls showing things like downtown Sacramento with trains, boats, etc., painted like hot dogs, along with a lot of “Coca Cola” memorabilia.

Their speciality is the French Ground Steakburger, which comes with a one-third pound, fresh ground beef patty as a single, double, tripple (that must be French for triple) or quadruple, on a soft and chewy French roll. We decided to try it, but only a single patty.

Also on their menu board were several hot dogs. Russ got a positive reply to his question,”Do you make your own chili,” so we ordered a chili dog. I asked if any of their hot dogs was old-fashioned with a skin on it. They said that the “longer dog” did, so we had that in our chili dog.

Although it is all inside seating, they serve your food to you in the same bag on which they wrote the order and handed to the cooks to fill.

The burger was good and the bun was nice and almost too chewy, but with a single patty, it was really too much bread.

The chili for the chili dog was mostly beans. It wasn’t bad chili, but both of us prefer beanless chili as a condiment (I know, we should have asked). The “longer dog” was a regular hot dog made by the Evergood Company. That is one of Russ’ favorites, but to me it is too salty, something I actually mentioned before we knew who made it. I wonder how big their regular dog is if this is “longer.”

While we were finishing, they brought us some of their large, Fresh-Cut Steak Fries to try. I liked them, crunchy on the outside and soft inside. Russ said they needed a steak to go with them.

Our last stop, before returning to home was Cash & Carry at 1101 Richards Blvd. When Russ was employed by the State, his office was near, so he knew the way. I would have been lost for a while.

Cash & Carry is a wholesale supplier for small restaurants and the public. They carry a brand of sausages from a small factory called Cloverdale, in North Dakota. They make the hot dog for the Seattle Mariners that a friend brought me from Washington. I loved them and wanted to see what else they had.

They have a huge selection of everything you would need, from bread to meats to spices and, well, you name it. It is quite like Foothill Food Service in the Diamond Springs Industrial Park, but with a slightly larger meat and deli section (haven’t been to Foothill Food Service? It’s open to the public. Check them out).

I looked and looked, but didn’t find anything that excited me, as they were out of the ones I wanted. I did pick up a bag of different rolls to try.

As to the food at the two restaurants, it was good and different, but I still think I can do better right here in the Placerville area. I always put coleslaw on pulled pork, but never thought about it on a burger.