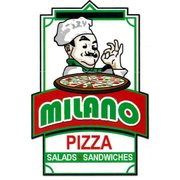 A couple of weeks ago I came across a picture of a wonderful combination pizza from a small pizzeria in Cameron Park called Milano Pizza. It was called the Milan combo and was a combination of ham, salami, pepperoni, mushrooms, black olives, bell peppers, red onions, ground beef, Italian sausage and linguica (that’s six meats and a lot of good veggies).

I immediately contacted my friend and accomplice, Russ Salazar and said, “We really have to try this.”

Milano Pizza is easy to find as it is located in the small shopping center at 3958 Cambridge Road, just north of the freeway. So, one Thursday around noon we drove there.
Most of their business is take-out, but they do have three inside tables that seat four or so people each.

We sat down at an unoccupied table and started going over their menu. There are any number of pizzas available (even create your own), along with a list of appetizers, calzones, spaghetti and lasagna, sandwiches, salads and even cannolis for dessert.

After our normal mumbling conference, we decided on a small (10 inch) Milan Combo on a thin crust and something they called Milano Oven Baked Crispers, which is a 10 inch crispy dough with homemade white creamy garlic ranch sauce topped with mozzarella, provolone and Parmesan cheese. We also opted for a two-liter bottle of Diet Pepsi, since they don’t have fountain soda (actually a better deal).

While waiting for our food, I talked with the gentleman behind the counter (he said his name was Mo) about the place. He told me that this store had been open about two years, but that the Milano Pizza at 3900 60th Street in Sacramento had been open for 20 years.

First to arrive was the Milano Oven Baked Crispers, which actually looked like a nice cheese pizza. Russ looked at it and said, “That looks like a New York street pizza, which they call a ‘pie,’ not a pizza,” while picking up a piece.

“The crust could be a bit crisper and make a noise when you eat it,” he told me after trying it. “However, I really like the flavor.”

He thought they had added a bit of olive oil to it, which they can do, but after talking to the owner (Fred) a few days later, I think it was actually the ranch dressing that added the smoothness he enjoyed.

I tried a piece of the “crispers” and had to agree with him. Sometimes simpler is better.

While we were enjoying our “first course,” our pizza arrived. It looked delicious and was nicely assembled and presented.

Although it tasted very, very good, the crust was a bit too moist and had very little crunch, except for the part around the edge. I believe that was a result of their being so many high moisture and fat toppings. Russ thought the oven was also not hot enough when it was baked.

I discussed this too with the owner. He said they have a new oven, which might be an issue. However, I did tell him that we really liked it and left none of it on the plate.

In addition to the menu items I already mentioned, they have a number of pizza specials, lunch specials and more. For more information on that, check out their webpage at www.cameronparkmilanopizza.com/ or give them a call at (530) 676-1616.

Milano Pizza in Cameron Park is open daily from 11 until 9.

Milano Pizza is now accepting online orders for takeout through BeyondMenu.com. Enjoy the best, freshest pizza, sandwiches and salads, and remember: there is no waiting in line when you order online.

← Where Did That Road Name Come From? U – V
Steppin’ Out – Fernando’s Costa Del Sol Restaurant →