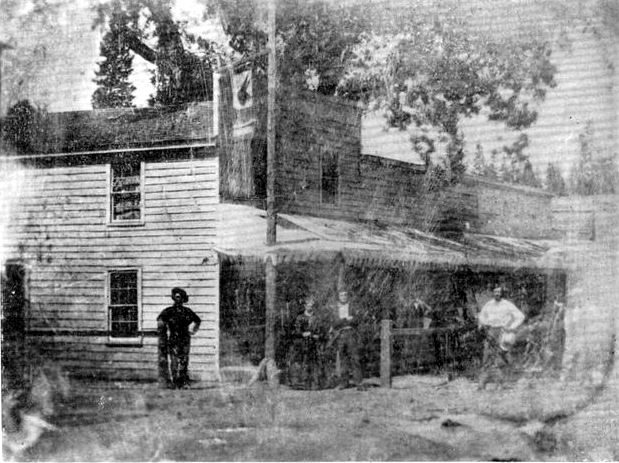 The historic brick Herrick Building and the adjacent “Hangman’s Tree” bar are in the process of being lovingly rebuilt by the owners, the Taylors. Their action saved them from an attempt by the City of Placerville to have them torn down. It is very fortunate that someone like the Taylors came along because this site has quite a history, going back to the very early days of the Gold Rush.

The first building of any size erected on the northeast corner of Main and Coloma (now Center) streets was a wood frame structure known as the Placer Hotel. It was built around1849 and owned by R. W. Barkhurst and Joseph Bullis. Bruce Herrick, newly arrived from Ohio and a cook at the hotel, formed a partnership with several others and bought the building in 1850. He and his wife, Elizabeth, operated it as the “Jackass,” “Hangtree” or “Hangman’s Tree Inn, depending upon whose history you read. Adjacent to it, in the same building, was the El Dorado Saloon, run by M. R. Elstner, whose name will come up again.

The “Jackass” name comes from an old photograph of the building that shows a sign with the head of a jackass on it. The “Hangtree” and “Hangman’s Tree” names make reference to the oak tree that was once adjacent to the building.

I was from that famous tree that three men were hanged on January 21, 1849 after being tried under the laws in effect at the time. That event would not only provide the name for the inn, but also for the town, which retained the name Hangtown until 1854 when it was incorporated as Placerville, since some officials of the State of California did not feel Hangtown was an appropriate name.

In 1853 Herrick, now believed to be ths sole owner the building, tore it down and replaced it with a new, two-story, fireproof brick building, most likely made with bricks from his brickyard in Oregon Ravine, a short distance away to the south. The building had a 40 foot frontage on Main Street and 60 feet on Coloma Street, the exact size of the building today, not including in Hangman’s Tree Bar, which is on an adjacent lot.

In order to build such a building, the tree, which is reported to have been on both his lot and the adjacent lot, had to be cut down and there were significant objections to it being done. One objector, an immigrant from Indiana named Joe Fisher, went so far as to compose a poem from his feelings:

Herrick, spared that tree!
Let not its branches fall;
Here let it always be
A warning to us all.
For it was in forty nine,
When our good town yet was young,
Three men for murder vile
Upon that tree were hung.
Yes, on this same old tree
These miscreants met their doom;
Keep it for all to see –
As a grave-tree o’er their tomb.
This tree let always stand!
For ‘tis of great renown;
Then, Herrick, Stay thy hand;
Spare this relic of our town.

In spite of Fisher’s poetic pleading, the tree was cut down down by Herrick with the help of another Indianan, wheelbarrow maker John Mohler Studebaker. 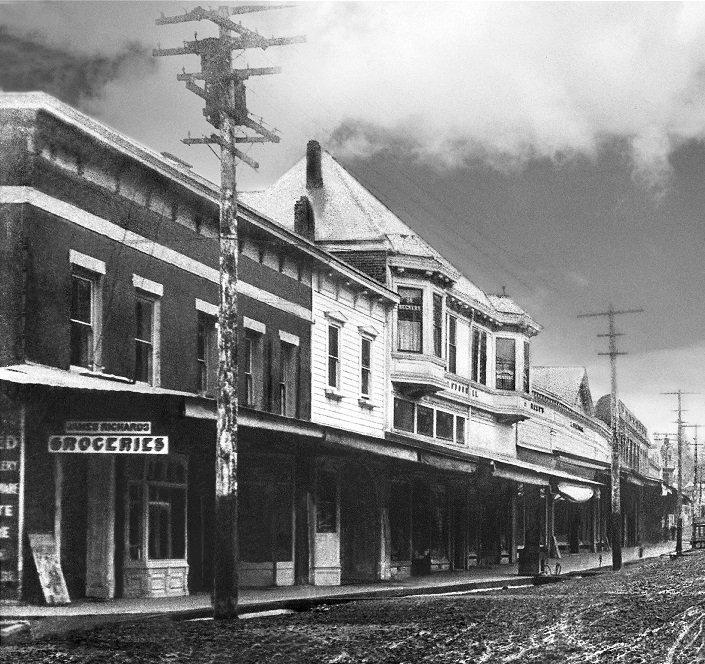 In 1856 Placerville had at least three large fires, the July 6 one destroying much of the city and partially Herrick’s building. He is believed to have sustained damages of some $10,000 as a result of it.The damage to the hotel was repaired and the business continued. Then on October 2, 1857 Bruce Herrick passed away after a long illness, leaving a wife and three small children.

According to his obituary in the October 10 issue of the “Mountain Democrat” he was a well liked person in the city and a volunteer fireman with the Hope Hook and Ladder Company. In his honor the different fire departments draped their machines and houses in “the habiliments of woe.”

Earlier that year, probably because of his illness, the building was shown as being for sale as a “Well known brick, two story building the the corner of Main and Coloma…Haidie Saloon on the first floor.”

In 1860 the building passed into the hands of A. C. Henry and soon became known as the Henry building in newspaper articles. An advertisement in the January 16, 1872 Democrat makes reference to the “Shady Saloon, corner of Main and Coloma, opposite the Cary House, W. B. Farrell proprietor.”

Jumping ahead several years, after the building passed through a few hands, we find it is owned by a J. A. Sigwart, who may or may not be the same person who bought half interest to it in 1879. A recorded agreement between the two indicates that one F. F. Fisher was to clear the lot, excavate and construct iron work, brick work, etc. for $1925.
In 1934 Pardee’s Market was in the building. In 1937 it became Pardee’s Grocery. Then in 1938 George Fausel purchased the business and ran it as George’s Market. Around 1947 the name changed top Butch’s Quality Market and then P. & M. Cash Market. In 1951 it is listed as P. & M. and Butch’s Quality Market No. 1. Gene Barraque purchased the business in 1955 (taking Bob Higgins as a partner in 1965) and ran it as P. & M. Market, a name it would retain until its closing on July 9, 1980. 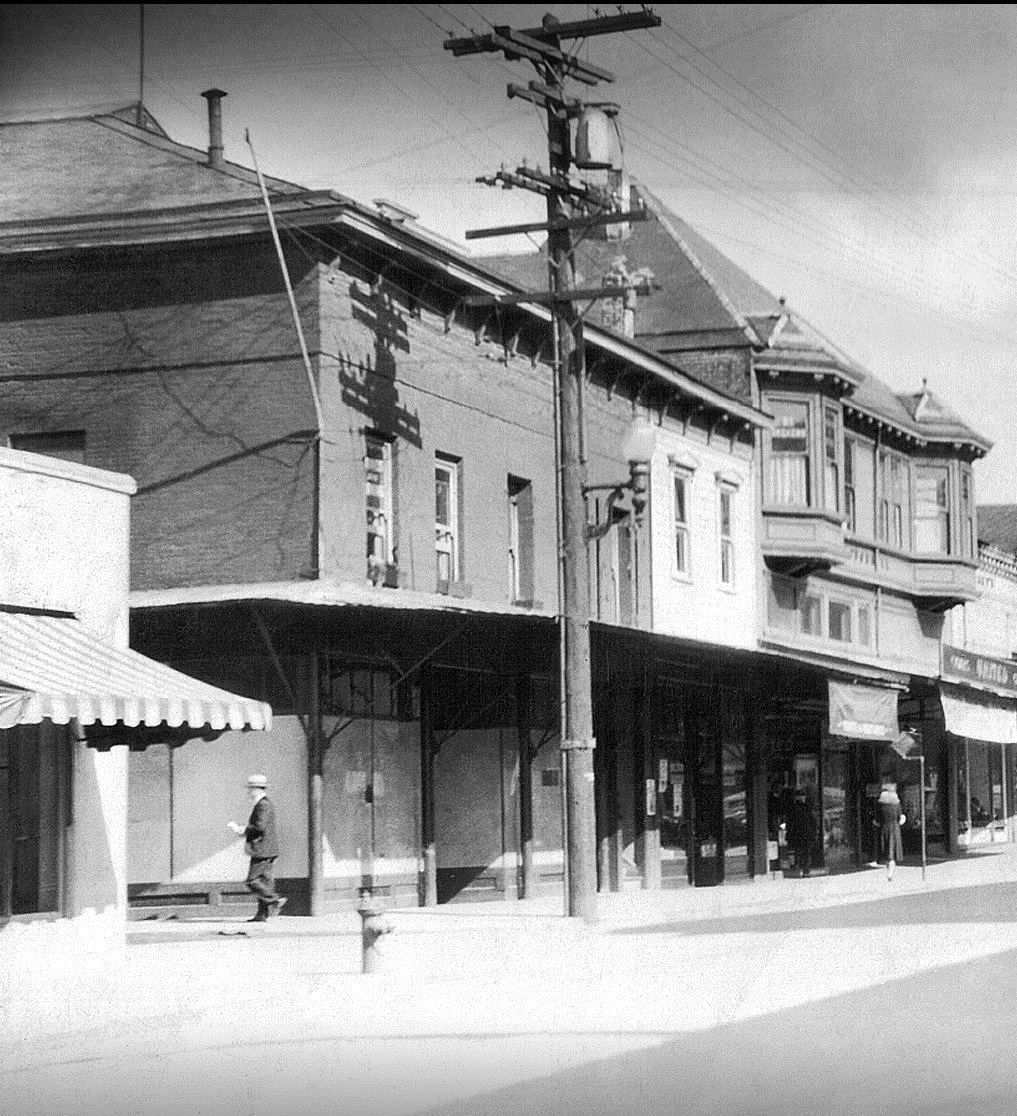 Over the years following, the building was the home to two restaurants, catering businesses and a home gifts and accessories store. It is now vacant while under restoration..

Dr. Robert Rankin is the first record owner of this lot and in July of 1850 sold his log house to Collis P. Huntington and partners. Huntington, who would become one of the “Big Four” that built the railroad from Sacramento to Promontory Point, Utah, where it connected with the tracks of the Union Pacific, got his financial start with his store at this location and another one at Mormon Island.

From 1853 until 1856 John Hettinger operated the Chicago Clothing and Tailor Shop at this location. After the fires of 1856 Francis Mell and his wife opened the first Ohio house here.

The same June 1886 map of the City referenced before, indicates that a barber is occupying this space, while the the same January 1891 “Sanborn-Perris” map gives it an occupancy of “N.G.,” which is most likely an abbreviation for notions and goods.

On June 6, 1934 this location became California Historical Landmark No. 141. The sign says, “In the days of 1849, when this city was called Hangtown, vigilantes executed many men for various crimes. This was the site of Hay Yard, on which stood the ‘Hangman’s Tree.’ The stump of the tree is under the building on which the plaque is placed.”

Apparently not a lot of research has been done on this building between 1900 and now, but somewhere around 75 years ago the Hangman’s Tree opened at this location and the always controversial hanging dummy appeared over the door.

In 1996 the hanging dummy became controversial enough to warrant nationwide coverage in many newspapers and even an article in the December 16 edition of “Newsweek” magazine.

← I have an Aunt?
Happy Birthday California →

4 comments for “The Herrick Building and the “Hangman’s Tree” Bar – Placerville, California”