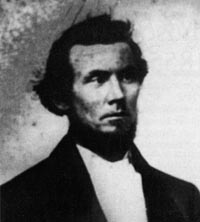 Prior to 1859, when the news of the discovery of silver in the Virginia Mountains of what was then known as Washoe, and later Nevada, leaked out, very few people resided in the Lake Tahoe Basin and fewer had yet explored it. Some supply stations had been erected near both the north and south ends of the lake because of new trails that were being used by the thousands coming west, but the men running the stations were there for the traffic on the roads, not because of the lake.

The eastern boundary line of California was set by its constitution and not only split the lake between California and Nevada, but made a jog near the center of the lake. Politicians had created the boundary in spite of the fact that little if any survey work had been done there. In fact, few realized that the description had even divided the lake, let alone with two-thirds of it in California and one-third in Nevada.

In 1855, George Goddard, who was with the Utah Territorial Commission, entered the Lake Tahoe basin and surveyed the line as it passed through the lake and even located the jog, confirming the ratio of the division. However, it would be many more years before anyone surveyed the remainder of the line as it continued both north and south through the rugged mountains of the Sierra Nevada Range.

John “Cock-Eye” Johnson, who had a way station just east of Placerville, along the immigrant trail, is said to have been the first white man to actually explore the large valley to the south of Lake Tahoe.

He entered the valley by way of a pass that turned north at Echo Summit (later Johnson’s Pass), traversed steep granite cliffs and after crossing Echo Creek, reached the valley. It is said that the trail, as rugged as it was, could be used with some degree of safety by travelers.

His discovery of what is now known as Lake Valley is not usually challenged, but the date is unknown although it is thought to be somewhere between 1848 and 1850.

In 1853 Johnson and a reporter from the Placerville Herald worked their way up the Rubicon River and then down the slope to the lake where they discovered Emerald Bay. As soon as Johnson’s many treks into the valley became widely known, more and more followed his trail to explore Lake Tahoe.

The first white man known to have explored the North Shore of Lake Tahoe was William Stewart. In 1851 he made his way from Auburn through Squaw Valley and down to the Truckee River. He then headed North and east, ending up at what is now Carson City. For some reason, he didn’t come back for many years.

The first permanent building in the Lake Tahoe basin was a log cabin built in 1851 by Martin Smith (he was the one who announced the discovery of gold in the basin in 1853).

Located four miles south of the swampy southern end of the lake, his cabin was advertised as a good place for travelers to get supplies, along with grass and water for their stock, before they started the last climb up to Echo Summit.

Smith’s place was open only during the summer months, as he spent the winters near Placerville. There were no travelers through the basin in the winter and besides, there were often landslides, avalanches and floods around the lake during those months.

In 1854 Smith was joined by Asa H. Hawley, who build a way station a few miles south of Smith’s. He improved the road to Echo Summit (Hawley’s Grade) and, being a shrewd businessman, brought it right to his door.

Smith’s station burned down in 1855 and was rebuilt in 1858 when he, according to the Sacramento Bee, Smith became the postmaster for Lake Valley, although there is no official or other unofficial record of this happening. He would soon leave the basin as would Hawley, but as the number of travelers passing by the southern end of the lake increased, more and more way stations were built.

In 1850 some miners had discovered small amounts of gold in the Virginia Mountains, east of Carson City and Reno. Two brothers, Ethan and Hosea Grosch, who had been previously mining in the Nashville area of El Dorado County, also found silver here, but died before disclosing where.

By the end of the 1850s the miners in the Virginia Mountains were finding less and less gold and it was strangely light in color. A few hills away other miners were complaining about the bothersome dark, heavy blue sand that was mixed with the gold. Neither realized that the blue sand and the light impurity in the gold was silver – and there was a lot of it to be found.

In spite of the fact that the Grosch brothers had done it almost a decade before, the discovery of silver is attributed to two miners, McLaughlin and O’Riley, who worked a claim on land that a Henry L. Comstock said he owned. Comstock would end up becoming a partner of theirs and his name would become synonymous with the find.

When the word got out, even though there were the usual attempts to keep it secret, miners from all over California headed towards the town named for “Old Virginia” Finney, Virginia City. These men, who would be known as ’59’ers or “Comstockers,” traveled up the road from Placerville and poured into and out of the Lake Tahoe basin by the thousands, using any means necessary.

As the mines in Nevada expanded, lumber would be needed to shore them up. The few suitable trees in Nevada were soon gone, so they had to look elsewhere for their timbers. What better a place to get it, they figured, than from the heavily forested mountains around Lake Tahoe.