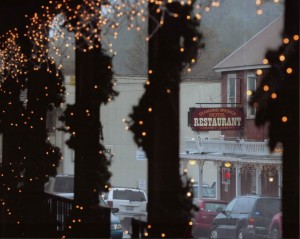 “Macaroni and cheese. Sunday pot roast and vegetables. Southern Fried Chicken. Ooey-gooey grilled cheese. Spaghetti and meatballs. These are all the things that make your pants too tight and your self-esteem plummet. But it’s totally worth it!”
Unknown Author

As I have said several times before, when people ask me about my favorite place to eat, the Diamond Springs Hotel almost always comes up somewhere in the conversation. Then the person asking takes over and tells me how much he or she likes the place. It happens almost every time.

The reason for these complements is that the Diamond Springs Hotels serves real food, what many call comfort food. If you look that up in a dictionary, you might find them listed there. All kidding aside, that is what they serve, that is what they are known for and they do a great job of it. Let me give you an example.

A few weeks ago my daughter and her family came up to visit me. It was lt was around lunch time and we decided to go to the Diamond Springs Hotel. Once there we were graciously greeted and seated at a table for five. In just a few minutes, everyone easily found something they liked on the menu.

Daughter Erika ordered a Monte Cristo, a turkey, ham and Swiss cheese sandwich that is often deep fried, but instead they grill it before dusting it with powdered sugar. She really likes that sandwich, but cannot find it many places.

Son-in-law Roy ordered the country-fried steak and eggs with potatoes, gravy and everything else. Stella, who is eight, ordered a child’s hamburger and Harris, who is five, ordered a grilled cheese sandwich.

I had my usual, the breakfast of two eggs, sausage and an English muffin. I pick that because my waist doesn’t need the potatoes and they have the best orange marmalade around and it goes great on an English muffin.

In a short plates brimming with food arrived and it was a real feast. Nothing was left and like with most families, several of us were invited to take bites from other’s plates.

The service was great, everyone was full and happy when we left and the total bill was under $10 a person, which is not bad for three adults and two children.

The history of the Diamond Springs Hotel goes back to somewhere between 1916 and 1924, depending upon who you read. First called the Diamond Hotel, it was managed by Antone Meyer and run by the Meyer family into the late 1930s.

Amy and Moon Shim have owned and run it for nearly nine years. Amy is the one who greets everyone like they are a guest in her home, even if she has never seen them before. And, when they leave, she thanks them, asks how everything was and really wants to know.

Moon works in the kitchen area and takes over when chefs Leonard Landers and Kevin Schultz are off. They have trained him well and I don’t think there is anything he can’t cook perfectly.

The last time I was there a new person was greeting people, seating them and getting drinks. When I asked about him, Amy told me that he was their son Kevin and that he now has a car to pay for. She said she told him, “you have to make money because banks don’t wait.” She’s right Kevin.

Several times over the years I have tried to fully describe the menu, but always come up short. So I am going to try again.

Breakfast is served from opening until 4 p.m. and that part of the menu starts with literally anything you might want, from egg dishes and pancakes to lobster benedict, lots of omelettes, homemade cinnamon rolls and their famous homemade biscuits and gravy.

For lunch you can choose from several kinds of hamburgers (cooked your way and served on a freshly baked bun), hot dogs, salads, soup and chili, a dozen or more different hot and cold sandwiches, “lite faire,” meatloaf, country fried steak, fish and chips, trout, chicken, and on and on and on.

They have several specials every day and on Friday and Saturday night they have prime rib for only $16.99. It is a perfect 9 ounce cut with all the trimmings.

To accompany your meal they serve, coffee, tea, milk, soda, beer, wine, juice and hot chocolate. And yes, some local wines by the bottle.

Nearly everything on the menu is made from scratch with loving care.

The Diamond Springs Hotel, which is located at 545 Main Street in Diamond Springs, is open Tuesday through Thursday from 7 a.m. until 8:30 p.m., Friday from 7 until 9, Saturday from 8 until 9 and on Sunday from 8 until 2. Closed on Monday. For more information call 530-621-1730 or check out their webpage. It has their complete menu, history and more and can be found  at http://diamondspringshotel.comcastbiz.net/DiamondSpringsHotel/.

Stop by and try some “Old Fashioned Country Cooking” prepared and served by great people. You’ll love it.