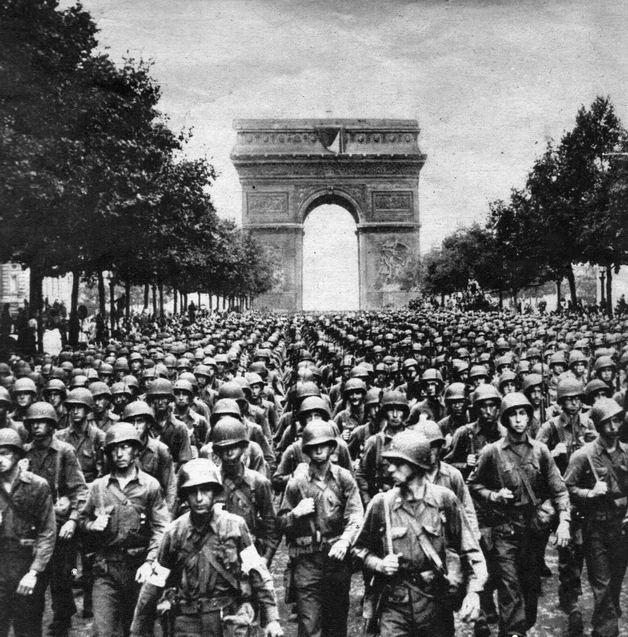 Liberation of Paris in 1944

I was seven and my grandfather held my hand as we walked the few blocks to Colorado Blvd. in Pasadena, CA, the city were I grew up. I believe it was Armistice Day (now Veteran’s Day) in 1945, but because that is the year that World War II ended, it may well have been one of many celebrations of victory that happened following the defeat first of Germany and then Japan.

Pasadena loved parades and every Armistice Day and Memorial Day there was one. I went to many of them, but this parade was like none other I can remember. It was made up of bands, color guards and hundreds and hundreds of soldiers and veterans.

My grandfather had told me, as we walked from our house, that like I had learned to do while reciting the Pledge of Allegiance, it was proper to stand tall, take off my hat if I had one and place my right hand over my heart as the American Flag passed by. And there were many that passed by that day.

I can even recall at a later date my grandfather doing that in a movie theater when our National Anthem was played and an American Flag showed on the screen. As he pulled me up to stand beside him in that darkened theater, I remember that slowly others stood to join us. It was a different era.

The first soldiers to march by in the parade that day were young American men fully outfitted in the uniforms of World War II, all in neat rows and marching proudly in precise step.

They were the heroes of the hour, part of the 16.5 million Americans we now call the Greatest Generation. At great cost they, and millions of others like them, had brought freedom to the world.

Following a bit behind them were some men and women I now know were in their late forties and early fifties at the time. Some were dressed in a different uniform, a uniform that on many didn’t quite fit. They were American veterans of an earlier war, World War I, the “Great War,” the “War to End All Wars.” Some marched, some walked and some were helped along by others.They were less organized than the first group and appeared to be having a great time. One man, I recall, drove a motorcycle with a sidecar that was a relic from that war. To the delight of the crowds gathered along the street, especially this seven year old, he would tip the motorcycle so that the sidecar was in the air and drive circles in and around his group of scattering comrades.

Later in the parade were a group of men mostly in their sixties and seventies. They, like my grandfather, were American veterans of the Spanish-American war. There were not so many of them as were in the preceding groups and some rode in cars. But those that walked stood just as proud as the others and my grandfather, also standing a tall and proud as they walked by, saluted them over and over.

Toward the end of the parade was a single car in the back seat of which sat either one or two men, but the number is not important. I remember very distinctly an old man waving to me and my grandfather saluting him. I asked, “Grandpa, who is that man?” Somewhat emotionally he replied, “A Union veteran of the Civil War.” His father, who had died in 1908, had been one of them.

At seven I didn’t know much about the wars, other than World War II, which I had lived through, collecting aluminum, old tires and bacon fat and buying saving stamps and war bonds for the “war effort.” And on the day it ended, my brother and I, donning cooking pots as helmets, carried our American Flag as we marched up and down the street while church bells rang and car horns honked all over America.

As I grew up I learned  that in the 1940s veterans of both sides of the Civil War were still annually gathering together, the Union soldiers calling their gatherings  “The National Encampment of the Grand Army of the Republic” and the Confederate soldiers calling theirs  “The Reunion of the United Confederate Veterans.” Mostly they had separate gatherings, but 24 times they met jointly, once even at Gettysburg, on the 50th anniversary of that battle.

Recently, as I thought about those men that I watched march by that day in 1945, I wondered what happened to them.

Nathan Edward Cook, a sailor who died in 1993, is considered by many to have been the last remaining American veteran of the Spanish-American War, although Jones Morgan, an African-American soldier during that period, who died in 1992, may also hold that title. Again, birth and military record issues.

Frank Woodruff Buckles was the last living American veteran of World War I. He entered the U.S. Army at 16, but claiming to be 18 as his state of birth, Missouri, did not issue birth certificates. He resided in Charles Town, West Virginia until passing away on February 20, 2011 at the age of 110.

According to the U.S. Department of Veterans Affairs, 389,292 of the roughly 16 million American World War II veterans are still alive as of 2020. About 370 of them die each day, way too soon they too will be reduced to only a few and then there will be none.

I have ancestors who fought and died, sometimes on both sides, in wars as far back as the American Revolution, and maybe even further. I am sure all of us have similar connections with ancestors, relatives and friends who have fought for their country or are doing so in wars today.

We should take the opportunity of Veteran’s Day to personally thank the living and remember the brave millions of others who fought and died, for the freedom we hold so precious.