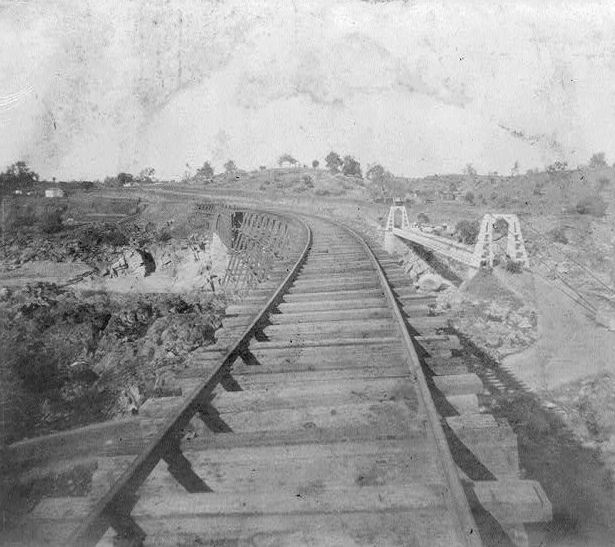 The now abandoned railroad which served Placerville from Sacramento was originally called the Placerville and Sacramento Valley Railroad and was an extension from Folsom of the Sacramento Valley Railroad. Its history began in the early days of the California Gold Rush and involved many men familiar to all of us, including railroad engineer Theodore Dehone Judah, military general William Tecumseh Sherman and, on the opposing side, the “Big Four:” two Sacramento hardware men, Collis P. Huntington and Mark Hopkins, a grocer named Leland Stanford, and a dry goods dealer named Charles Crocker..

This story started as a three-paragraph synopsis prepared for El Dorado County’s first fight against the abandonment of the railroad by Southern Pacific in the mid-1980s. At the request of the county’s attorney, it was expanded by the author into a ten page document for inclusion in the pleadings. During the following years it was added to on numerous occasions as more and more information was discovered. The story of the creation of this, the first commercial railroad in the west, is an interesting and important part of our history.

Before the paddle wheels on the steamer “Oregon” had fully stopped, a young man with a vision stepped onto the dock at San Francisco. It was late in 1849, and the town was crowded with gold seekers that had heard of the instant riches lying in the streams and rivers of northern California. Most had left their homes and families in the search for it, but Colonel Charles Lincoln Wilson was different.

Wilson had been an orphan born on a farm in Maine and raised by neighbors. Early in life he enlisted in the army, which at that time was waging war with Mexico. Through rapid promotion, Wilson reached the rank of colonel and then left the service to become a successful business man in New York. His background was in transportation, and now he was looking for success, not gold, in this new land.

When the “Oregon” pulled away from the San Francisco dock, another military man, Lieutenant William Tecumseh Sherman was on board, leaving California for the East. He had heard of Asa Whitney’s scheme for a coast-to-coast railroad and had actually spent some time scouting passes for a possible route. His future father-in-law, Thomas Ewing, then Secretary of the Interior, had obtained for him a new assignment on the East Coast, and he felt he had seen California for the last time. He would soon return though, and his path would cross with that of Colonel Wilson’s.

By the spring of 1850, before California was even a state, Colonel Wilson owned a steam schooner that carried passengers and freight up the Sacramento River to the gateways to the Sierra foothills and the mines. He soon expanded his business to include a plank toll road and a toll bridge which, although built at great personal expense, poured profits into his rapidly expanding businesses.

With his bride, Sarah Jane Rood, a wealthy woman in her own right, they cruised along the Sacramento, watching the endless trains of wagons carrying freight from the river to the two main foothill towns, Negro Bar and Mountain City (later to become Marysville). Through their enterprises they accumulated a half-million dollars, and in 1852 they decided that iron rails from Sacramento to these two towns would be a profitable investment.

At this time they took into their grand plan another transportation man, Commodore Cornelius K. Garrison. He had come west at the request of the Vanderbilts to help with their Nicaragua Steamship Line. He had made a small fortune in Panama and, after living a short while in San Francisco, had been elected its mayor. He would also be one of the first to help finance the early Pacific Railway surveys and was an ideal choice as a partner.

Early in 1852, another group of men had gotten together and incorporated the Sacramento, Auburn and Nevada Railroad, which was to be built to serve Negro Bar and Nevada City. Their scheme collapsed when it was reported to them that the first section of track they wished to build would cost in excess of two million dollars.

Colonel Wilson reorganized this abandoned railroad company as the Sacramento Valley Railroad. His plan was to first connect Sacramento to Negro Bar and Mountain City (Marysville) with future extensions to Tehama, Sonora and San Francisco. On August 16, 1852, the Articles of Incorporation were filed and Colonel Wilson left for the East Coast to acquire more capital, rolling stock and engage an engineer to build the railroad.

Once in New York, he contacted the engineering firm of Robinson, Seymour and Company. Seymour’s brother, the Governor of New York, sent Wilson to see a young survey engineer, Theodore Dehone Judah, who had just put a railroad through the Niagara Gorge and was very interested in the Pacific Railway. On April 2, 1854, Wilson and Judah left for California and, shortly thereafter, Judah opened up an office in Sacramento’s Hasting’s Building, at the southwest corner of 2nd and J Streets, and started the business of surveying the Sacramento Valley Railroad’s proposed route.