As you know, I am a fan of spicy food and will usually try anything once. However, I am not like those crazy folks on “Youtube” who are trying to prove something by eating a whole Ghost Pepper or even a Carolina Reaper. Few are successful and all suffer.

A couple of weeks ago my friend, Russ Salazar, and I had talked about a visit to a local burger place, but then I saw the commercial for Taco Bell’s new Dare Devil Loaded Grillers.

These are small grilled burritos that are filled with seasoned beef, red tortilla chips, nacho cheese, and one of three spicy sauces: Mild Chipotle, Hot Habanero, and Fiery Ghost Pepper.

The hotness of peppers is measured in Scoville Heat Units (SHU), which are a function of its capsaicin (the stuff in pepper spray and arthritis creams) concentration. The scale is named after its creator, American pharmacist Wilbur Scoville, and it presently ranges from zero for the bell pepper to over two million, two hundred thousand, a record which is presently held by the aforementioned Carolina Reaper.
The test is done using a specific amount of pepper, extracting the capsaicin and then diluting it until a group of people can no longer detect the heat. People argue that it is too subjective, but that is the test we go by.

Russ and I met at the Taco Bell on Broadway in Placerville and, since they were only a dollar each, ordered two of each variety. Then we decided that since we were going to do more tasting that day, six of them were a bit too many to eat. We divided one of each and I took the other three home and shared them with my one of my neighbors, who also likes hot food. I wasn’t surprised that we all had almost exactly the same opinion.

Before we eat, Russ always points out that it is the crust that makes the pizza and the bread that makes the sandwich. That day he added that it is the tortilla that makes the burrito. “They have to be grilled,” he told me. “If they aren’t, they are too soft and tasteless.” Out of the blue he then added, “I fall for the food ads, but most of the time the product doesn’t live up to my expectations.” In this case, apparently they did.

The Chipotle griller had a good taste and left your mouth nicely warm. The Habanero griller was a bit disappointing. The Habanero pepper has a good flavor, but you couldn’t taste it. As to the heat, it was there, but not that strong. The Ghost Pepper griller was good, but more than a bit sneaky. It started out mild and then the back of your mouth began to warm up significantly. Peppers from Asia have a tendency to initially hold off and then do that.

The Grillers are really good and actually kind of fun, but if you don’t like hot food at all, I would stay away from them. Oh, they look all red and hot inside, but the color comes from the red tortilla chips, not the peppers.

Since we were only a short walk from McDonald’s, we had added to our list that day trying their new Premium Buttermilk Crispy Chicken Deluxe Sandwich. Russ decided that one sandwich (on top of the Grillers) wasn’t enough, so he insisted we try their Jalapeño McDouble, which we both had tried before.

The artisan (an overused word) bun/roll on the chicken sandwich was very nice, we both agreed on that. Russ thought the sandwich was okay at best and I found that like a lot of buttermilk battered food it tasted a bit like baking soda, kind of an off-putting taste.

The Jalapeño McDouble cheeseburger, was just that, a McDouble with added Jalapeños. What I like about it is that in addition to the somewhat tamed Jalapeños, they have added Jalapeño chips, which appear to be deep fried slices of Jalapeño. They add a bit of good tasting crunchiness to the sandwich. Not bad for two bucks.

Since I still have more room to write, the day before we did this test, I drove to my daughter’s in Carmichael to deliver some stuff, pick up more and visit a couple of thrift stores and Smart & Final.

Since we no longer have a Burger King in our area, we stopped by one while out shopping so I could try their heavily advertised Chicken Fries. We asked if we could have a mixed order of the regular and the spicy, but I think that confused them. So, I ordered the spicy ones, along with (manufactured) onion rings and two drinks from the dollar menu.

There are nine chicken fries in an order (maybe that is why half and half confused them) and they were actually pretty good but not really that spicy.

Since I still have more room, about a month ago Russ and I went to Smashburger in Folsom and tried the Windy City burger, a “juicy, smashed-to-order burger that’s made with fresh, never frozen 100% Certified Angus Beef, topped with layers of melted cheddar cheese, haystack onions, lettuce, tomato, and Gulden’s spicy mustard on a hand-cut pretzel roll. 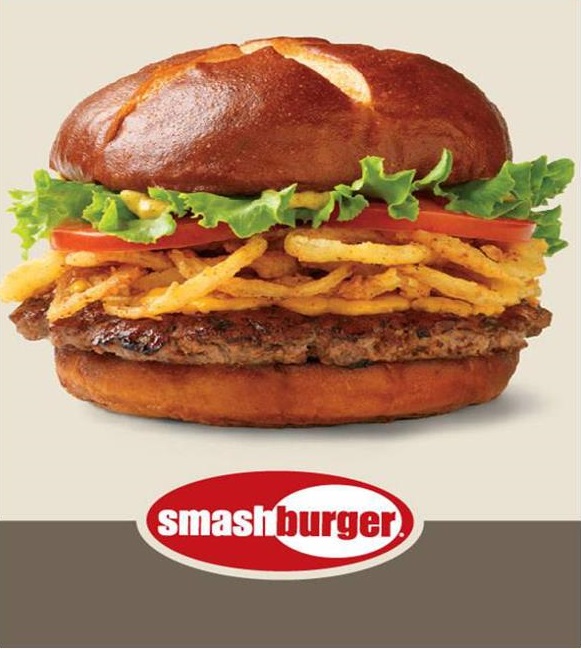 The burger was very good, but what really stood out was the pretzel roll. I love pretzel rolls, but they can be a bit tough. Theirs was excellent and really made the sandwich.