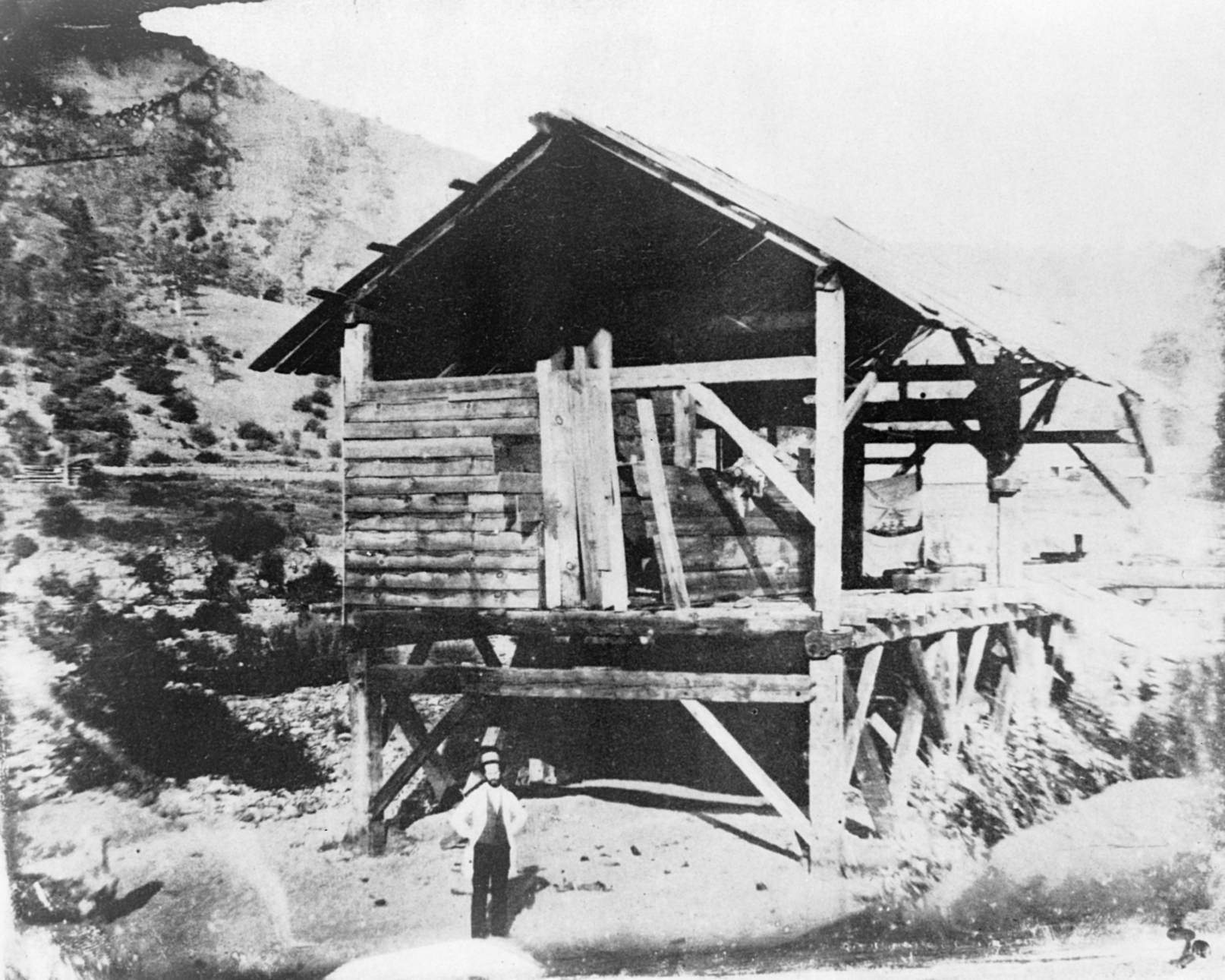 AT THE MILL IN COLOMA

The next morning we went to the tail-race of the mill, through which the water was running during the night, to clean out the gravel which had been made loose, for the purpose of widening the race; and after the water was out of the race we went in to search for gold. This was done every morning: small pieces of gold could be seen remaining on the bottom of the clean washed bed rock. I went in the race and picked up several pieces of this gold, several of the laborers gave me some which they had picked up, and from Marshall I received a part. I told them that I would get a ring made of this gold as soon as it could be done in California; and I have had a heavy ring made, with my family’s cost of arms engraved on the outside, and on the inside of the ring is engraved, “The first gold, discovered in January, 1848.” Now if Mrs. Wimmer possesses a piece which has been found earlier than mine Mr. Marshall can tell, as it was probably received from him. I think Mr. Marshall could have hardly known himself which was exactly the first little piece, among the whole.

The next day I went with Mr. M. on a prospecting tour in the vicinity of Coloma, and the following morning I left for Sacramento. Before my departure I had a conversation with all hands: I told them that I would consider it as a great favor if they would keep this discovery secret only for six weeks, so that I could finish my large flour will at Brighton, (with four run of stones,) which had cost me already about from 24 to 25,000 dollars – the people up there promised to keep it secret so long. On my way home, instead of feeling happy and contented, I was very unhappy, and could not see that it would benefit me much, and I was perfectly right in thinking so; as it came just precisely as I expected. I thought at the same time that it could hardly be kept secret for six weeks, and in this I was not mistaken, for about two weeks later, after my return, I sent up several teams in charge of a white man, as the teamsters were Indian boys. This man was acquainted with all hands up there, and Mrs. Wimmer told him the whole secret; likewise the young sons of Mr. Wimmer told him that they had gold, and that they would let him have some too; and so he obtained a few dollars’ worth of it as a present. As soon as this man arrived at the fort he went to a small store in one of my outside buildings, kept by Mr. Smith, a partner of Samuel Brannan, and asked for a bottle of brandy, for which he would pay the cash; after having the bottle he paid with these small pieces of gold. Smith was astonished and asked him if he intended to insult him; the teamster told him to go and ask me about it; Smith came in, in great haste, to see me, and I told him at once the truth – what could I do? I had to tell him all about it. He reported it to Mr. S. Brannan, who came up immediately to get all possible information, when he returned and sent up large supplies of goods, leased a larger house from me, and commenced a very large and profitable business; soon he opened a branch house of business at Mormon Island. Mr. [Samuel] Brannan made a kind of claim on Mormon Island, and put a tolerably heavy tax on “The Latter Day Saints.” I believe it was 30 per cent, which they paid for some time, until they got tired of it, (some of them told me that it was for the purpose of building a temple for the honor and glory of the Lord.)

So soon as the secret was out my laborers began to leave me, in small parties first, but then all left, from the clerk to the cook, and I was in great distress; only a few mechanics remained to finish some very necessary work which they had commenced, and about eight invalids, who continued slowly to work a few teams, to scrape out the mill race at Brighton. The Mormons did not like to leave my mill unfinished, but they got the gold fever like everybody else. After they had made their piles they left for the Great Salt Lake. So long as these people have been employed by me they have behaved very well, and were industrious and faithful laborers, and when settling their accounts there was not one of them who was not contented and satisfied.

Then the people commenced rushing up from San Francisco and other parts of California, in May, 1848: in the former village only five men were left to take care of the women and children. The single men locked their doors and left for “Sutter’s Fort,” and from there to the Eldorado. For some time the people in Monterey and farther south would not believe the news of the gold discovery, and said that it was only a ‘Ruse de Guerre’ of Sutter’s, because he wanted to have neighbors in his wilderness. From this time on I got only too many neighbors, and some very bad ones among them.