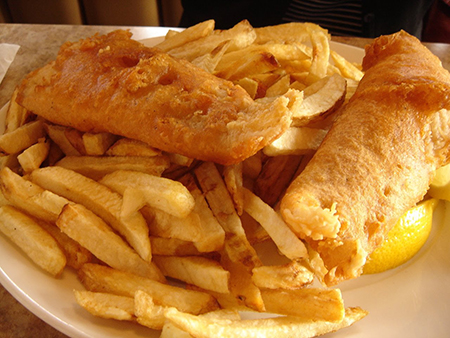 Russ Salazar emailed me last week and said he had Thursday free for lunch. He followed that with a list of restaurants, asking where we should go. I hadn’t been to London Best Fish & Chips in some time, so we decided to meet there.

It is located at 1216 Broadway in Placerville, next to the Japanese restaurant, Teriyaki Junction. After parking we walked up to look at the pictures of the dishes posted in the window. After somewhat deciding what to try, we walked in just to find a “Under New Ownership” sign.

Normally I don’t review restaurants in their first week or so because they are always going through a time of “discovery,” but we decided to try it anyway since we were there and, besides, I wanted fish and chips.

A nice young lady took our order, which was a seafood sampler, with an extra piece of fish and a small bowl of their homemade clam chowder.

We found a table near the window and shortly our food was delivered.

The sampler consisted of one piece of fish (that’s why we ordered and extra one), two oysters, two scallops, three shrimp and some thicker cut fries.

I started with the chowder, since it is best hot. It had a lot of clams and a very buttery taste, but was a bit on the thin side. I found that to be okay since a lot of places over thicken it with corn starch. Russ is not a real chowder fan, but he enjoyed it (with oyster crackers) and only commented on its thinness.

Next I tried the fried shrimp, a dish I have loved since childhood. They were sweet and tasted very good. I dipped them in their homemade cocktail sauce, which had a nice horseradish bite, but wasn’t overpowering.

Fried oysters are not high on my list, since the Army used to serve them to us after dipping them is sand before frying. These were not sandy and nicely fried, but still not my favorite food.

The scallops were very fresh and sweet, but only about the size of a quarter before breading and frying. They were so good I wish they had been bigger.

The fish was probably the best of the sampler. Large moist fillets of nicely cooked, very fresh fish and a very nice homemade tarter sauce in which to dip it.

The tarter sauce was also my favorite for dipping the fries, although I did try some of the cocktail sauce on them – yum!.

Best of all, THE FOOD WAS NOT GREASY, so the new owner knows what she is doing. Greasy food is the biggest turn-off for me at a restaurant like that.

They are still working on the menu, which includes lots of different dishes with chicken and a large selection of seafood. I had hoped to get a to-go menu, but that will have to wait.

Russ and I split an “El Diablo,” the newest burger at Carl’s Jr. It is a charbroiled 1/3 pound Black Angus “Thickburger” with jalapeno poppers, pepper-jack cheese, fiery Habanero sauce, bacon strips and sliced jalapenos on a fresh baked bun.

Russ commented that it was “too busy,” in other words, two many different flavors. But, he did add that the flavors all seemed to work together.

We both liked it, and it was not too spicy However, it is not high on the list of burgers I would order. I still like lettuce, tomato, pickles and some kind of sauce on my burgers. Otherwise I don’t get my “veggies.”