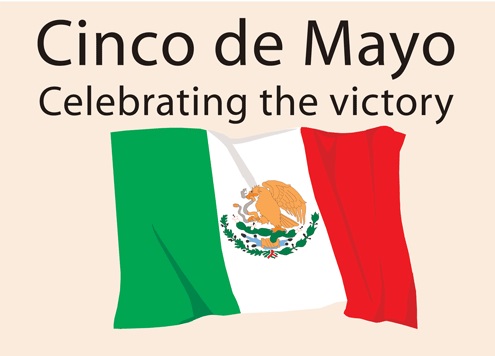 Each fifth of May we celebrate Cinco de Mayo, and while each year more and more Americans are celebrating it, few know exactly what they are celebrating. Most seem to believe that it is a celebration marking the Independence of Mexico from Spain in 1821, but that is celebrated on September 16.

Actually, Cinco de Mayo commemorates a small battle fought on May 5, 1862 called the Battle of Puebla. If it was just a small battle, then why such a celebration and why is it so important to both Mexico and the United States?

After gaining its independence from Spain, Mexico was in serious trouble. Not only was their economy in shambles, but by 1850 they had lost California and Texas, along with other territory, to the United States and much of the southern part of their country had become part of Central America. Faced with hard decisions, as a result of all of this, Mexican President Benito Juarez declared a two year moratorium on the payment of Mexico’s foreign debt. Needless to say, this did not go over well in Europe.

Spain, Great Britain and France held much of Mexico’s debts and on October 31, 1861, the representatives of these governments signed the Convention of London by which they agreed on a joint occupation of the port of Veracruz to collect their claims through the customhouse. The Convention text stated that they were there only to collect what was due them and that they were not to interfere with the right of Mexico to form its own government.

Soon England and Spain reached a settlement with the government of Mexico and withdrew from Veracruz. However, Napoleon III, taking advantage of their leaving, immediately landed 4,500 trained troops and began a march towards Mexico City, where he planned to occupy the country and establish new Mexican Empire with a Hapsburg prince named Maximilian as emperor, and his wife Carolota as empress.

Normally the French would not have been so bold, especially with the United States just to the north. But, in 1862 the United States was in the midst of its own civil war and not prepared to come to the aid of their southern neighbor, in spite of the fact that France had been supplying arms and other military equipment to the Confederacy.

Napoleon’s French Army had not been defeated in 50 years, and it invaded Mexico with the finest modern equipment and trained soldiers. Mexico’s army, on the other hand, was ill equipped and believed to be unable to fight such an army.

Under the command of General Latrille the French Army set out for Mexico City, believing Mexico would be theirs if they could take the capital of the country. After all, this was what always happened in European wars and why should Mexico be any different.

Some report that the French were told that they would be welcomed with open arms at the town of Puebla, some 100 miles from the capital, so they set out in that direction. Little did they know that they had been duped.

The “welcoming committee” at Puebla was under the command of Texas-born General Zaragosa, who had at his disposal a troop of well trained cavalry led by Colonel Porfirio Diaz, a man who would later be Mexico’s president and dictator. Some 4000 strong, the Mexican Army quietly awaited.

On May 5, 1862, over the horizon came the French Army, which, including Mexican “traitors,” had grown to some 8000 in strength. Leading them were the brightly dressed and very elegant French Dragoons, quite a contrast to the unstylish Mexican Army.

With the flanks of his army now exposed, General Latrille sent his infantry charging forward towards the Mexican defenders, in an attempt to drive them from the town. Unfortunately, it had recently rained and the land was muddy, making progress difficult. To add to the problem, the French infantrymen found themselves in the middle of a cattle stampede created by Indians armed only with machetes.

The battle was soon over and the vastly outnumbered Mexican Army was victorious. Unfortunately, one year later the French Army would take Mexico City and install its puppet government.

Because of the Mexican victory at Puebla, and the need for the embarrassed French to rearm and resupply their military in Mexico, the supplies flowing to the Confederacy were substantially reduced. Fourteen months after the Battle of Puebla, the Union Army defeated the Confederate Army at Gettysburg, essentially ending the Civil War.

It is interesting to note that after the surrender of the Confederate Army, General Sheridan rushed Union soldiers to the Texas/Mexican border to supply weapons and ammunition to the Mexicans so that they could throw out the French government. It is also said that American soldiers were discharged with their uniforms and rifles if they promised to join the Mexican Army to fight the French.

How much of an effect those brave 4,000 Mexicans who defeated an army twice their size had on the outcome of our Civil War is often debated by historians. But, that, and our aid in expelling the French, does give us a reason to celebrate Cinco de Mayo, along with our Mexican friends.