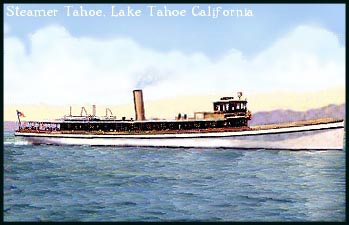 In Part IX, we touched on the subject of the most famous and, according to most visitors of the time, most beautiful steamer to grace the lake, the steamer “Tahoe,” often referred to as the “S.S. Tahoe” and also the “Queen of the Lake.”

The “Tahoe” was commissioned by lumber baron D.L. Bliss. Lumber had made Bliss rich, but the mining activity began to fade and with it the lumber business. Bliss decided to look elsewhere for business and decided that tourism, along with carrying freight and mail, was the real future in the Tahoe Basin.

The steel hull for the “Tahoe” was built in San Francisco in 1894 and then disassembled. The multitude of numbered parts were hauled on huge freight wagons Glenbrook, along with her two steam engines and wood-fired boiler. On June 24, 1896, in a lavish ceremony, she was launched into the lake. She was a huge 169 feet in length with a beam of 18 feet. Her two large steam engines each drove an underwater propeller and, according to some, she could reach the amazing speed of 18 knots, mostly because of her narrow beam.

Luxurious passenger travel on the lake was the goal of Bliss and he spared no expense to outfit the “ Tahoe” in a magnificent manner. Her cabins were paneled in the most expensive of woods, crystal light fixtures were everywhere, marble counters and brass fittings abounded, the carpet was handmade and the furniture was upholstered in leather. Meals were served on porcelain, with silver utensils, crystal glasses and linen tablecloths. With all this, including steam heat throughout and hot and cold running water in the lavatories, she was indeed the “Queen of the Lake” and the height of luxury.

Steamer Tahoe picking up mail, freight and passengers at Glenbrook

For years she made a daily circuit of the lake, and leaving every morning from Tahoe City with the mail and freight from the previous night’s train, and returning in late afternoon. In her round trip she delivered and picked up freight and mail at all of the major landings, while carrying up to 200 passengers. But the same narrow beam that allowed for her high speed was not always conducive to comfortable passenger travel, especially when the weather turned, which it often did.

Because Lake Tahoe is in a high mountain valley, the winds and weather are very unpredictable. One moment things could be completely calm and the next the lake could be choppy and full of waves. The fickleness of the lake’s weather had been the downfall of the large sailing vessels that had carried everything around the lake for many years, often keeping them in port to await better weather. The owners hoped things would be different with a steamer the size of the “Tahoe,” but although she could venture out in nearly any weather, when the winds came up and the whitecaps grew, the steamer rolled unmercifully. Needless to say, when this happened the passengers wanted more than anything to return to dry land. Unfortunately for them, when the weather was bad the “Tahoe” could not make much speed back to her home port, again because of her length and narrow beam.

The Bliss family sold the “Tahoe” in 1920 and she continued to operate on the lake until 1934. Much of the tourist business had been lost when the road around the lake was completed in 1926, but it was losing the lucrative mail contract to the faster, gasoline powered “Marian B.” in 1934, that ended her career. Without the income from the mail it was no longer profitable to run her, in spite of the fact that her wood fired boilers had been converted to more efficient oil in 1908. In 1935 she was tied up to the dock at Tahoe City and left to the elements.

By 1940 the once proud “ Tahoe” had badly deteriorated and thieves had removed many of her fittings and furnishings as souvenirs. Word rapidly spread that a Japanese company wanted to purchase her for the steel in her hull, probably to be used to make weapons of war. But, true or not, that didn’t happen.

None of this set well with William S. Bliss, the son of the original owner, so he bought the vessel back from the company to whom he had sold it. Most likely as a memorial to the bygone era of steam traffic on the lake, he sadly ordered her scuttled.

Anything left of real value was removed from her and on the afternoon of August 29, 1940, the “Tahoe” was towed to a point off Glenbrook, by the cruiser “Quit-Cha-Kiddin’.” Her sea cocks were opened, but she simply refused to sink. It wasn’t until three o’clock the next morning that went to her final resting place on the bottom of the lake, where she still lies in nearly 400 feet of water. Some say that the crew of the “Quit-Cha-Kiddin’,” fearing repercussions, went into hiding for a time.

Recently a video of her resting proudly upright on the bottom of the lake has been produced and a series of dives started in 2002 to investigate the remains of the “Tahoe.”
Walter S. Hobart’s former cruiser, “Quit-Cha-Kiddin’,” which towed the Tahoe on her last trip is currently being restored and will be available for public viewing at the Tallac Historic Site near Richardson Marina.

← Lake Tahoe – “The Lake of the Sky,” Part IX – The Early Steamers on the Lake
Steppin’ Out – Danette’s Brick Oven Pub →