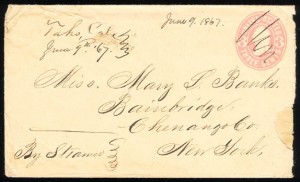 SUNBEAM – This post office was established on Apr. 6, 1888 at a location on the west side of Lake Tahoe, some two and one-half miles south of McKinney (Placer County) and nine miles north of Tallac.

It is known that the first postmaster was Dietrich Kaiser, but there is no record of the origin of the name.

On Oct. 14, 1893 service at this post office was discontinued and the mail moved to the post office at McKinney.

TAHO – This post office, originally named Lake Valley for its location at the southern end of Lake Tahoe, was established on Dec. 26, 1863 with Underhill Van Wagner serving as the first postmaster.

The name is believed to be a corruption of the Washo(e) Indian word “Tahooee”, meaning “much water.” Service was discontinued on Dec. 20, 1870 when the name of the post office was changed to Tallac.

TAHOE KEYES – The Tahoe Keyes Post Office, named for what was originally a vacation and recreation marina on the south end of Lake Tahoe, was established on Aug. 17, 1959 as a branch of the Tahoe Valley Post Office. Since it was a branch of another post office, it had no postmaster.

On July 1, 1962 service at this branch was discontinued.

TAHOE PARADISE – Formerly known as the Meyers Post Office, the Tahoe Paradise Post Office was established on Aug. 1, 1962 as a rural branch of the Tahoe Valley Post Office.

TAHOE VALLEY – This post office was established on June 12, 1940 with Alvan W. Lampson serving as its first postmaster.

A Lake Tahoe vacation resort, it was located three and one-half miles southwest of Al Tahoe and five miles southeast of Camp Richardson.

TALLAC – This post office was established on Dec. 20, 1870 as a result of the change of the name of the Taho Post Office, with Ephraim Clement as its first postmaster.

Located on the south end of Lake Tahoe, five and one-half miles west of South Lake Tahoe, it obtained its name from an Indian word meaning “large mountain”.

Service was discontinued on June 16, 1927 when the name was changed to Camp Richardson.