SALMON FALLS – The post office at this 1848 mining camp located on the South Fork of the American River a few miles northeast of Folsom City was established prior to Oct. 7, 1851, the date the first postmaster, George Coon, was confirmed by the Post Office Department in Washington, D.C.

The name of the mining camp and the post office came from the display of salmon spawning below the falls near this camp.

SHINGLE SPRING – The post office at this early mining town and shingle mill site along the main immigration road from the east to Sacramento, was established on Feb. 3, 1853 with D. Thomkins serving as the first postmaster.

SLATINGTON – This post office, at the top of Chili Bar Grade, six miles north of Placerville, was established on Mr. 3, 1903 with James McGraw as its first postmaster.
Its name is derived from the hand split slate shingles that were made at a mine nearby. 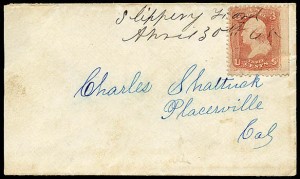 SLIPPERY FORD – This early post office, thirty-three miles east of Placerville along the South Fork of the American River, was established on Nov. 21, 1861 with Powell Crosley serving as its first postmaster.

The name came from a large, slippery rock that made the river crossing (ford) very hazardous.

A few miles to the east was another crossing of the river known as Slippery Ford. The location of the Slippery Ford House which flourished as a stop along the road to the gold and silver mines of Virginia City, Nevada during the 1860s. The two are often confused. This second one was later known as Twin Bridges.

SMITH’S FLAT – This post office, located three and one-half miles east of Placerville, was established on Jan. 31, 1876 with George B. Raffetto as postmaster.

Named for Jeb Smith, a pioneer rancher, it was on the main road between Placerville and Lake Tahoe (Highway 50) until the freeway bypassed it in the 1960s.

On Sep. 7, 1895 the name of this post office was changed to one word, Smithflat, with the “s” dropped. The Smithflat Post Office, originally in the Smith Flat or Three Mile House, was discontinued in the 1980s and the mail moved to Placerville.

SOMERSET – The Somerset Post Office was established on Aug. 1, 1950 with a name change from Youngs. Previously the post office was at a resort known as Youngs, a short distance to the north on the North Fork of the Cosumnes River. It was closed and moved to this location. The first postmaster at Somerset was Aimee Hicks.

The name for this community (and later the post office) at the intersection of Mt. Aukum Road and Buck’s Bar / Grizzly Flat roads, was given to it in about 1856 by some early settlers from Somerset, Ohio.

The Somerset Post Office, which is thirteen miles southeast of Placerville, is still in operation.

SOUTH LAKE TAHOE – This post office, serving most of the California communities at the southern end of Lake Tahoe, was established on Mar. 24, 1967 when several small towns were incorporated into the City of South Lake Tahoe and the post office at Bijou closed. Willis W. Brown was the first postmaster. This post office is still in operation.
Sources for this story include, “History of California Post Offices, 1849-1976”, researched by H. E. Salley (1976); “The Gold Rush Mail Agents to California and Their Postal Markings”, by Theron Wierenga (1987); “California Town Postmarks, 1849-1935”, by John H. Williams (1997); “Short Stories Regarding The History of South El Dorado County”, by D. A. Wright (undated); the “History of El Dorado County”, by Paolo Sioli (1883), reprinted and indexed by the El Dorado Friends of the Library (1998); and the archives of the Mountain Democrat, Empire County Argus and Placer Times (on microfilm at the El Dorado County Main Library).