MENDON – This early post office was established on Dec. 2, 1867 at a location 28 miles southeast of Placerville and 27 miles northeast of Sutter Creek (Amador County). Also known as Brownsville, although there was no post office by this name, the first postmaster, J. Edmondson tried to name it after himself and, when prohibited from doing that, simply rearranged some of the letters in his name to make up the community’s name of Mendon.

MEYERS – This seasonal post office was established on Oct. 6, 1904 at the southwest end of the Lake Tahoe basin with Charles G. Celio as the first postmaster.
Originally a stage stop on the American River route across the Sierra Nevada (also known as Yank’s Station), it was named for Dudley Meyer, an 1850 homesteader. On May 31, 1957, it was discontinued and, one year later, on May 1, 1958, reestablished as a rural station of the Tahoe Valley Post Office.

The Meyers Post Office was discontinued on July 31, 1962 and its name changed to Tahoe Paradise, the name of a very large residential subdivision in the area.

MORMON ISLAND – Now part of Sacramento County and inundated by Folsom Lake since 1955, this post office, which was located on the South Fork of the American River, three miles northeast of Folsom City, was established prior to August 7, 1851 when John W. Shaw was confirmed as Postmaster in Washington, D. C.
Ex-members of the Mormon Battalion discovered gold here in 1848 and it rapidly became a large mining area.

The post office was discontinued on October 15, 1890 and moved to Folsom City.

MOSQUITO – The Mosquito Post Office was established on September 9, 1880 with Jane Dickinson serving as the first postmaster. It was named for the nearby Mosquito Creek and located nine miles to the northeast of Placerville and 21 miles southeast of a place called Lava.

The Mosquito area, which was a major mining location in early California, is often referred to as Swansboro, the name of a large land development which itself was named for an early family in the area, although spelled differently. Service at the Mosquito Post Office was discontinued on Oct. 11, 1881 and reestablished on Nov. 12, 1892. Service was again discontinued on Oct. 31, 1895 and the mail moved to Placerville. 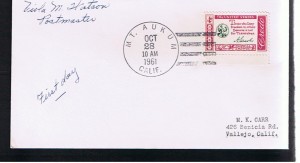 MT. AUKUM: This post office in the southern part of El Dorado County was first established on September 23, 1895 as the Aukum Post Office. Service was discontinued on August 31, 1914, with the mail then directed to the post office in the town of Uno. On April 9, 1920 the Uno Post Office was discontinued and the mail moved back to Aukum.
Because much of the mail destined for Aukum went instead to Auburn, the U. S. Post Office Department officially changed the name of this post office to its present Mt. Aukum on October 28, 1961.

The location for this town named for the nearby peak is officially listed as five miles north of Oleta, the original name of the post office in Fiddletown (Amador County). Aukum, often spelled Aurum, Oakum or Orcum, is apparently derived from a Miwok word, which may be the word Ochum, one of the names they gave their dwellings. The first postmaster was Lydia A. Wrigglesworth (Wigglesworth?).

The Mt. Aukum Post Office is still in operation.

MUD SPRING(S) – The Mud Spring Post Office was established prior to Nov. 6, 1851, the date the first postmaster, Darwin Chase, was confirmed by the Post Office Department in Washington, D.C.

This post office was so named because the thousands of immigrants traveling along this part of the immigrant trail, between Diamond Springs and Shingle Springs, watered their stock here, muddying the spring and the surrounding land. On Dec. 15, 1855, the name of the post office was changed to El Dorado with George W. Critchfield serving as its first postmaster.

Named after the Spanish word for “The Gilded One,” because of the number of rich gold mines in the area, the El Dorado Post Office has continuously operated since it was first established.