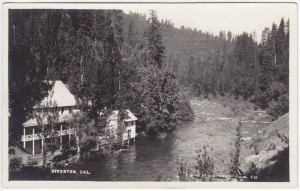 Today’s Riverton is where Highway 50 crosses the South Fork of the American River and Ice House Road goes north towards the Crystal Basin. Records as far back as 1864 indicate the existence of a respectable inn, the Riverside House at this location. It was the first station east of Sportsman’s Hall to service the Central Overland Express and was the first Pony Express remount station east of Sportsman’s Hall.

From August 2, 1892 to May 31, 1898 a Post Office was located here with Charles Sandfoss serving as the first Postmaster. The Post Office was later closed and moved to Slippery Ford (Twin Bridges).

By the early 1900s a large hotel had been built over the river which even allowed guests to fish from their room if they wished.

The main building and several annexes could house upwards of seventy-five guests at one time, who were “lulled to sleep by the roar of the river,” according to one author.

Just west of the present bridge is a plaque designating Moore’s (Riverton) as a California State Historic Landmark (#705). The three remaining rock monuments were part of the four identifying the corners of the bridge over the river.

From Riverton, the main road (Highway 50) again starts its climb to the summit. At Pollock Pines, the elevation was around 4000 feet, but the road from there to Riverton has been downhill and that elevation will not be reached again until a point near Kyburz.

The first station east of Riverton may or may not have been Pauline’s Phelps Place. Both Pauline’s and Riverton are often referred to as Moore’s, which is usually considered to be Riverton. But, since the station at Whitehall is some two plus miles from Riverton, there is a likelihood that Pauline’s could have existed on the road between them.

Whitehall was originally a relatively small building on the river with a “Club Room” and lobby on the first floor and sleeping rooms above. In the early 1910s it was owned by Bert Randall who boasted “the best kegged beer on the great turnpike.”

Mr. and Mrs. Virgil Jones bought the property from L. H Christainson in 1935 and fully renovated and modernized Whitehall Resort, adding a new lunch and cocktail room, large dining room overlooking the river and a dance floor that would hold 30 couples.

Whitehall is where Ogilsby Grade rejoined what is now the approximate alignment of Highway 50.

A mile further east was Uncle Johnny Maze’s Roadhouse, also known as the Snuggle Inn and Phillips Station (not to be confused with the Phillip’s Station nearer the summit). A short distance further is McMurtrys, and then Saul Perrin’s Roadhouse at Silver Fork.

Saul Perrin’s Roadhouse was a thriving business during the early 1860s when the road was end to end with freight wagons heading to and from Virginia City.

Since Silver Fork is where Brockliss Grade rejoined Highway 50, all of the traffic passed by Perrin’s. In the early part of the 20th century, the roadhouse would be replaced by the Silver Fork Inn.

The next station, Sugar Loaf House (Webster’s Station, Dick’s Station, McConnaha’s), was a remount station for the Pony Express in 1860 and in 1861 a horse change station for Pioneer Stage Company. It was a popular stop for teamsters from 1860 to 1868, and received its name from the huge rock upthrust to the northeast, above the road. There is a plaque at this location designating Webster’s (Sugar Loaf House) as a California State Historic Landmark (#706).

To the east of Sugar Loaf House is Kyburz, which has been known by many names over the years, including Dick Yarnold’s Toll House, Dick’s Station, Johnson’s Station, Leon’s and apparently, Slippery Ford.

There is slim evidence to support the contention that an early pioneer working for John Sutter, Samuel Kyburz, established the first station at this location, in preparation for Sutter’s expected hordes of emigrants.

The large, mansion like hotel at this site was built in 1856 and lasted 102 years until it burned down, leaving only its foundation on the north side of the highway, across from the general store which was built in 1860.

In the early 1900s, when the government announced plans to establish a Post Office here, the Kyburz family, who owned the station from 1898 until 1945, had the town officially named Kyburz in honor of their father Samuel. The Post Office opened on January 13, 1911 with Albert Kyburz as Postmaster.

Kyburz is also the location of one of the County’s smallest school districts, Silver Fork, which was opened in 1940 with Laura Eckman as its first teacher.