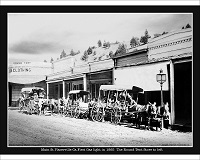 The Placerville & Sacramento Valley Railroad had reached Shingle Springs in 1865 and planned to reach the City of Placerville a short time later.

Expecting to soon replace Shingle Springs a the major freight center for the mines in Nevada and the east, the Common Council of the City committed some $300,000 of bonds towards the cost of bringing the tracks into the City. For many reasons, some financial, but most political, the tracks had not been extended much beyond Shingle Springs by 1872.

By this time the Central Pacific Railroad tracks had crossed the Sierra Nevada and, as a result the freight traffic to the east – the same traffic that the City had expected would easily pay back the City’s commitment – took that easier route eastward, bypassing the City.

It had been two decades since the discovery of gold and times were not very good in Placerville. Most easy mining had played out and the City had serious financial problems. The City did not have the money to pay off the $300,000 in railroad bonds that had been issued. Because of this the bondholders filed suit and won. When the telegraphed news reached the Placerville Common Council, they took the easy way out. They all simply resigned, leaving no one in charge or responsible for the payment. The pages of the minute books of the Council of the City of Placerville are empty from that point into the 1900’s, when apparently, the whole problem had become forgotten history and the City Council thought it safe to return. In spite of all of this, the City survived. After all, it was now the County Seat and still had its people and their continuous pioneer spirit.
From the beginning, Placerville had served as a major business center for the miners, emigrants and settlers. The town had been built at the perfect location, the intersection of the main route between the northern and southern mines (Highway 49) and what was the major immigrant route and freight road over the Sierra Nevada (Highway 50). In good times the City prospered, in bad it was still able to survive.

There was a time when Placerville was a solid mass of houses and businesses, a time when the immigrant road through town was jammed end to end with both arriving pioneer families and freight wagons. a time when the earth yielded gold at the touch, a time when riches were counted in ounces not dollars. Many made their fortunes here, mostly as businessmen. Some, like Studebaker, Armour and Crocker, left the town for other locations where they would increase their wealth, but many, like Cary, Bee, Morey, Elstner and O’Donnell, remained to leave their name in the history of Placerville. By 1856, things began to slow down. Most miners had left for the large underground mines to the north and south and Placerville began to lose its radiant, youthful beauty. Then, disaster struck in the form of fire.

The first great Placerville fire began on April 15 of 1856 in the Iowa House on Sacramento Street. It rapidly spread to the Orleans Hotel, the Placer Hotel and many neighboring buildings which, with the exception of the post office and a few others, were all built of highly combustible materials. The fire department, with the assistance of many of the City’s citizens, were able to stop the fire before it spread much further, but the story would be different a few months later. On July 6 of the same year, Placerville was swept clean of nearly all its buildings, including the Empire and Placer theaters, by an enormous fire. This fire, like similar ones in Diamond Springs and Georgetown, each within two months of each other, was of suspicious incendiary origin. Nearly three months to the day later, the flourishing village of Upper Placerville met a similar fate when a fire broke out in the Pittsburgh House, supposedly started accidently by one John Murdock, who had a room at the hotel and went to bed in an intoxicated state. Unfortunately, he did not survive to tell his side of the story. All of Placerville was rebuilt, but this time with mostly brick and stone buildings.

Although various businesses have occupied them over the years, many of the large, more permanent and more fireproof buildings that soon went up along Main Street are still there, some still emblazoned with the name of the original owner. One such building was erected on the site of the old El Dorado Hotel, once owned by Mr. Elstner in who’s hay yard across the street the infamous “Hangman’s Tree” stood. This brick building, the Cary House, was built by a Mr. W. M. Cary, the owner of the Placer House, and, although rebuilt once since then, has remained as a hotel for the past 140 years. Underneath, in the ashes of the El Dorado Hotel, lies a bit of Placerville’s early history, for it was in the saloon of the El Dorado Hotel that it is said a miner who had struck it rich ordered the most expensive meal that money could buy and, as a result, the cook created the combination of eggs, oysters and bacon now known worldwide as Hangtown Fry.

In 1858 gas light was introduced into the city, the gas being generated by burning pitch pine wood in a vast furnace and from there distributed throughout the city by cast iron pipelines. A few years later, coal would be brought in from Buckeye canyon in Amador County to replace the wood.
On July 19 of the same year, the first overland mail stage arrived in Placerville to the delight of all. Mr. Cary illuminated his new hotel for the occasion, but since the stage arrived at 10 p.m., much of the town had gone to bed. Because of this, it was not until the next evening that a jubilee was held in the Plaza (bell tower area) to celebrate the event.

The city would continue its cycle of ups and downs for the next three decades or so, until March 29, 1888, when the railroad tracks would finally reach the city, providing easy access to the remainder of the country, and the world for that matter, for the products and services of El Dorado County.