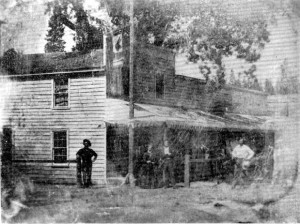 Placerville: the Ravine City; Old Dry Diggings; Old Hangtown – under many names its history goes back almost to the very start of the California Gold Rush. The place that we now know as the City of Placerville started out in controversy and, some say, continues to remain there.

The honor of “discovering” Placerville is usually given to three ranchers who resided east of Sacramento along the Cosumnes River, William Daylor, Jared Sheldon and Perry McCoon.

In the Summer (with the French Consul being here in June of 1848, it now appears the discovery was in the Spring of 1848) brothers-in-law Daylor and Sheldon, along with their friend McCoon are said to have stopped in a ravine along the banks of the North Fork of Weber Creek (now known as Hangtown Creek) several hundred yards below the crossing of what is now Highway 49. There they found gold in good quantities.

One day, an Indian in their employ, while searching upstream, located gold laden dirt on the hillside above the creek and reported his find back to them. After investigating the site, the three decided their present workings were as good, if not better.

When other prospectors came along they were immediately directed to the new location, which shortly became known as “Old Dry Diggings”. This name only lasted until January of 1849 when the town became known throughout the Mother Lode as “Old Hangtown” or just “Hangtown”

There are many accounts relating to why the name of this fair town was changed to Hangtown – all true, we’re told.

Paolo Sioli, in his “History of El Dorado County” (1883), felt that there were three that needed to be considered because they came from people who were “distinguished citizens and oldest pioneers” and the stories were “corroborant and supplement on to another”. The reader is free to judge for him or her self.

The first of these comes from one Judge Grimshaw of Daylor’s ranch. His tale starts in January of 1849 with three men playing poker in a saloon tent or hut in Old Dry Diggings.

One of them soon lost all of his money and suggested to the others that the sleeping proprietor of the establishment surely had a good amount of gold dust on hand which they could easily appropriate.

The saloon keeper was rudely awakened by the cold feel of a gun to his head and was ordered to tell the three where he kept his gold dust. Fearing for his life, he told them and the three soon divided up the spoils.

Although threatened with death if he did so, the saloon keeper told some friends and the robbers were soon caught, tried by the miners, flogged and ordered to leave town.

A few days later two of them, under the influence of alcohol we’re told, returned and proceeded to threaten the miners who had ordered them flogged. The threatened miners got together, had the two arrested and then hung them from “the leaning oak tree in the hay yard below Elstner’s Saloon” (now Hangmen’s Tree Historic Spot).

Another version of the story comes from E. N. Strout, a gentleman who by 1883 had been a “long time citizen of El Dorado County.”

He relates that by early 1849 there were organized bands of desperadoes in the area of Old Dry Diggins, who lay in wait in and outside of the camp, ready to plunder and murder.

A Frenchman who kept a trading post in Log Cabin Ravine (Bedford Avenue) was known to have considerable gold dust and was selected as their next victim by a band of desperadoes known as the “Owls.”

Four men: one American, one Mexican and two Frenchmen, were picked by the band to rob the merchant of his gold dust, and anything else they could carry off.

Soon after the crime was committed, the merchant gave the alarm and almost immediately a group of vigilantes captured all four desperadoes.

After a quick trial, three of them – one of the Frenchmen having escaped after being sentenced – were hung from a white oak tree that stood on the south bank of the North Fork of Weber (now Hangtown) Creek, near what is now the corner of Main and Center (formerly Coloma) streets.

The three were wrapped in blankets and buried on the north side of the creek. The office of the Mountain Democrat was erected over the site of the graves a few years later and the paper was published there for some twenty years. There is now an interesting historical marker near the burial site.

The third and final version, which Sioli oddly attributes to no one, has its origin in an 1849 hanging of three men, two of them being Frenchmen and the other a Spaniard.

The three had been arrested for highway robbery on the road leading to Georgetown and were being tried by a jury of local citizens. During the sentencing proceedings, while the jury was pondering the fate of the robbers, an officer from a neighboring community arrived in town searching for the perpetrators of a horrible murder in his area. He immediately recognized two of the robbers as the murderers he sought.

With this information, the jury took no time in sentencing the three to be hanged from a tree at the northwest corner of Main and Coloma streets and having the sentence carried out.

This third version is the one most often told. It is nearest to the story told by Edward Gould Buffum, a journalist, soldier and miner, in his book, “Six Months in the Gold Mines” (1850), and matches closely the stories found in the “Alta California,” the major newspaper in San Francisco at that time.

No matter which version is true, if any, Old Dry Diggings immediately became known as Hangtown – a place where “Judge Lynch” often presided, dispensing rapid justice to all of those who dared to ply their criminal trade. Some historians do point out that this had a positive effect on the area by bringing about an immediate reduction in serious crime in and around this place now known as Hangtown.

With more and more miners and in many cases, whole families, arriving in town, civilization began to replace frontier justice in California. Within the next few years, El Dorado County would become one of the first twenty-seven counties of California, California would become the thirty-first star on the flag of the United States and the town known as Hangtown would be incorporated as Placerville – on more than one occasion.