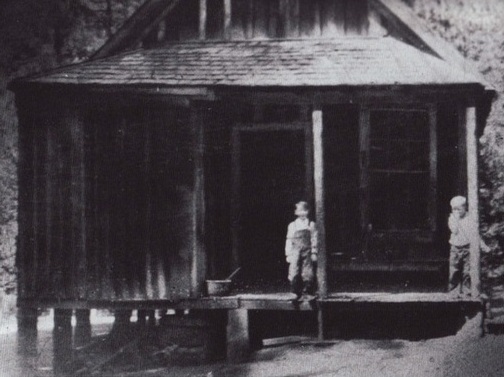 The first report of the discovery of gold at what would become the town of Indian Diggings, occurred in 1850 when a party of white men from Fiddletown (formerly called Oneida and then a part of El Dorado County) came across several Indians panning gold in the bed of what would soon be known as Indian Diggings creek.

Located some twenty-five miles southeast of Placerville near the Amador/El Dorado County line, the town of Indian Diggings soon became one of the richest surface and creek “diggings” around, and by 1855 was one of the largest towns in the southern part of El Dorado County with nine stores, five hotels, the usual number of saloons and some two thousand people.

The first school was located about half way between Indian Diggings and Omo Ranch, some three miles distant. When the mining town was effectively abandoned, the school was closed and moved from the canyon up onto the ridge.

These two new ditches cost a sum of $200,000 each and supplied the miners of Brownsville, Indian Diggings, Cedarville, Fair Play, Spanish Creek and, across the county line to the south, Pokerville (Plymouth), Arkansas Diggings, Michigan and Cook’s bars.

The town, including every store, hotel and saloon, was totally destroyed by fire on August 27, 1858. After being rebuilt, fire again swept through the town only three years later, leaving much of it in ashes. A third major fire occurred many years later, when Justice Jinkerson ordered the intentional burning of a row of shacks called the “Street of Painted Ladies,” because the town was taking on a somewhat tarnished reputation and the name “Whore House Gulch.”

Although the town suffered through several major calamities, it is better known for the interesting acts of some of its citizens.

In the summer of 1855 a ditch superintendent left town taking along all of the ditch company’s money and another man’s wife. Caught at Nevada City, the man gave up the money, but kept the wife.

A few months later, at a performance of a traveling circus, a husband was confronted by another man who had taken the injured party’s wife to the event. After firing several audience alarming shots at the husband, he escaped. Fortunately, the husband recovered, although crippled for life. Who the wife went with is not reported.

Two Indian Diggings’ miners arguing over a game of ten pins, attempted to settle it by the honorable method, a duel in the middle of the street. Neither man was hit by the other’s pistol bullets, so one of the men went back to his cabin to fetch his rifle. Before he could return and do any real damage, some friends intervened and settled the argument.

In 1860, a dispute over water rights occurred between some miners living on Cedar Creek and a Dr. O.P.C. White, who had dammed the creek. When they tried to destroy Dr. White’s dam, he killed two of them, McGee and Sweeny, and injured the third, Delory. With the aid of friends he succeeded in avoiding arrest and the next spring left California to return to his home State of Tennessee where he lost his life in the Civil War.

The day of the murder, the Coroner, Dr. Eckelroth, left Placerville for Indian Diggings in the company of a Mike Welch. About ten o’clock that evening they reached Buck’s Bar and found the water running quite high. Welch led the way across and was washed down the rapids and never seen again. Dr. Eckelroth escaped.

By the 1870s, due mostly to the State’s ban on hydraulic mining, Indian Diggings had become almost a ghost town. Its post office, the daily stages, the stores an most of its eight hundred voters were gone. All of the gold mines had closed and the mining industry had been reduced to just the Aitken and Luce marble sawing mill that was started in 1858 and was still producing some of the finest marble for monument, building and ornamental purposes in the country.